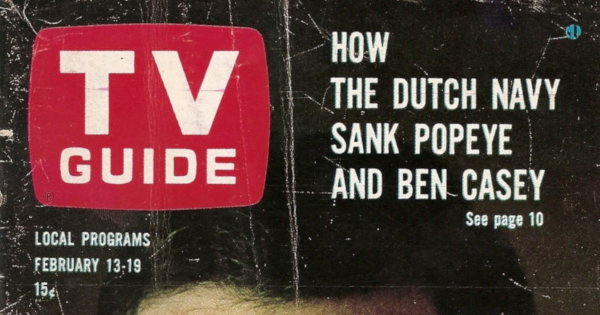 On the Cover: Andy Williams (photograph by Bob Vose).

There are four articles in this issue, all two to three pages long. “Nick the Networks” by Melvin Durslag is a two-page look at how the networks are scrambling to find content to fill their weekly sports programs. Considering the outrageous prices paid for sports rights these days, the amounts the networks had to spend in 1965 seem very low. An unnamed sport that three years earlier was offered for free by the sports group is now costing $50,000. A French cycling group wanted $150,000 for television rights but settled for much less. CBS bid on and lost the rights to NCAA football. NBC paid $13.04 million. Viewers, according to Bill MacPhail, vice president in charge of sports for CBS, want competition. Documentaries, no matter how well produced, are always low-rated. 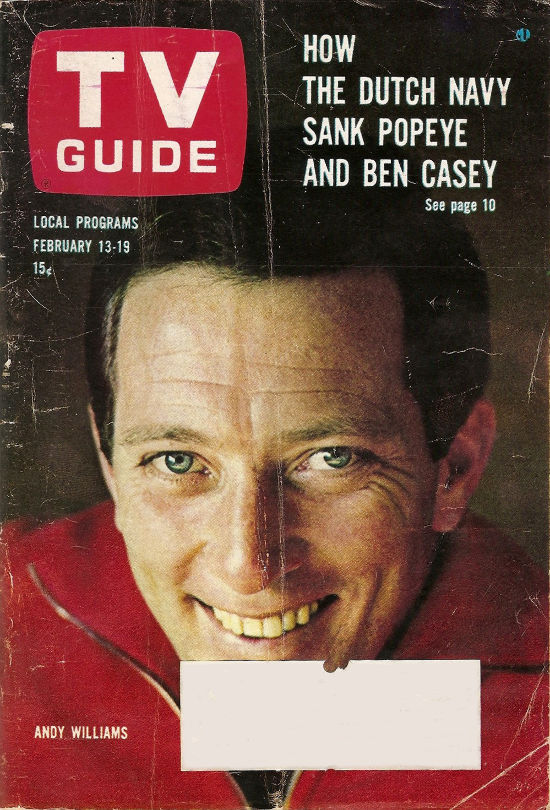 Robert Musel’s “How the Dutch Plugged a Hole in the Dike” is a three-page overview of Radio TV-Nordzee, a pirate TV station that started broadcasting on an artificial island six miles off Noordwijk in September 1964. It brought television shows from the United States – like Wagon Train, 87th Precinct, My Three Sons, and Leave it to Beaver — to Dutch viewers, drawing an audience of 500,000 households. It tried to play it safe by not competing with the national Dutch channels during prime viewing hours. The station sold $100,000 worth of ad time during its first month on the air and that drew the attention of the Dutch Parliament. Things got complicated when the “island” was sold to a company in Panama while another company in London took over operations.

Still, on December 17th the Dutch government shut down the station. It took Navy personnel, police officers, and experts from the Ministry of Justice and the Posts and Telegraph Department to take the station off the air. The “island” was declared Dutch property and the battle moved to the courts. [Check out some footage of Radio TV-Nordzee in action on YouTube.]

“Andy Williams; A Long Way from Wall Lake” by John Gregory Dunne is a three-page look at Andy Williams, another popular TV personality I have very little familiarity with. The article makes him sound like a shrewd businessman particularly when it came to the movies. His seven-year film contract with Universal Pictures protected his popularity by pairing him with other stars who received higher billing. That way, if a movie bombed, they would be blamed for the failure rather than Williams. As for The Andy Williams Show, the only problem facing the NBC variety hour was signing good guests. It had a lot of sponsors which meant a lot of potential guests weren’t allowed due to conflicts with other sponsors.

Producing a show with “personalities” rather than “entertainers” was challenging. For example, an episode featuring Jill St. John and Gene Berry (both personalities) had to work with their talents. “Jill can’t sing very well,” explained Williams, “but she’s in a big production number where the sketch calls for her to be bad. So it will all work out.” She didn’t seem to mind: “They couldn’t get a singer and they couldn’t get a dancer. So they hired nothing.”

Finally, “This Is Jim Backus?” by Jerry D. Lewis is another TV Guide profile that doesn’t offer much in the way of substance. Jim Backus is a walking contradiction (he doesn’t want to hurt anyone’s feelings but is always late for meetings) and is apparently more interested in praising others than talking about himself. His roles on Gilligan’s Island (CBS) and The Famous Adventures of Mr. Magoo (NBC) make him the first actor ever to star in two first-run network shows airing opposite one another. There are a few interesting tidbits. For example, Backus didn’t want to sign on to do Gilligan’s Island but was persuaded by Sherwood Schwartz, who refused to let him see the script but promised the part would be built up.

The “As We See It” editorial addresses clones of The Fugitive being introduced in the 1965-1966 season. NBC had Branded, with Chuck Conners, while CBS has Coronet Blue (as yet uncast). For its part, ABC is adding A Man Called Shenandoah with Robet Horton. Said TV Guide: “It is heart-warming to know that time, creative effort and trouble that is going into television program planning these days. Everyone is searching, searching, searching or something really new, really different, really unique. Searching, searching…”

There is no review this week. Cleveland Amory is busy judging the International Television Festival in Monaco. According to the January 30th issue, Amory’s reviews will return in March.

Rounding out the national section this week is a special feature called “The Sweater Game” in which Caterina Valente models five sweaters, three of them while holding a guitar, as well as a picture feature going behind the scenes of ABC’s February 15th Dinah Shore tribute to the Peace Corps. There is also the regular TV crossword puzzle.

The letters page included three responses to the over-the-top coverage of President Johnson’s illness earlier in the month:

Regarding the overdone TV coverage of the President’s cold–Is it good for the mental health of the Nation to be that “well-informed?”
(Name withheld)
Tucson, Ariz.

You would have thought LBJ was at death’s door. Now really, wasn’t it just a bit ridiculous?
Jeanne Burke
Newark, N.J.

…never have so many missed so much (TV programming) on account of so flu. Worcester, Mass.

Two readers also wrote in to praise NBC’s “The Stately Ghosts of England” while others praised The King Family, Chuck Connors on Branded, and the Hallmark Hall of Fame special “The Magnificent Yankee” (January 28th). Finally, there was a letter from one of the TV critics discussed in the January 2nd issue:

I should amend one part of Edith Efron’s “A Close Look at the Critics.” I have tried to read some of those searching books on television’s problems. Just never finished any. I never came across any that weren’t written with a pompous pen. I hate to say this but my colleague do seem rather a humorless lot. Not one of them asserted the point that being a critic also means entertaining the reader as well as castigating the shoddy–to borrow a phrase.
Don Freeman
The San Diego Union
San Diego, Cal.

I would be remiss if I didn’t mention that this was the week that saw My Living Doll air its first episode without star Bob Cummings, who quit the sitcom in January 1965. He appeared in 21 episodes and the series continued for five more without him. The episode in question, “Boy Gets Robot,” aired on Wednesday, February 17th.

The weekend was filled with sports, of course, with college basketball, horse racing, auto racing, roller derby, boxing, and tons of golf and bowling. From 8:30-9:30PM, ABC aired “The Way-Out Men,” a documentary produced by David L. Wolper examining “a strange breed of men who explore the farthest outposts of human knowledge.” It was advertised as the first in a series of specials about artists and scientists working to expand the future. Here’s a full-page advertisement: 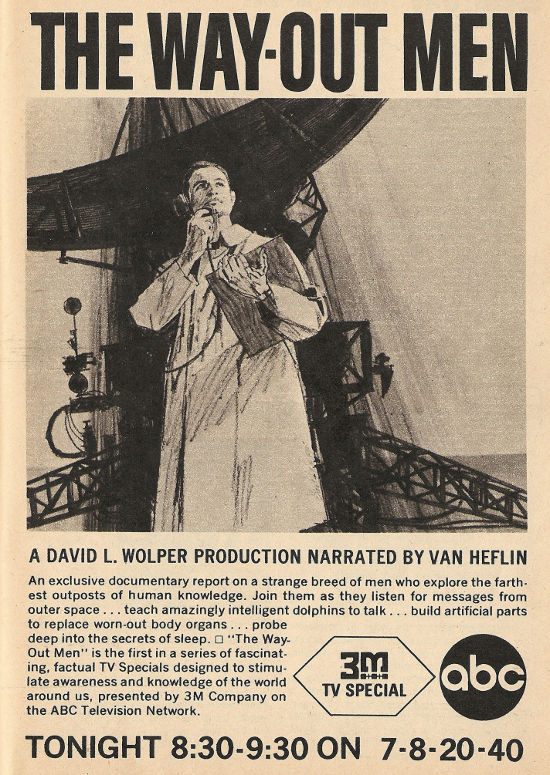 On Friday, February 19th from 7:30-8:30PM CBS aired the last “Young People’s Concert” of the season with Leonard Bernstein once again conducting. It was a tribute to Jean Sibelius on the centenary of his birth. That same night at 9:30PM, ABC aired a 90-minute special called “Who Has Seen the Wind” from 9:30-11PM. It was the second United Nations special (the first, “A Carol for Another Christmas,” received low marks from critics in December 1964). Maria Schell, Stanley Baker, Theodore Bikel, and Edward G. Robinson starred in the production, which was directed by George Sidney. Don M. Mankiewicz adapted the script from a story by Tad Mosel.

It was another packed weekend locally. WTIC-TV (Channel 3) aired an installment of This is UConn from 1-1:30PM on Saturday, February 13th. WBZ-TV (Channel 4) aired another episode of Science Countdown 1965 from 2-2:30PM. WTIC-TV premiered an hour-long syndicated bowling series called TV Bowl, a 13-week tournament, at 3PM. WNAC-TV (Channel 7) aired live coverage of the National Women’s Indoor Tennis Championships from Chestnut Hill, MA at 3:30PM with Bob Gallagher and Bud Collins.

On Sunday, February 14th WTIC-TV aired From the College Campus from 11:30AM-12PM. The topic this week was “The Preparation of Teachers” and the location was Trinity College in West Hartford. WNHC-TV (Channel 8) began airing TV Bowl at 1PM. WTIC’s five-minute Your Congressman featured Emilio Q. Daddario (Democrat, Hartford) from 1:25-1:30PM. From 5:30-7PM WNHC aired live coverage of the final four holes of the Arizona Open.

Finally, here’s an advertisement for Adventures in Paradise in syndication on WHYN-TV (Channel 40): 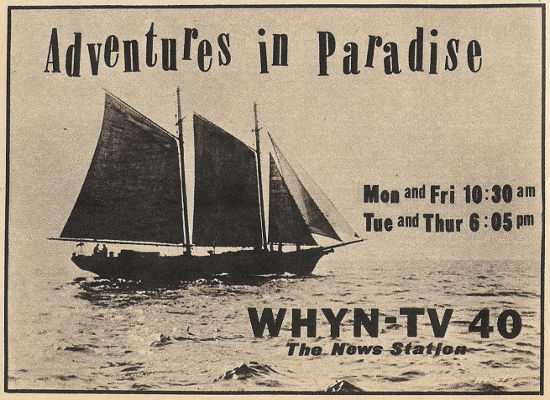 The adventure series originally ran on ABC between 1959 and 1962. WHYN-TV aired it four times a week at various times.

Tuesday, February 16th, 1965
Teen-age representatives from Milton, Newton, Lawrence and Worcester discuss the ways to create a better image of the teen-ager.