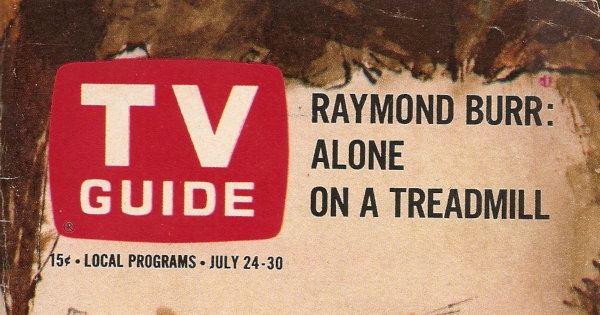 On the Cover: Raymond Burr (painting by Al Parker).

I found this week’s cover article, “Pleading His Own Case” by Dwight Whitney, very interesting. I’ve never seen an episode of Perry Mason and I know next to nothing about Raymond Burr. As described by Whitney, he is an indefatigable promoter of the law and the legal process who risks his life to talk with troops in Vietnam and uses his own money to support causes near and dear to his heart. During his third trip to Vietnam he suffered a severe shoulder injury when the helicopter he was riding in came had to dodge enemy fire. 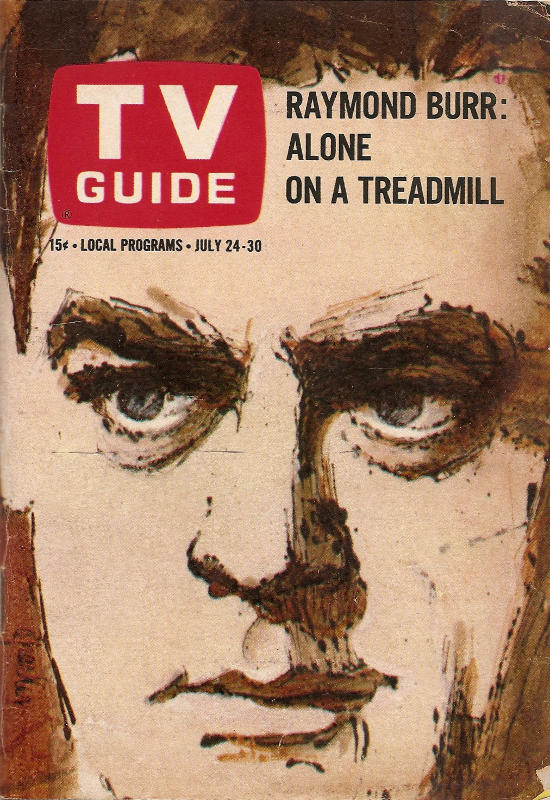 Burr didn’t plan on returning to Perry Mason for the 1964-1965 season (its eighth). He wanted to star in a new show called The Power. “In it I played the governor of a state, and it had some of the same things going for it that Perry did. It was the best damn thing I ever read, the best new show presentation anybody in this business had ever seen.” Unfortunately for Burr, CBS felt The Power would be too similar to its new political drama Slattery’s People, so Perry Mason continued. He then agreed to return once more for the 1965-1966 season because he wanted to give his actors work and because he felt the 1964-1965 season was “a bad year” and hopes to go out on a good year. [Did he? Perry Mason was cancelled at the end of the 1965-1966 season. Hopefully Burr thought it was a good year.]

“Having a Wonderful Time” is a letter written to TV Guide by Sheldon Leonard, producer of I Spy. TV Guide asked him to write about his experience filming the series in Hong Kong and, according to Leonard, hoped he could include some conflict. Sadly, Leonard felt he couldn’t oblige because he was too busy dealing with problems like weather, language barriers, technical issues, and thousands of curious citizens to come up with any conflicts. During their four weeks in Hong Kong, the cast and crew only saw one day of sunshine. They lost two days to a typhoon.

Leonard found the language barrier particularly confusing because the Chinese people were so anxious to please that they would nod whether they understood their instructions or not. He wonders why a translator would take his six-word sentence and spend five minutes translating it. Also causing problems were a driver who wasn’t used to the car being configured for right-hand driving and two stunt men who followed Leonard’s directions to jump into a harbor despite being unable to swim.

Melvin Durslag’s “They Still Come in With Spikes High” is a two-page essay about ABC baseball color commentators Jackie Robinson and Leo Durocher. Both feel very free to speak their minds on the air, criticizing plays and players. According to Durslag, “a feature of Robinson and Durocher opinions is that they are always positive, if not always correct.” Robinson believes that players should always do their best and calls them out if they don’t live up to their abilities. Durocher feels it is his duty to anticipate and explain how he would direct players. If the manager makes a different decision, Leo will argue his way was better.

“The Kid is Dead…Not Coogan” by Arnold Hano is a three-and-a-half-page profile of former child actor Jackie Coogan, currently playing Uncle Fester on ABC’s The Addams Family. Coogan earned a fortune as a child actor but his mother and step-father spent nearly all of it. He sued them in 1938 but the law was on their side. California later passed a law protecting some money earned by child actors. In 1935, Coogan was the only survivor of a car crash that killed his father. During World War II he served as a glider pilot and earned the Air Medal. His life changed on October 4th, 1956 when he appeared in the debut episode of Playhouse 90. That led to more TV work, including a co-starring role on NBC’s McKeever and the Colonel from 1962-1963, and ultimately to The Addams Family.

Finally, there is a one-page article recounting how Sammy Jackson and Laurie Sibbald fell in love on the set of No Time for Sergeants. They initially weren’t very fond of one another. Jackson felt Sibbald wasn’t taking her job seriously while Sibbald thought Jackson was “a wet blanket.” After spending so much time together, however, they fell for each other and are currently “engaged to be engaged.” The cancellation of No Time for Sergeants has complicated things and the two are waiting to see what happens with Jackson’s career before actually getting engaged.

The “As We See It” editorial this week laments the ease with which satellite communications can be interfered with. In 1963, France denied CBS the use of its ground station for “Town Meeting of the World,” meaning the program could not be aired live in Europe. COMSAT recently refused to let CBS telecast the dedication of the Kennedy memorial in Runnymede (England) via Early Bird because the other networks didn’t want to carry it. “It is COMSAT’s responsibility to see to it that the whims of petty dictators in communications be confined to their own countries. It is COMSAT’s responsibility to avoid petty rules (and ridiculously high rates) that could turn a hope for all mankind into a mere gadget in the sky.

Cleveland Amory’s review this week is of ABC’s The Jimmy Dean Show. Amory notes that once Jimmy was allowed to be Jimmy, the show improved. “For country singing or folk singing–and even for city folks who like the country–this show has many virtues. And once in a while you even get a genuine interview.” He criticized, however, the number of plugs for performers’ records, arguing if the performers are being paid they shouldn’t also expect plugs.

Rounding out the national section are a pair of two-page picture features. The first spotlights the new automobile (The Dragula) being added to The Munsters. The second highlights a visit by Fess Parker, in character as Daniel Boone, to the Navajo reservation near Crown Point, NM. There is also the regular TV crossword puzzle.

The letters page this week features six letters on three topics. There are three letters responding to a July 10th article by John Gregory Dunne in which he wondered what an Awful-Awful was. The letters explain that an Awful-Awful is basically a giant milkshake developed by Bond’s Ice Cream Parlor in Upper Montclair, NJ. An editorial note gave specific instructions for the concoction. Supposedly if you drink three, you get a fourth free.

Then there is this letter, written in response to a letter published in the June 19th issue:

Regarding the letter saying that such programs as McHale’s Navy and Gomer Pyle tend to ruin the image of our Armed Forces, if this gentleman prefers more bitter entertainment, such as Combat!, I have at least 50,000 ringside seats in the Vietnam arena–no admission charge.
William J. Tarkington Jr.
News Director, WFAX
Falls Church, Va.

There is also a letter from a reader who wonders if repeats of I Love Lucy “have been re-run into the ground” because her 3-year-old daughter can say the lines before Lucille Ball does. Another letter praises Al Hirt’s show as “a rose among the thorns” this summer.

[This was the fourth issue I had to purchase to fill a hole in my collection. The copy I acquired is the North Texas Edition with listings for nine stations in five markets. As is always the case with issues I’ve had to buy, I’ve done my best to highlight some of the local programming but please note that I’m not familiar with these stations. All of the stations were in the Central Time Zone, so prime time in 1965 started at 6:30PM rather than 7:30PM.]

On Saturday, July 24th CBS aired CBS Bowling Classic from 12-1PM followed by CBS Tennis Classic from 1-2PM. Both programs were airing their last episodes. ABC’s Saturday afternoon baseball game at 12PM was listed as “To Be Announced.” At 9PM, CBS aired the 14th annual Miss Universe Beauty Pageant live from Miami Beach. Jack Linkletter served as master of ceremonies with John Daly and Sally Ann Howes as commentators. The special was scheduled to run 90 minutes.

On Friday, July 30th from 8:30-9PM, Vacation Playhouse on CBS presented an unsold pilot starring Gerald Mohr as an American casino owner living in Mexico who is asked to help smuggle a Mexican revolutionary and his wife out of the country.

The listings section includes listings for the following stations:

Locally, there were a lot of music and religious programs during the weekend. On Saturday, WBAP-TV (Channel 5) aired a half-hour religious program called Planning for Tomorrow from 7-7:30AM. From 3:45-4:45PM the same station aired Gospel Singing Caravan. From 4:30-5PM KRLD-TV (Channel 4) aired a cooking show with David Wade while KTVT (Channel 11) aired Sunset Ranch, a music program.

There were a few weekday afternoon children’s programs, some of which were probably local. KTVT aired Fun Time from 3:55-4PM followed by Slam Bang Theater from 4-4:30PM; KXII-TV aired Carol’s Clubhouse from 4:25-5PM; and KAUZ-TV aired Kauzmo and Friends from 4:30-5PM.

On Monday at 6:30PM, WBAP-TV pre-empted a repeat of NBC’s Karen for a half-hour documentary called “Case for Education” about a proposed Community Junior College. KTVT’s Monday night movie started at 9PM and ended at 11PM but was interrupted from 10-10:15PM for news and weather. The same thing happened on Tuesday and Friday. At 9:30PM, KAUZ-TV aired America!, a travel series hosted by Jack Douglas. This week’s episode was titled “Valley of the Sun” and toured Phoenix, AZ.

From 8-9PM on Tuesday, educational station KERA-TV (Channel 13) aired the 10th installment of Pacem in Terris, a 12-part series of meetings hosted by Harry S. Ashmore. The episode was titled “The Terms of Coexistence: Mutual Interest and Mutual Trust.”

KTVT aired another Spurs-Sonics baseball game at 7:30PM on Wednesday.

Here’s an advertisement for news with Earl Ellington on KXII-TV (Channel 12): 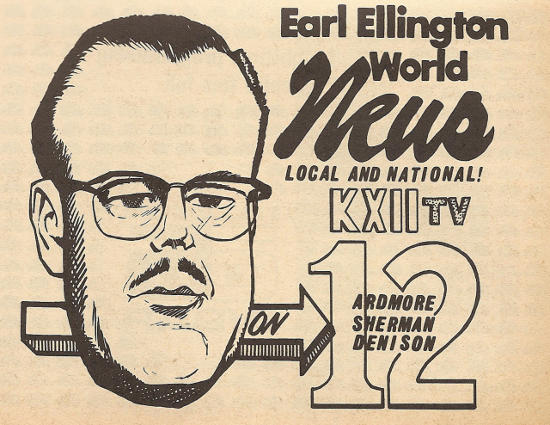 Here’s an advertisement for baseball on KTVT (Channel 11):

Here’s an advertisement for America! on KAUZ-TV (Channel 6): 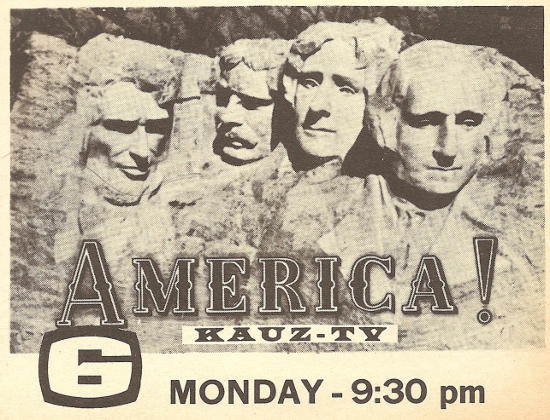