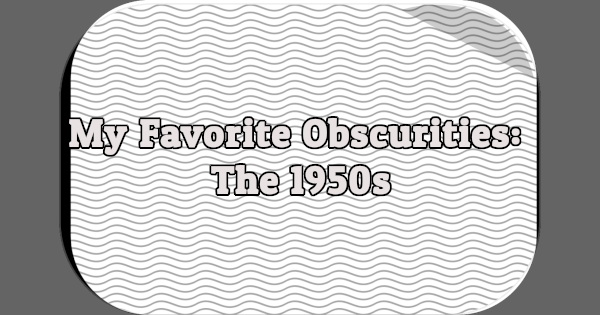 Last month Television Obscurities celebrated its 12th birthday (on June 11th, to be exact). That’s not a milestone anniversary so I didn’t mark the occasion but in recognition of one dozen years online I decided to start examining my personal favorite television obscurities. Once a month I’ll be writing about my 12 favorite obscurities from each decade starting with the 1940s in June and ending with the 2000s in December. Many of these shows I’ve written about over the past 12 years but not all of them. This month I’m tackling the 1950s. So here, in chronological order, are my favorite 12 obscurities from the 1950s:

When this live sitcom debuted on New Years’ Day 1950 it was called Young and Gay but the name was changed to The Girls after just two episodes. Based on the 1942 autobiographical book Our Hearts Were Young and Gay by Cornelia Otis Skinner and Emily Kimbrough, a total of 13 episodes were broadcast live (none of which are known to exist today). The series originally starred Bethel Leslie as Skinner and Mary Malone as Kimbrough. Leslie left the series after nine episodes and was replaced by Gloria Stroock for the last four episodes.

The Girls was set in New York City during the 1920s. I think what I’m most curious is about is how the Roaring Twenties were depicted on television a few decades after they ended.

Not much is known about the prime time version of this series, which initially aired on Saturdays from 8-9PM and later on Thursdays from 8:30-9PM. Each week, the editor of the fictional Hawkins Falls town paper would recount various events in that would then be shown to viewers. It aired live from WNBQ in Chicago.

This sitcom aired live on Saturdays for almost nine months and endured more than its fair share of behind-the-scenes drama. When it premiered, the two Smiths in the title were played by Peggy Ann Garner and Peggy French. Garner left the series in September and was replaced by Marcia Henderson for the rest of its run. In April 1951, a piracy lawsuit was filed against the producers of the series as well as the sponsor and the network by the authors of the book and play My Sister Eileen. Whether that had a role in the cancellation of the series is unknown.

An estimated 210 episodes of this live daytime soap opera were broadcast by NBC during 1951 but only two are known to survive. The Paley Center for Media has the July 3rd and August 24th episodes in its collection. Actress Susan Peters, who was paralyzed from the waist down in a 1945 hunting accident, starred as a New York City lawyer who returned to her hometown in Ohio.

My article on Miss Susan can be found here.

This was the first television version of Meet Corliss Archer, the long-running radio program based on F. Hugh Herbert’s 1943 play Kiss and Tell. It starred Lugene Sanders and aired live on CBS from July to September 1951 and again from January to March 1952. Episodes were staged twice for different parts of the country.

The 1954-1955 syndicated version produced by Ziv Television Programs is much better known than the earlier CBS version. Most or all of the syndicated episodes, which were filmed rather than aired live, survive. Some of have been released on DVD and many are available for viewing at the Internet Archive. To the best of my knowledge, none of the live CBS episodes are known to exist (but hopefully some do).

It was rare in 1952 for a network to cancel a new show as quickly as NBC did with Doc Corkle. The sitcom starring Eddie Mayehoff as a dentist aired for just three weeks before it was yanked at the behest of the sponsor and replaced by Mr. Peepers. Several other episodes were already completed but never aired.

Just how bad could Doc Corkle have been to merit such a quick cancellation? I’m sure I’m not the only one interested in finding out.

I’ve seen three of the 39 episodes of this medical series that starred Ella Raines. At least three other episodes are known to exist, including two held by the Museum of Broadcast Communications. If only I’d watched them before the MBC’s online archives were removed. Raines was the only regular character on the series, a private duty nurse sent out on a new assignment each week. Some were mundane (Janet trying to convince a baseball manager to help a friend of hers) while others were a little more unbelievable (Janet rushing into a trapped elevator that might plummet to the ground at any moment).

My article on Janet Dean, Registered Nurse can be found here.

I can’t say what drew me to this sitcom starring June Havoc as a freshly minted lawyer whose first case involved a dog who scared a cow so it wouldn’t give milk. It was low-rated and according to Havoc viewers didn’t believe that female lawyers existed or, if they did, that they weren’t spinsters. In March 1955, the series was revamped and the setting moved to New York City. Whether that improved ratings is unknown.

My article on Willy can be found here.

The radio version of this sitcom was marginally more successful, running for more than 100 episodes from January 1950 to June 1952. The television version lasted just one season. Both featured Ronald Colman as the president of the fictional Ivy College. Colman’s wife in real life, Benita Hume, played his wife on radio and TV. Also appearing in both versions was Herbert Butterfield as chairman of the Ivy College trustees.

At least one episode survives although I’ve yet to watch it.

Larry Blyden and Nina Talbot starred in this sitcom about a cabby and his girlfriend. It took a torturous route to television, with a planned September 1955 premiere scrapped at the last minute, six completed episodes tossed out, and a new producer brought on board. It almost made it to the air in January 1956 and again in March 1956 before finally debuting in June 1956.

A total of 13 episodes were filmed and aired. I haven’t seen any of them. Although I’d like to, I’m actually more interested in seeing the six episodes that were scrapped and never aired. Reportedly CBS didn’t think they were very entertaining.

My article on Joe and Mabel can be found here.

I think the name of this sitcom caught my attention more than anything else. It’s been on one of my various “shows of interest” lists since 2009. Patty McCormack starred as Torey Peck, the titular bad girl but despite the name of the show, Torey wasn’t bad at all (which may have disappointed viewers who knew McCormack for her role in The Bad Seed). Wendell Corey played her father, Steve Peck. Rounding out the cast were Marsha Hunt as Torey’s mother, Jennifer, and Ray Farrell as her younger brother, Roger.

I never thought I’d get the chance to see it until Alpha Video released an episode on DVD in December 2013. The video quality is poor but watchable. The plot involves Torey wanting to wear lipstick to a party and her father refusing to let her.

Very few of my favorite obscurities are easily viewable. This is one of them. Mr. Lucky is a popular obscurity if there ever was one; a number of episodes were released on VHS in the late 1990s and the full series was released on DVD in October 2012. I’ve watched 26 of the 34 episodes and one day will get around to watching those last eight. Some of the episodes are a little dull but for the most part they’re enjoyable.

There’s nothing unusually interesting or odd about this half-hour adventure series except for two things: the concept was changed abruptly halfway through the season due to pressure from sponsors and it ended the 1959-1960 season in 21st place but was nevertheless cancelled.

My article on Mr. Lucky can be found here.

Hit the comments with your thoughts on these shows and any favorite TV obscurities you may have from the 1950s. Check back next month for my 12 favorite obscurities from the 1960s.