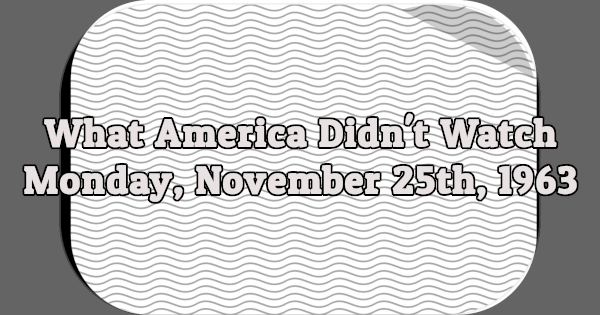 What We Didn’t Watch is a four-part special feature focusing on network prime-time programming pre-empted in November 1963 by coverage of President Kennedy’s assassination, its aftermath and his funeral. The networks aired news coverage and a few specials but no regular programming and no commercials. Most of the scheduled programs were aired at a later date. All times are Eastern.

This was the last day the networks would pre-empt their planned programming for continuing coverage of President Kennedy’s assassination and funeral.

CBS pre-empted shows like Captain Kangaroo, Search for Tomorrow, As the World Turns and The Secret Storm.

And NBC pre-empted shows like Today, Word for Word, Truth or Consequences, People Will Talk and Match Game.

Here’s a rundown of the prime time schedules for each network, with rescheduled airdates. There are a lot of sources online that state the “A Date for Gomer” episode of The Andy Griffith Show aired on Monday, November 25th but it most definitely did not.