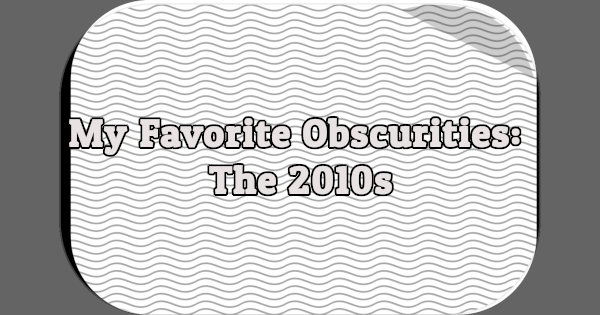 Note: I accidentally published an incomplete draft of this post in August 2020.

Back in 2015, in celebration of the 12th anniversary of Television Obscurities, I shared my 12 favorite obscure TV shows from every decade starting with the 1940s and ending with the 2000s. I started working on a similiar list of my favorite obscurities from the 2010s more than a year ago but never got around to finishing it until now.

Here, in chronological order, are my favorite 12 obscurities from the 2010s:

I am a huge fan of Perfect Couples. Maybe the show’s biggest fan. The cast–Christine Woods, David Walton, Hayes MacArthur, Kyle Bornheimer, Mary Elizabeth Ellis, and Olivia Munn–is perfect, the writing is perfect, the theme song is perfect. I was devastated when NBC cancelled it. I’ve seen every episode at least four times, including the two episodes NBC never aired. Those episodes debuted on Hulu in June 2011. Sadly, the show isn’t available on DVD nor is it streaming anywhere. You can purchase all 13 episodes as digital downloads through Amazon Prime Video. Perfect Couples is the only show I’ve ever purchased as a digital download.

Breaking In ran for 20 episodes over the course of two short seasons. There are only seven episodes in the first season and, from what I recall, these were the best episodes. When the show returned for its second season, it had undergone a soft reboot and wasn’t as good. Fun fact: In 2010, Breaking In co-stars Bret Harrison and Odette Annable reunited in The Astronaut Wives Club on ABC as Gordon and Trudy Cooper.

ABC did this show no favors by airing episodes produced for the first season out of order during the second season. To be honest, I don’t remember being confused at the time but I’m sure it wasn’t easy as a viewer. When I rewatched the show on Netflix a number of years ago, I was finally able to see all 26 episodes in their intended order.

Welcome to Sweden was not a huge or even modest hit for NBC but it was hilarious. Wikipedia claims the episodes were edited for broadcast in the United States and I would love to see the original, unedited versions.

Undateable survived far longer than anyone expected it to and I for one am glad it did. I can still remember eagerly waiting to watch each new episode. The cast was amazing, the singing hilarious. The entire third season aired live and NBC made both the East Coast and West Coast versions of most episodes available online. Yes, I watched both versions. It was fun trying to spot any changes made after the East Coast broadcast.

Before The Grinder, I never would’ve imagined Rob Lowe and Fred Savage as brothers but I now wish they were in real life. Lowe plays an actor who decides to join his family’s law firm after his long-running, popular TV show (also called The Grinder) ends. The fact that he never went to law school only seems to matter to his brother, a real lawyer. Hilarity ensues. I was bitterly disappointed when FOX cancelled the show after a single season. The Grinder rests.

Frequency is the only drama to make the list because I don’t watch many dramas. But when I learned The CW was going to air a TV show based on the 2000 movie Frequency starring, I knew I was going to watch. I loved Frequency when I saw it in theaters (and again when I rewatched it before the TV show premiered) and I hoped a television version would be just as good. It was. So, of course it didn’t last long. The CW was nice enough to film and release an epilogue to give viewers closure.

Like several of the other sitcoms from the 2010s on this list, The Mick worked so well because of the cast. Maybe Kaitlin Olson could’ve carried the show by herself but luckily she didn’t have to because every member of the main cast fit their characters perfectly. This was another show I looked forward to every week. The final episode ended with a a shocking cliffhanger that will never be resolved.

I’m a huge fan of both doughnuts and television so of course I had to watch Superior Donuts. It took a few episodes for me to really get into the show but once I did, I was hooked. I will say it often felt like there were too many characters, especially during the first season.

To this day, I still occasionally yell out “Lady Driver!” but only around the one family member who also watched Trial and Error and understands the joke. I can’t decide which of the two short seasons is my favorite. They’re both fantastic and the show deserved a much longer run.

I’m still holding out hope Netflix will revive Great News. Stranger things have happened. The first season is probably my favorite but every episode is worth watching and rewatching.

Hit the comments with your thoughts on these shows and any favorite TV obscurities you may have from the 2010s.