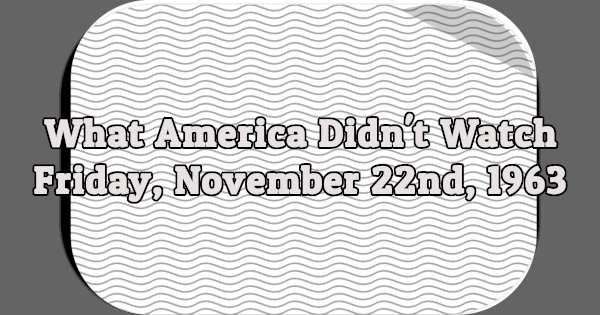 What We Didn’t Watch is a four-part special feature focusing on network prime-time programming pre-empted in November 1963 by coverage of President Kennedy’s assassination, its aftermath and his funeral. The networks aired news coverage and a few specials but no regular programming and no commercials. Most of the scheduled programs were aired at a later date. All times are Eastern.

When Walter Cronkite broke into As the World Turns on CBS at 1:40PM EST with an audio-only bulletin, neither ABC or NBC were offering network service. Affiliates were airing syndicated or local programs. By 2PM, all three networks were on the air with live coverage. Scheduled network programming for the remainder of the afternoon was tossed out.

CBS afternoon programming not seen that day included Password at 2PM, to Tell the Truth at 3PM and The Secret Storm at 4PM.

The regularly scheduled evening news were of course unnecessary, as news coverage was all that was on the networks.

Here’s a rundown of the prime time schedules for each network, with rescheduled airdates for:

[June 1st, 2016 Update: I originally said that “Body and the Barn” was postponed until July 3rd, 1964. However, Steve Z. pointed out in the comments that Stephen Bowie of The Classic TV History Blog has proven that the episode actually aired on November 29th, 1963.]

The interrupted episode of As the World Turns does exist in full, even if viewers on Friday, November 22nd, 1963 never got to see how it ended. The Paley Center for Media has a copy.