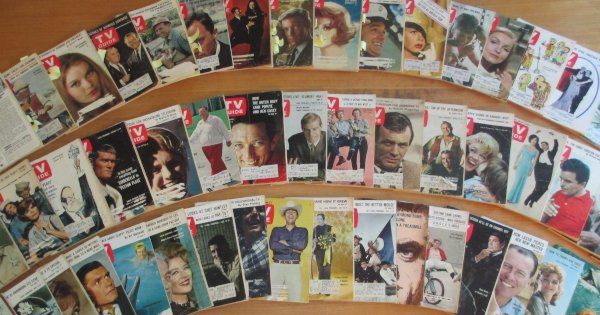 My A Year in TV Guide project has come to an end. It started last September with the 1964 Fall Preview issue and wrapped up yesterday with the 1965 Fall Preview issue. I admit to having mixed feelings. Part of me is relieved to be done, because reviewing an issue of TV Guide every week turned out to be far more work than I had anticipated. There were days where I dreaded having to pick up another issue. I was never really able to get ahead the way I had hoped. It was only a few weeks ago that I actually finished a review more than a few days before it was published.

But I’m also a little disappointed to see it end. A Year in TV Guide was an interesting and informative project for me. Not having lived through the 1964-1965 season, I wasn’t intimately familiar with it. Of course I knew about shows like The Man from U.N.C.L.E, Peyton Place, Bewitched, and The Addams Family that premiered during the fall of 1964. And I had written articles about several of the more obscure shows to premiere that fall: The Baileys of Balboa, My Living Doll, 90 Bristol Court, and Slattery’s People.

Still, at best I had a very broad understanding of how the season unfolded for the networks. Now, after reading these 52 issues, I feel like I’m much more knowledgeable about the 1964-1965 season. How could I not be, having spent the past year digging into it so deeply week after week?

I knew there would probably be an audience for A Year in TV Guide. Unfortunately, I’m not convinced it was a large audience. There was a core group who regularly left comments week after week. Most entries received between 5 and 8 comments with some getting as many as 15 while others received only three or four.

I had hoped that as the year went by I would see an increase as A Year in TV Guide gained a following, but that doesn’t seem to have happened. Nor did whatever popularity it did receive translate into an overall increase in visitors to Television Obscurities. That’s part of what made it so frustrating some weeks: here I was spending five hours dissecting TV Guide and not seeing a big response.

Still, I’m happy I spent the time that I did. The project was never just about trying to bring in new readers.

Do I Have a Favorite Issue?

As I started thinking about writing a wrap-up for A Year in TV Guide, I considered putting together a list of my Top 10 issues from the past year. But then I realized I don’t have a favorite issue let alone ten. To be honest, they’re all a blur in my mind. None stand out as particularly interesting nor especially disappointing.

I can’t say I have a favorite cover, either. If I had to pick one I’d probably say it was the June 26th, 1965 issue with Hullabaloo dancers on the cover if for no other reason than because Lada Edmound Jr. seems to be having so much fun. I’m also partial to the cover of the November 28th, 1964 issue, with its somewhat ridiculous photograph of Elizabeth Montgomery pulling the brim of her hat over her face. 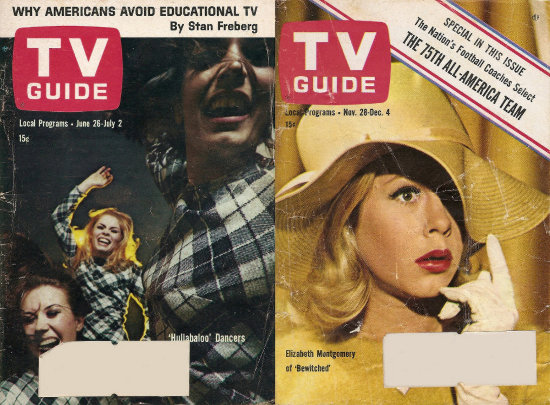 (For entirely different reasons, I have an attachment to the May 8th, 1965 issue with Bob Denver and Tina Louise on the cover. This was the issue I found at a relative’s house that led to the rediscovery of the 1964-1965 collection.)

I also don’t have a favorite article. The articles I enjoyed the most were those that went really explored the behind-the-scenes drama of a television show or examined something the networks were doing. The two-part article by Leslie Raddatz about movies with adult themes airing on television–which ran in the April 10th, 1965 and April 17th, 1965 issues–was fascinating, for example.

Many of the TV Guide profiles were of little interest to me while others were intriguing due to the fact that so many actors and actresses spoke without a filter. Tina Louise was very candid in her comments about Gilligan’s Island in the May 8th, 1965 issue. The June 12th, 1965 profile of Milburn Stone was an eye-opener as well. He made his feelings about his Gunsmoke co-stars very clear. I can’t imagine reading articles like these today when everyone is so guarded. Back in 1964-1965, though, it seems people felt more free to speak their minds.

Occasionally, there were articles that by today’s standards seem a little sexist, with a heavy emphasis on a woman’s appearance that was often unkind.

Although they drove me crazy at times, the listings in these 52 issues of TV Guide were arguably the most fascinating part of A Year in TV Guide. I admit, I would have preferred for all 52 issues to have come from the same edition. Not only would that have made things easier for me but it would have allowed for a year-long analysis of one area’s television programming.

The first 27 issues I reviewed were from the Western New England edition, so I got very used to the stations and programming. Having to then switch to the Eastern New England edition for several months was a challenge but nothing compared to trying to get a handle on listings for the Philadelphia, Iowa, North Texas, Southern Alabama, New York State, or Eastern Illinois editions.

I was fortunate that the first two issues I had to purchase were both from the Philadelphia edition. That made the listings in that second issue a little easier to get through. With the exception of those issues and the issue from the New York State edition, all of the other issues I had to buy were from areas in the Central Time Zone. I cannot tell you how much of an adjustment it was to keep track of that.

On the other hand, being able to present issues from different editions meant sampling local programming from various parts of the country.

A Year in TV Guide was made possible in large part due to a family member giving me a large collection of TV Guide issues from 1964 and 1965. I’ve written a little about this anonymous family member in the past. The reason I use the vague “family member” is because my family is very private and that’s as specific as I can be.

This family member is considerably older than I am. He says Fall 1964 is when he really started watching television as a kid. His family didn’t have a color set. He can’t remember today exactly why he decided to start collecting TV Guide in August 1964. The collection begins with the August 15th, 1964 issue and ends with the August 7th, 1965 issue. In between there are five issues missing.

I wanted A Year in TV Guide to start and end with Fall Preview issues, which ultimately meant purchasing nine issues at a cost of about $150 (the 1965 Fall Preview issue did not, as I had expected, cost the most). 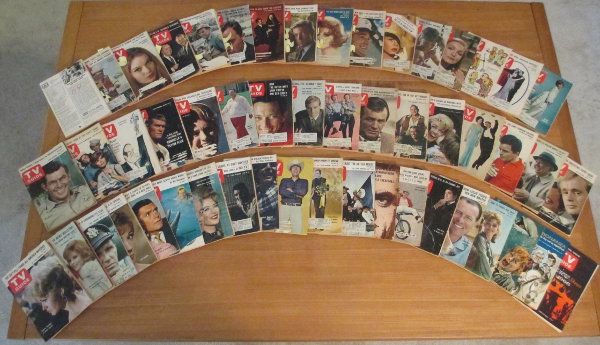 Some of the issues are in really rough shape. Two are missing covers and a few others have partially or completely detached covers. At least one has been stapled together.

I doubt I’ll ever tackle another project of this magnitude. I know several people left comments hoping I’d continue through the 1965-1966 season. Even if I had access to TV Guide for that period, I just don’t have it in me to keep going for another year. But I’m not finished with these issues quite yet. I’m working on an exhibit featuring local TV Guide advertisements from Connecticut that will cover August 1964 through August 1965, including many that I didn’t use in my weekly reviews.

I’m also working on several other projects. Next month, if all goes according to plan, look for a new article about ABC’s The Tammy Grimes Show. I’m also planning on reviving some blog features like Q & A, Unidentified Programs, Historical TV Schedules, and Historical TV Ratings (I still have to finish going through the 1955-1956 season, which I abandoned years ago). So whether you’re a long time reader or you found Television Obscurities because of A Year in TV Guide, stick around.

20 Replies to “Looking Back on A Year in TV Guide”