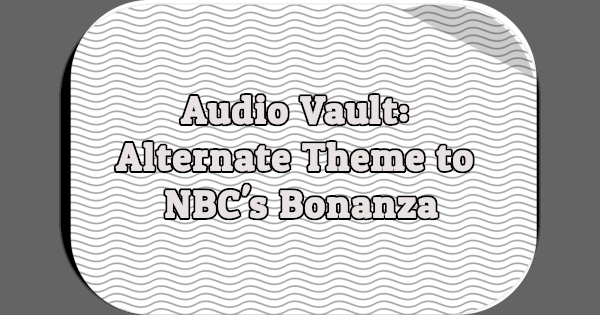 I can’t claim to be an expert on Bonanza, although I’ve certainly enjoyed a fair share of episodes over the years, so I don’t know all that much about this “alternate” version of the Bonanza theme song. I have found only one reference to it, in a September 1970 article in The Los Angeles Times:

A new Bonanza theme music will be introduced when the western returns for its 12th season on NBC, Sept. 13. David Rose wrote and arranged the new theme, which is soon to be available in a stereo album.

I apologize for the quality but it was originally recorded back in the early 1970s using a reel-to-reel player, transferred to a cassette tape decades later and then digitized. Perhaps a better version can be found on the stereo album mentioned above.

I doubt this has been seen on television since the end of the 1971-1972 season (Bonanza‘s 13th) when it was replaced by the original theme, according to Bonanza: Scenery of the Ponderosa. The show would run for only half of its 14th season before being canceled.

If anyone out there has additional information on this theme song, please let me know.