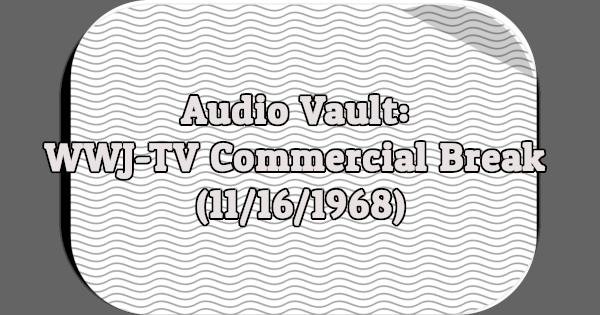 This particular commercial break aired on Saturday, November 16th, 1968. It followed the closing credits to an NBC special called “Jackie Benny’s Bag” (10-11PM ET) and before the local news on WWJ-TV at 11PM ET. Included are an NBC promotional spot, two commercials, and a local station ID for WWJ-TV.

[NBC Promo] “Part one of the spectacular story of El Cid, starring Charlton Heston and Sophia Loren, will be presented on NBC Monday Night at the Movies. See El Cid. Monday in color. At 9, 8 central time.”

[Winston Commercial] “‘It’s not how long you make it. It’s how you make it long.’ And here’s how: Super King Sized Winstons, with an extra measure of that famous Winston good taste. Try them today.”

[Miller Commercial] “This is the beer that proudly wears the name the Champagne of Bottled Beer. Simply because Miller makes it right. This is Miller High Life Beer.”