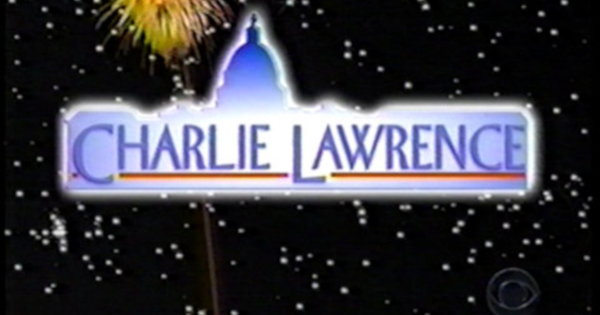 Let’s Remember is an opportunity for those who watched relatively recent short-lived TV shows, as well as those who didn’t, to share their thoughts and memories, to help ensure that these shows aren’t forgotten. This month’s column examines Charlie Lawrence (CBS, 2003).

From the official CBS website for Charlie Lawrence (via the Wayback Machine):

CHARLIE LAWRENCE is a new comedy series about a former TV star who has just been elected to his first term as a U.S. Congressman. Elected as a representative from New Mexico, Charlie (Nathan Lane) is a fish out of water in the political arena and in his new digs at the Watergate Complex. Charlie’s colorful, life-of-the-party personality contrasts sharply with his self-assured and overly pragmatic chief-of-staff Sarah Dolecek, played by multi-Emmy Award-winner Laurie Metcalf. His office manager, Suzette Michaels (Stephanie Faracy), is a besotted fan of Charlie’s, with an encyclopedic knowledge of his long-running series, “Do Unto Others,” in which he played an angel named “Guppy Sherman.” The befuddled young intern, Ryan Lemming (T.R. Knight), rounds out the office staff. And Charlie’s new neighbor and friend, Graydon Cord (Ted McGinley), is a member of the opposition party. So begins the second act of Charlie’s life, as he makes the transition from Hollywood to the House.

-CBS originally planned to air Charlie Lawrence as a mid-season replacement during the 2002-2003 season.

-In its two outings, Charlie Lawrence aired after repeats of Becker.

-After cancelling Charlie Lawrence, CBS filled the 8-9PM ET time slot with a mix of repeats, including CSI Miami, Becker, Without a Trace, and The CBS Sunday Movie.

Because the sitcom debuted during the summer, TV Guide never previewed Charlie Lawrence.

I recorded both episodes of Charlie Lawrence back in 2003. I dug out my VHS tape and watched them while working on this column. It’s not hard to see why CBS lost faith in the series. Judged solely on the two episodes that aired, the sitcom isn’t very good–or funny. Nathan Lane tries his best to elevate the material–as does Laurie Metcalfe–but it’s not enough.

Backstory and the need to introduce characters and set up future storylines bog down the series premiere. Charlie Lawrence is a former actor, best known for playing Guppy Sherman on the fictional Do Unto Others TV series (a comedic Touched by an Angel, apparently). Charlie is also openly gay. As New Mexico’s newest representative, he has his work cut out for him learning the ropes in Washington.

Charlie is a Democrat, although his political affiliation is never mentioned in the two episodes that aired. Obviously, the sitcom pokes fun at politics. Charlie botches his big swearing-in speech in the premiere. He worries about getting decent committee assignment in the second episode. But he does want to learn and do the best for his constituents. Summaries for the five unaired episodes can be found at TVGuide.com.

Both episodes struggle with the need to fit in not only references to Charlie’s past as an actor but also jokes about his sexuality.

Aside from Lane, the only member of the cast with a substantial role in either episode is Metcalfe. As Charlie’s chief of staff, she quickly but grudgingly realizes he’s more than just an actor pretending to be a politician. The remaining characters are little more than caricatures: Suzette Michaels is obsessed with Do Unto Others and shares too much personal information; Ryan Lemming is eager to please and easily overwhelmed; and Graydon Ford is a sexist but harmless politician.

Nowhere. Charlie Lawrence is not available on DVD, Blu-ray, digital download, or streaming.

Hit the comments with your thoughts and memories to ensure Charlie Lawrence doesn’t slip into obscurity.