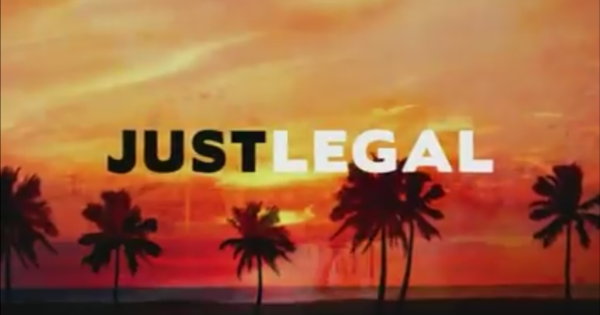 Let’s Remember is an opportunity for those who watched relatively recent short-lived TV shows, as well as those who didn’t, to share their thoughts and memories, to help ensure that these shows aren’t forgotten. This month’s column examines Just Legal (The WB, 2005; 2006).

I couldn’t find an archived version of The WB’s official website for Just Legal. Here’s an official synopsis from TV.com:

“Just Legal” is a fast-paced procedural drama with humor starring Jay Baruchel (“Undeclared,” “Million Dollar Baby”) and Don Johnson (“Miami Vice,” “Nash Bridges”) as lawyers who save their clients, and in the process, save themselves. David “Skip” Ross (Baruchel), 19, a brilliant legal prodigy, dreams of becoming a great trial lawyer. When he can’t land a job at a prestigious L.A. firm because he’s too young, Skip ends up working for Grant Cooper (Johnson). Once a great lawyer, now burnt-out by the realities of life, Cooper is barely scraping by in his beachfront law office. Together, Skip and Cooper become defenders of the accused and crusaders for the unjustly wronged. Their cases vary from stories ripped from today’s headlines to clever mysteries with procedural twists.

Skip’s middle-class parents, Deborah (Veanne Cox,”Erin Brockovich”) and Lenny Ross (Raphael Sbarge,”The Guardian”), and his under-achieving younger brother Tom (newcomer Michael Mitchell), are all extremely proud of Skip’s accomplishments, but are also concerned for his well-being, especially when his first case involves proving the innocence of a young woman named Paradise (Peyton List,”The Greatest Game Ever Played”) who has been falsely accused of a gang-related murder. Always the underdogs, forced to do the gritty work of finding clues and tracking down witnesses in the beautiful, but often dangerous world of Southern California, Cooper teaches Skip to be a lawyer and a man, while Skip renews Cooper’s faith in the law and himself.

–Just Legal was part of The WB’s final crop of new fall shows. The network merged with UPN to form The CW prior to the start of the 2006-2007 season.

There’s real chemistry between geek and geezer. But Just Legal might be more effective if it were closer in tone to a courtroom Scrubs than an awkward mix of earnest legal drama and broad-stroke character comedy. Still, it’s miles better than Fox’s similarly theme Head Cases.

I didn’t watch the three episodes of Just Legal aired at the start of the 2005-2006 season. But when The WB began burning off unaired episodes during the summer of 2006, I started watching. That means I watched a repeat of the pilot and five other episodes. However, I have no recollection of the show. I remember nothing about the characters or the episodes. The handful of clips available on YouTube don’t jog my memory. I think I do remember the brief opening credits sequence–or at least the theme (“Pump It” by The Black Eyed Peas).

Not mentioned in the official synopsis are the other two members of the main cast. Jaime Lee Kirchner played Dulcinea “Dee” Real, an ex-con who works as Grant Cooper’s receptionist to pay off her legal fees and satisfy her parole. Susan Ward played Skip’s law school classmate Kate Manat who works for the prestigious law firm that refused to hire him. Neither character appeared in in the pilot. There was some romantic tension between Skip and Kate but I don’t think the show survived long enough to explore it.

Reiley McClendon had a recurring role as Skip’s younger brother Tom. I don’t remember how much of an impact his character had.

Although I can’t recall anything about the show, it doesn’t seem like Just Legal fit in with The WB’s brand. The bulk of the network’s schedule during the 2005-2006 season consisted of family dramas (Gilmore Girls, Everwood), sitcoms (What I Like About You, Twins), and a handful of comic book/horror shows (Smallville, Supernatural). Just Legal was an odd mix of comedy and legal drama. I’m not surprised viewers didn’t tune in.

If not for the fact that The WB and UPN were merging, would The WB have burned off five of the six unaired episodes during the summer of 2006? The demise of The WB likely gave the few fans of the show the opportunity to watch most of the produced episodes.

Nowhere. Just Legal is not available on DVD or digital download nor is it streaming anywhere.

Hit the comments with your thoughts and memories to ensure Just Legal doesn’t slip into obscurity.