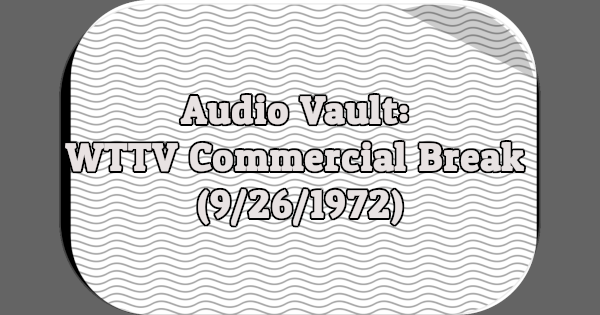 This particular commercial break aired following an episode of The Dick Van Dyke Show in off-network syndication on WTTV. I don’t know what time of day the episode aired, unfortunately. Included are three commercials and a local promotional spot for Banyon.

[Final Touch Fabric Softener Commercial] “‘You’re unbelievable.’ ‘What?’ ‘Got enough love in you for ten people.’ ‘Uh-huh.’ ‘No kidding. Two kids in diapers, you still find time to knit my sweaters. And how’d you get this diaper so white?’ ‘Final Touch Fabric Softener’ ‘I didn’t ask you how you got ’em soft. How’d you get ’em so white?’ ‘Final Touch. With bluing for extra whiteness.’ ‘She even finds a fabric softener that whitens, too. Hey, kid. Where’d you find a mom like that?'”

[Tidy-Ups Commercial] “Tidy-Ups are new small blessings for you and your baby. These pre-moistened washcloths take the trouble out of cleaning up baby. Each Tidy Up pre-moistened washcloth comes in a little foil packet. Tidy Up folds up big and strong and soft and gentle. Cleans up baby in a jiffy. Guards against [diaper?] irritation. New disposable Tidy-Ups from Curity. Curity always has something better for your baby.”

The promotional spot for Banyon is a bit of a mystery. Banyon debuted on NBC in September 1972, just a few weeks before this recording was made. A detective drama, it aired Fridays from 10-11PM ET. So what was it doing airing Sunday at 5PM on an independent station? Presumably, the NBC affiliate in Indianapolis–WRTV–pre-empted Banyon and the network turned to WTTV.