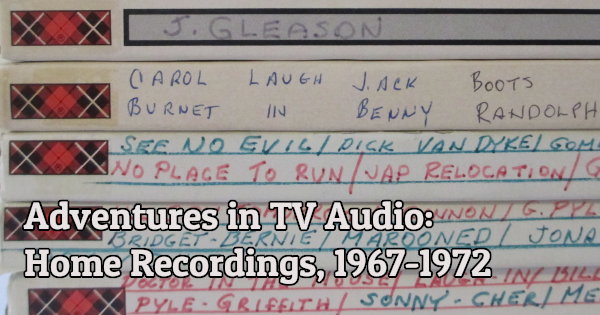 Two weeks ago, I wrote about a reel-to-reel audio tape containing over 100 TV theme songs recorded by a relative of mine in the late 1960s and early 1970s. Last week, I examined reel-to-reel tapes used in the production of The New People (ABC, 1969-1970). Today’s installment of Adventures in TV Audio explores a collection of reel-to-reel tapes used to record network and local TV programs between 1967 to 1972.

I acquired this collection five years ago. The seller told me the recordings were made by a blind man. The man apparently enjoyed listening to television programs and also liked to record them. I didn’t get the whole collection. The seller split it up and sold off various tapes piecemeal. I managed to buy nine reel-to-reel tapes but only eight contain TV audio.

These are 7″ reels of Scotch 203 magnetic recording tape. Additional tape has been spliced onto at least three of the reels. There is nothing written on the reels themselves. The man who did the recording wrote on the box spines. He also wrote on the back of five of the boxes. TV Guide clippings are glued to the backs of the last three boxes, some with handwritten dates.

The recordings were made between 1967 and 1972. The earliest recording is the September 23rd, 1967 episode of The Jackie Gleason Show on CBS. The latest recording is a December 27th, 1972 repeat of The Sonny and Cher Comedy Hour, also on CBS. Most of the recordings are network shows but there are some syndicated reruns and even a few local news shows.

TV from Michigan and Indiana

Exactly where these recordings were made is a bit of a mystery. The programs on the first four tapes aired either on WJBK-TV (CBS, Channel 2) or WWJ-TV (NBC, Channel 4), two stations located in Detroit, Michigan. There’s also a radio program from Detroit station WJR on one of the tapes. All of these recordings date from between 1967 and 1969.

None of the recordings on the fifth tape contain station identifications. These date from 1971.

As far as I can tell, all of programs on the final three tapes aired on TV stations in Indianapolis, Indiana. The stations include WTTV (Independent, Channel 4), WFBM-TV/WRTV (NBC, Channel 6), WISH-TV (CBS, Channel 8), and WLWI (ABC, Channel 13).

This ID and all of the recordings on the last three tapes are from 1972.

Altogether, there are almost 50 partial or complete television programs on these reels. Here’s a list:

The man who made the recordings clearly loved The Jackie Gleason Show. He recorded 11 different episodes of the variety series between September 1967 and June 1969. There are six episodes of Gomer Pyle, U.S.M.C. (syndicated repeats) and three episodes of Rowan & Martin’s Laugh-In.

Also, there are five different movies on the tapes:

Almost all of the programs are complete. The only exceptions are the news broadcasts.

Personally, I’m most interested in promotional spots. Luckily, there are a good number of promos for network and local programs. When I purchased the tapes, I hoped to find audio from CBS network promotional spots for M*A*S*H. Sadly, there wasn’t any. However, I did find audio from standalone network promos for All in the Family, Kraft Music Hall, The NBC Wednesday Mystery Movie, SEARCH, NBC Monday Night at the Movies, and The Sonny and Cher Comedy Hour.

Here’s audio from a dual promotional spot for the premiere of Madigan on The NBC Mystery Movie and an episode of SEARCH:

Here’s a look at some of the commercials heard on these tapes:

It’s difficult with just the audio to determine whether commercials are national or local. There are some exceptions, like the First Federal Savings of Indianapolis commercial or the O’Brien Chrysler Plymouth commercial.

Here’s audio from a June 1969 commercial for Suprema Spaghetti Sauce:

This commercial aired on WJBK-TV (Channel 2) in Detroit during a repeat episode of The Jackie Gleason Show on CBS.

Finally, it’s time to talk about the possibility that these reel-to-reel tapes may contain audio from missing or lost television programs. Was it something I thought about when I decided to buy the reel? Honestly, I can’t recall but I’m sure it was in the back of my mind.

Because of the time period involved and the content on the tapes, the odds that any of these programs are lost is almost nonexistent. Network comedies, dramas, and variety shows from the late 1960s and early 1970s are not generally an area of concern. Now, if these tapes contained audio from daytime game shows or soap operas, that would be a different story.

The Vanderbilt Television News Archive began recording network nightly news in August 1968. The two incomplete nightly news broadcasts (CBS and NBC) on these reels can be found at Vanderbilt. If NBC doesn’t have NBC Reports (“Guilty by Reason of Race”) in its archives, The Paley Center for Media does. There are two incomplete WISH-TV local news broadcasts on these tapes, both from September 26th, 1972. If WISH-TV doesn’t have copies of those broadcasts, this audio may be unique.

What about audio from commercials? There are numerous collections of television commercials in existence, not to mention YouTube. Finding definitive proof that an individual commercial no longer survives is going to be difficult. That said, it’s not entirely out of the question that audio from some of the local commercials on the tapes may be unique.

If anything on these reels is otherwise lost, it may well be the promotional voiceovers heard over the ending credits of various programs.

Truth be told, I bought these tapes primarily out of sheer curiosity. I started digitizing the audio reels in 2013 but took a lengthy break and didn’t finish until late last year. I now have more than 37 hours of television audio. Have I listened to all of it? Of course not. What I have done is find as many commercial breaks as possible plus all of the closing credits.

There’s not much I can do with this audio. I may pick a few of the commercials and try to confirm whether they still exist. Otherwise, my only goal is to share bits and pieces here at Television Obscurities. So that’s what I’m going to do.

Starting next week, I’ll be posting selections from my collection of TV audio every Wednesday. My initial set of Audio Vault posts will run for 13 weeks and include closing credits, promotional spots, and more. Be sure to check back every Wednesday.