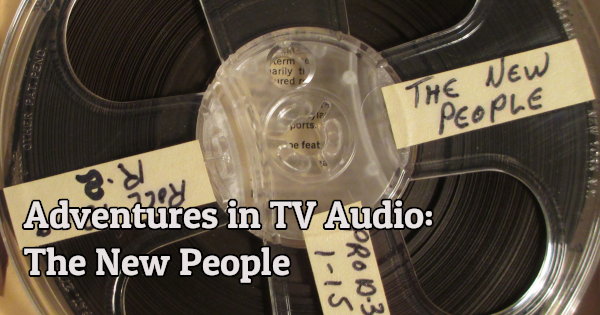 Last week, I wrote about a reel-to-reel audio tape containing over 100 TV theme songs recorded by a relative of mine in the late 1960s and early 1970s. Today’s installment of Adventures in TV Audio examines a half-dozen reel-to-reel tapes containing production audio from ABC’s The New People, which ran from September 1969 to January 1970. As I’ve mentioned time and time again over the years, The New People is my very favorite obscure TV show. You can find my article about the show here.

I acquired these six reel-to-reel tapes over a decade ago. Unfortunately, I don’t remember exactly where they came from. For some reason, I want to say the person who sold them to me found them in a shed alongside audio tapes from a number of other TV shows. Presumably, whoever put the tapes in the shed had some connection to the television industry and may have actually worked on The New People.

To be clear, these tapes do not contain audio recordings of episodes of The New People as broadcast by ABC. These are production tapes, although I don’t know exactly how the audio fits into the production/post-production process. The tapes are in their original boxes. Inside the boxes are documents–either production mixer’s reports, sound reports, or both–from a company called Glen Glenn Sound, . If you watched TV in the 1960s or 1970s and paid close attention to closing credits, you probably recognize the name Glen Glenn.

I checked and the closing credits to the series premiere of The New People do include a “Recorded by” credit for Glen Glenn Sound.

One of the tapes contains audio from the pilot episode, which aired September 22nd, 1969. Four of the other tapes contain audio from an episode I believe I’ve identified. That leaves one tape unaccounted for. I haven’t been able to figure out which episode the audio is from.

The reel dated 1/15/1969 (prod. #31011-001) contains audio from the pilot episode of The New People. I know this for several reasons. The date, for one thing. Also, I recognized the name Hannichek when I listened to the audio. Richard Kiley guest starred in the pilot episode as a character named Hannichek. Finally, the production mixer’s report found in the box has the word “pilot” written on it. That’s pretty solid proof.

Victor B. Appel is the credited sound engineer for The New People. Among the four crew members listed on the sound report sheet is someone with the last name Appel. The production mixer’s report is more specific, referring to Vic Appel.

The tape contains audio recorded at 7.5 inches per second. The audio is from eight different scenes, all filmed at the Catalina Airport. There are multiple takes for some of these scenes. Not all of them include dialogue. Those that do feature conversations between Hannichek and another character played by Parley Baer. Although not identified in the audio, Baer played a man named John Pilgrim.

Here’s the audio from scene 8A, scene 9, and three takes of scene 9A:

(Full disclosure: After digitizing the audio, I used software to clean it up a little bit and remove a constant buzzing sound.)

The only episode of The New People I’ve been able to get my hands on is the pilot episode. When I first listened to this audio, I discovered that none of the dialogue on the tape is actually in the pilot episode. Initially, I assumed it was cut during editing. That was before the UCLA Film & Television Archive revealed it has a copy of an alternate, hour-long version of The New People pilot.

The Sound of Dune Buggies?

Four of the tapes are dated 8/4/1969 (prod. #31011-004) and contain audio recorded at Zuma Beach in Malibu, CA. The company listed on the documents in these boxes is Howard Anderson. The closing credits to the pilot episode feature a “Photographic Effects” credit for the Howard A. Anderson Co.

Two of the tapes have nothing but wild tracks on them. A wild track is audio recorded without a camera running. Most of this audio is either of the ocean surf or the sound of an engine motor. Spread across the other two tapes are an astounding 13 different takes of scene 104D. In this scene, two characters are talking about racing. I think the characters are Bob Lee (played by Zooey Hall) and Stanley Gabriel (played by Dennis Olivieri).

(Full disclosure: These tapes contain audio recorded at 15 inches per second, which my reel-to-reel player cannot play back. When I digitized the audio, I played it at 7.5 inches per second and then used software to alter the speed.)

The engine motor noise and the mention of racing makes me think this audio is from an episode called “The Tin God,” which aired October 6th, 1969. In it, Bob and Stanley race dune buggies and Bob accidentally drives into and injures Wendy (played by Donna Baccala).

The remaining tape is dated 10/4/1969 (prod. #31011-016) and contains audio from one take of scene 15A, recorded at Zuma Beach. In this scene, two characters–one male, one female–are yelling for help. I don’t know who these characters are or which episode this is from.

(Full disclose: This audio was also originally recorded at 15 feet per second. I had to adjust it using software after digitizing it.)

Prior to the yelling, an unidentified member of the audio crew leaves a note to for whoever transfers the audio later on.

To be honest, these six audio tapes are curiosities more than anything else. The tape with audio from the pilot episode is the most notable. There’s a small chance it contains dialogue not found in either the original hour-long version of the pilot or the 45-minute version ABC aired. If that’s the case, could the audio on this reel-to-reel tape be the only surviving proof of “lost” dialogue from The New People? I hesitate to even suggest the possibility.

Still, there’s a good chance these tapes are unique. Plus, they tell a tiny bit of the story of The New People, and that’s enough for me.

Be sure to check back next week for another installment of Adventures in TV Audio. I’ll be exploring a collection of more than 50 network, syndicated, and local TV programs recorded on reel-to-reel tape between 1967 and 1972.

2 Replies to “Adventures in TV Audio: The New People”