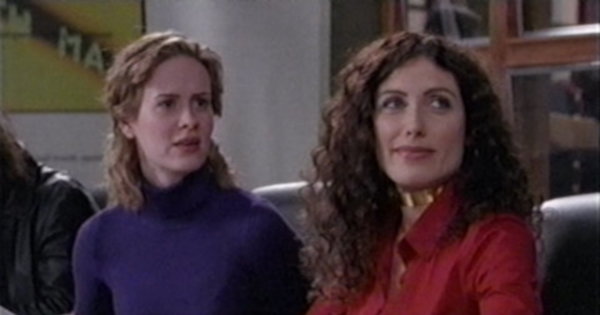 Let’s Remember is an opportunity for those who watched relatively recent short-lived TV shows, as well as those who didn’t, to share their thoughts and memories, to help ensure that these shows aren’t forgotten. This month’s column examines Leap of Faith (NBC, 2002).

From NBC’s website (via the Internet Archive’s Wayback Machine):

From Jenny Bicks, Emmy and Golden Globe Award-winning writer and producer of “Sex and the City,” comes this new half-hour single-camera comedy about the relationships between a close circle of friends in their 30s. At the center is Faith Wardwell (Sarah Paulson, “Jack and Jill,” “What Women Want”), a spirited young woman who calls off her engagement to a “good on paper” guy and takes a leap of faith back into the single life to discover what it’s like when you stop doing what you should do, and start doing what makes you happy.

After a fling with an attractive actor (Brad Rowe, “Wasteland”) prompts her to cancel her nuptials, Faith finds herself back in the company of her outspoken circle of friends who provide varied perspectives on life. There’s Patty (Lisa Edelstein, “Felicity,” NBC’s “The West Wing”), Faith’s free-spirited single friend and co-worker who’s always looking for Mr. Right Now; Cynthia (Regina King, “Jerry Maguire”), Faith’s no-nonsense married neighbor who likes to speak her mind on all issues, relevant to her or not; and Andy (Ken Marino, “Men Behaving Badly”), Faith’s fun-loving best friend from college who works as a reporter at Rolling Stone.

“Leap of Faith” is created and executive produced by Jenny Bicks and is an NBC Studios production.

–Leap of Faith was NBC’s second attempt to fill the post-Friends time slot during the 2001-2002 season. The network’s first effort, Inside Schwartz starring Breckin Meyer, ran for 9 episodes from September 2001 to January 2002. Ratings were good but not good enough, so NBC yanked it. Leap of Faith performed better but NBC still wasn’t happy. Incredibly, both shows ended the season in the Top 15: Leap of Faith ranked 12th and Inside Scwhartz ranked 15th.

-NBC replaced Leap of Faith with repeats of Friends. The repeats ranked 8th for the season.

-Curiously, I can’t find any source that includes last names for most of the characters.

As a mid-season replacement, Leap of Faith wasn’t featured in a TV Guide Fall Preview issue.

The Leap of Faith opening credits weren’t available on YouTube, so I uploaded them myself:

I have no memory of watching Leap of Faith back in 2002. Nor can I now remember why I decided to tape the premiere episode. I held onto the VHS tape and dug it out while working on this column. Just a few minutes into the episode it became obvious why Leap of Faith failed.

Clearly, whatever it is that worked for an edgy comedy on HBO Sex and the City didn’t work for NBC.

Had Leap of Faith been successful, it’s likely Lisa Edelstein wouldn’t have been available in 2004 to join the cast of FOX’s House.

Nowhere. The show isn’t out on DVD nor is it streaming anywhere. Quite a few clips can be found YouTube if you’re really interested.

Hit the comments with your thoughts and memories to ensure that Leap of Faith isn’t forgotten forever.