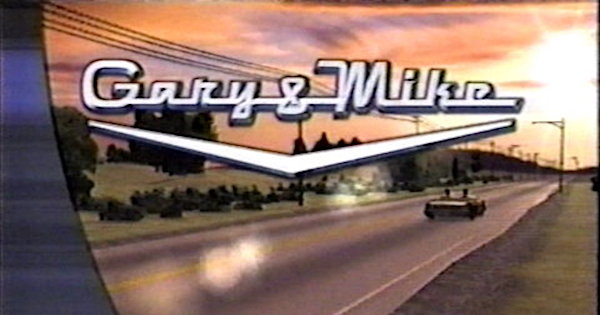 Let’s Remember is an opportunity for those who watched relatively recent short-lived TV shows, as well as those who didn’t, to share their thoughts and memories, to help ensure that these shows aren’t forgotten. This month’s column examines Gary & Mike (UPN, 2001).

I have been unable to find an official UPN synopsis for Gary & Mike. The series follows the misadventures of two twenty-somethings as they travel across the country. Mike is a slacker obsessed with girls. Gary is his nerdy, responsible friend.

-UPN gave the series a special preview from 9:30-10PM ET on Thursday, January 11th, 2001 following an episode of WWF Smackdown. It moved to its regular time slot the following night: Fridays at 8PM ET. It aired prior to repeats of MTV’s Celebrity Deathmatch, another stop-motion animated TV series.

As a mid-season replacement, Gary & Mike did not receive the Fall Preview treatment from TV Guide magazine.

I couldn’t find a video of just the opening credits, so here’s the first part of the series premiere:

I don’t have any memories of watching Gary & Mike. I’m not a fan eager for the opportunity to rewatch the series. In fact, I’ve never seen a single episode. Yet for more than 15 years, I’ve hated it with a passion. Why? Because it replaced a show I loved: the short-lived Freedom. I still remember seeing promotional spots for the series premiere of Gary & Mike while watching the last few episodes of Freedom.

Specifically, I remember a scene in which one of the characters is in a dirty bathroom stall. He hears a voice and looks down to find a single eyeball peering at him. Then the voice says, “Whatcha doing? Poopin’?” It infuriated me that UPN was going to replace Freedom with a series with such crude humor.

Imagine my surprise when the reviews I found were not completely negative. In fact, several of them are quite positive. That’s why I’m particularly interested in reading what others have to say about the series. Did it rise above the bathroom humor featured in the promos I remember? Did I miss out on an enjoyable, funny show because I was too angry at UPN to give it a chance?

Nowhere. Gary & Mike has never been officially released on DVD. Nor is it streaming anywhere, although most episodes can be found on YouTube.

Hit the comments with your thoughts and memories to ensure Gary & Mike doesn’t slip into total obscurity.