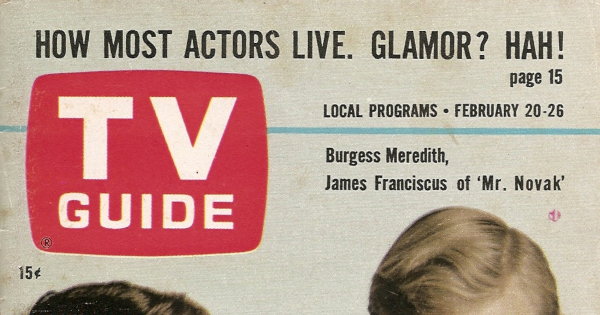 On the Cover: Burgess Meredith and James Franciscus of Mr. Novak (photograph by Larry Schiller).

There are a good mix of articles in this week’s issue. “No ‘Loxes’ Need Apply” is a three-page look at how Goodson-Todman Productions selects celebrity panelists for its various game shows like What’s My Line and To Tell the Truth, among others. It’s not easy. Every week potential players are packed around a conference table and rapidly run through various games while producers watch and take notes. Celebrities must meet three criteria: 1) have lively, attractive personalities; 2) be able to ad-lib entertainingly; and 3) be able to play at least one of the Goodson-Todman game shows well. 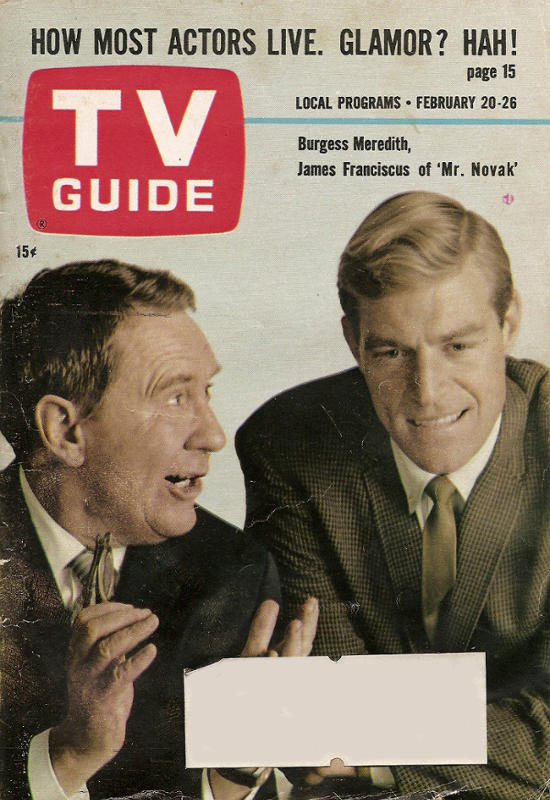 The selection process is so rigorous, in fact, that getting just one good person out of 20 is considered good. As Mark Goodson explains, there are a lot of loxes, aka deadheads. Barbara Feldon and Kaye Ballard are given as two examples of non-loxes. Finding someone like that makes the producers feel great. Of course, exceptions are made for really big celebrities. If someone like Elizabeth Taylor wants to be on What’s My Line, the article notes, she’ll be invited no matter what.

Other examples of moonlighting actors in the article include Billy Halop, who works at Ted’s Grill in Malibu; Leon Lontoc, who is a barber and maitre’d; Michael Wilding, who is a theatrical agent; Lola Albright, who owns restaurants; Vincent Price, who buys paintings for Sears; and Theodore Bikel, who owns part of a recording company. Hal Gerard went back to dentistry after years of acting, and makes more than $100,000 a year, so he can take acting jobs when it suits him. Even Jim Garner and Fred Astaire have side jobs: Garner is an officer of the Silver Lake National Bank in Los Angeles and Astaire owns a chain of dancing schools.

Geraldine Brooks is the actress being found in “To Find an Actress,” another TV Guide biographical sketch. Brooks is married to Budd Schulberg, author of the novel What Makes Sammy Run? who also wrote the screenplay to On the Waterfront. He penned her official biography as well. She spent her childhood talking to inanimate objects which came in handy when she took acting classes. “When they told me to be a tree and to imagine the sap running through me,” she explains, “I could do it because that is what I had been doing all my life.” Her family owns the Brooks Costume Company, which is where she got her stage name. She spent time in Italy making movies after failing to hit it big in Hollywood and is now happily married and content to take occasional film and TV roles. She would, however, like the chance to do comedy.

The most interesting article in this issue, at least for someone like me eager for behind-the-scenes information, is “Adding Curry to the Curriculum” by Dwight Whitney. It’s an in-depth look at how Burgess Meredith came to replace Dean Jagger on NBC’s Mr. Novak. This is the sort of article I love because it provides a lot of detail.

According to Whitney, the whole thing came down to a matter of ifs. If Jagger hadn’t started having concerns about the direction of the series and if he hadn’t put off an operation to treat a serious ulcer and if his doctor hadn’t issued an ultimatum on December 4th, 1964, his character Albert Vane would still be principal of Jefferson High School.

Likewise, if Meredith’s play I Was Dancing hadn’t closed a week before Jagger’s departure and if he hadn’t been in Hollywood right when Jagger left and if he hadn’t passed on a role on Wagon Train in order to do a two-part guest appearance on Mr. Novak, his character Martin Woodridge wouldn’t have become a series regular.

The two-part “Faculty Follies” was being filmed when Jagger announced he was leaving Mr. Novak (the script was actually written for another actor, Donald Pleasence, but he wasn’t available so Meredith was signed). Producer Leonard Freeman immediately thought of replacing Jagger with Meredith and approached executive producer E. Jack Neuman and MGM executive Alan Courtney. Both assumed Meredith would say no. After taking a weekend to think about it he surprised them all by agreeing.

An episode called “The Crowd Pleaser” in which Principal Vane ran for superintendent but lost had been filmed earlier in the season but shelved due to Freeman worrying viewers were sick of politics. The end was reworked, with Jagger performing via telephone, so that Vane won the election and appointed Woodridge the new principal. The episode was retitled “Mountains to Climb” and scheduled to air February 23rd.

Presumably, somewhere there exists the alternate version of the episode with the original ending. If Mr. Novak is ever released on DVD perhaps it will be included.

The “As We See It” editorial is all about Profiles in Courage this week and the news that NBC does not plan on repeating the critically acclaimed series during the summer. The final episode will air May 9th. However, the series will be syndicated. TV Guide wonders if it failed in the ratings because the second half-hour aired opposite Lassie on CBS, forcing NBC to find a replacement. “This is unfortunate for the roughly 12 million viewer who enjoy the program,” said TV Guide, “but is perfectly understandable. NBC is a business. And it has, at least made an effort.” The editorial ends by calling Profiles in Courage “a victim of the peculiar American commercial system that carefully excludes any but the most frivolous of programs (with mighty few exceptions) from winning a regular position on nighttime schedules.”

There is once again no review this week. Cleveland Amory is still judging the International Television Festival in Monaco. According to the January 30th issue, Amory’s reviews will return in March.

Rounding out the national section this week is a picture feature examining the ghastly decor of The Addams Family house. It’s not a great picture feature because there are only two pictures and an awful lot of text from Leslie Raddatz. There is also the regular TV crossword puzzle.

The letters page was an interesting mix this week. Richard Rodgers wrote in to apologize for leaving conductor John Green out of his essay about “Cinderella” that was published in the January 23rd issue. There were two letters from readers angry that Jackie Gleason had called Plato “one of the stupidest men in the world” in a February 6th article. And two readers wrote in to praise Marya Mannes and her theoretical television network, which she wrote about in the February 6th issue. Then there was this lengthy letter:

To the Female start of Broadside: In the Jan. 9 article “Kathy Nolan of Broadside” you are quoted as saying, “Broadside involves serious actors and actresses doing comedy. McHale is a bunch of stand-up comics. We’re doing a job. They’re a bunch of goof-ups.” If you were quoted correctly,and inasmuch as we have all been subjects of TV Guide pieces, we have o reason to believe that you were not, may we say the following: Mr. Joe Flynn studied speech and drama at the University of Notre Dame and has a degree in the same field from the University of Southern California. Mr. Tim Conway has the same degree from Bowling Green State University. Mr. Ernest Borgnine has an Oscar signifying him to be the most outstanding dramatic actor of the year. Be that as it may, no matter what our academic or professional qualifications might be, we feel that inasmuch as we blazed a path in a field in which you are a pale copy, we are not deserving of your gratuitous insult.
McHale’s Navy
Universal City, Cal.

Wow. I must not have read the January 9th article about Kathy Nolan as closely as the cast of McHale’s Navy.

The weekend was filled with sports, as always, with bowling, track and field, golf, horse racing, roller derby, basketball, and skating. NBC aired the third installment of Big Three Golf from 5-6PM on Saturday, February 20th while ABC broadcast Shell’s World of Golf from 4-5PM on Sunday, February 21st. Later that night, NBC rebroadcast “Return to Oz,” an hour-long color special that first aired on February 9th, 1964. General Electric took out a special three-page advertisement in the national section as well as an additional page in the listings section promoting its products and free gifts available in select stores. CBS aired its new version of “Rogers and Hammerstein’s Cinderella” on Monday, February 22nd from 8:30-10PM. Lesley Ann Warren starred as Cinderella with Stuart Damon as the prince, Ginger Rogers as the queen, Walter Pidgeon as the king, and Celeste Holm as the fairy godmother.

On Tuesday, February 23rd from 10-11PM, NBC aired a documentary called “The Journals of Lewis and Clark” produced and directed by Ted Yates. Lorne Greene narrated. ABC broadcast the first installment of Saga of Western Man for the season (“I, Leonardo da Vinci”) during the same time slot. On Friday, February 26th from 7:30-8:30PM, NBC repeated “The Restless Sea,” part of the Bell Science Series. The color special first aired on January 24th, 1964. Here’s a full page advertisement: 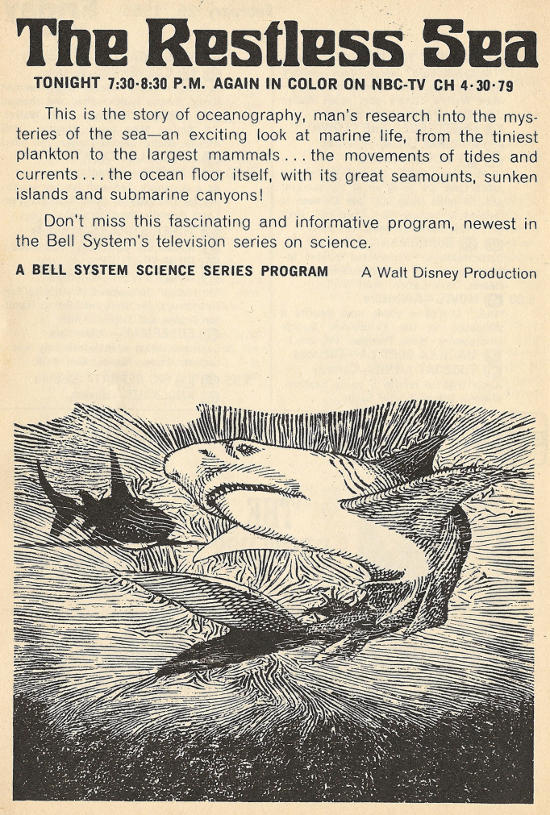 And on Sunday, February 21st WTIC-TV (Channel 3) aired From the College Campus from 11:30AM-12PM, this time from Wesleyan University in Middletown, CT. WHDH-TV (Channel 5) aired another public affairs report from 12-1PM. The topic was “Where is Peaceable Lane?” about how Greater Boston was combating discriminatory housing practices. Both WBZ-TV and WNHC-TV aired live coverage of the National Indoor Singles Tennis Championship from 2-3:30PM. Jack Kramer and Jim McArthur called the action. WNAC-TV (Channel 7) premiered Repertory Theatre, a syndicated drama series hosted by Walter Kerr, at 2:30PM.

Finally, here’s an advertisement for news on WHYN-TV (Channel 40) out of Springfield, MA:

Friday, February 26th, 1965
“An Apple a Day.” Ways to safeguard the health of members of the local community are discussed.