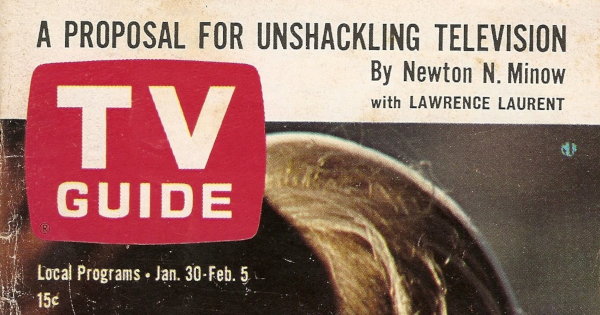 On the Cover: Inger Stevens in Sweden (photograph by Hamilton Millard).

This issue contains five articles of various lengths. One is long and dull, another is unusual but interesting, and the other three are about people I’ve never heard. The long and dull article is titled “‘Is There No Way Out of This Madness?'” and is a five-page essay by former FCC Chairman Newton N. Minow (with Lawrence Laurent) laying out his ideas for fixing television. Basically, Minow feels that the “equal-time” law spelled out in Section 315 of the Communications Act of 1934 — and amended in 1959 — is ruining television and should be thrown out. He goes over the history of equal time and its influence on the 1964 political campaign and suggests a two-prong fix:

First, Section 315 should be completely repealed. Broadcasters, both TV and radio, should be left to cover politics as they see fit. In Minow’s opinion, they will do a perfectly fine job on their own because it is in their best interest to be fair and balanced.

Second, all broadcasters will be obligated to give four hours of free airtime during prime time to each of the two major political parties in the month leading up to Election Day. Minority parties would also be given free time based either on the number or percentage of votes received in the last election, or petitions during the current election. The free air time would, Minow hopes, limit the length of campaigns. Majority parties could still buy as much time as broadcasters were willing to sell in addition to the guaranteed four hours in November.

[I don’t understand why Minow thought this would help. Without having to worry about equal time complaints, stations and networks could have sold all the time they wanted to the major parties, ignoring without fear of consequence minority parties or candidates. Minow’s dream was never realized: Section 315 is still in effect today and still confusing.] 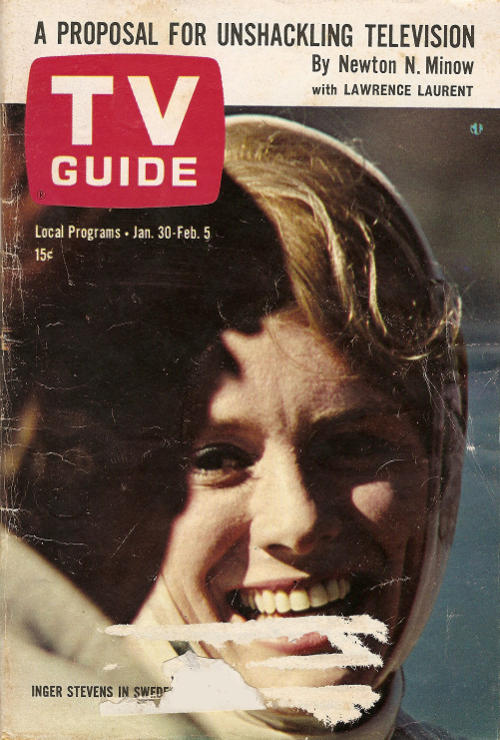 “Dear Inger” is the unusual but interesting article. It’s unusual because it isn’t really an article or an essay but a series of letters between magazine writer Robert de Roos and actress Inger Stevens. The letters were written while Stevens — star of ABC’s sitcom The Farmer’s Daughter — was in her native Sweden filming a television special for ABC titled, not surprisingly, “Inger Stevens in Sweden.” The letters from de Roos are short and usually tongue-in-cheek. Stevens, however, has lots of interesting things to say about her return to Sweden. The hours were long, for one thing, and director Don Taylor had trouble communicating with the crew because none of them spoke English. Stevens herself apparently reverted to speaking mostly Swedish.

There were other problems, too. She was getting her hair done before heading out to the countryside when someone discovered that there was no hair drier. The hotel manager had to break into the hotel’s beauty shop to get a drier, which Stevens took with her for three days. Later, while filming with actor Max von Sydow, someone forgot to load film in a camera and Stevens had to beg Sydow to return after dinner for several more hours worth of filming. He was a good sport about it and Stevens raved about him, which de Roos didn’t like. I think I’d like to see “Inger Stevens in Sweden” because I don’t know all that much about the country and all I’ve ever seen of Stevens is one of her two appearances on The Twilight Zone (“The Hitch-Hiker”) and she was incredible in that.

“The Man with the $175,000 Smile” is a profile of Jack Lescoulie, best known for announcing NBC’s Today for 12 of its 13 years. I’ve never seen a single episode of Today, let alone any from the 1950s or 1960s, so I had no idea who he was before reading the article. Apparently there were a lot of jokes about his smile, he was friends with Jackie Gleason, and at one point he was making $175,000 a year, mostly from TV commercials.

“And Away She Went” is a very brief (just one page) look at actress Elizabeth Allen, who got her start as an “Away-We-Go” girl on The Jackie Gleason Show. Like Lescoulie, I’d never heard of her. After looking through her IMDb profile I think the only thing I’ve seen her in is an episode of The Twilight Zone (“The After Hours”).

“The Second Banana Who Knows His Place” is a two-page essay about actor Corbett Monica and how he managed to survive on The Joey Bishop Show for so long after two other actors (Joe Flynn and Guy Marks) came and went playing opposite Bishop. You guessed it, I’d never heard of Corbett Monica and I’m not familiar at all with The Joey Bishop Show. According to the article, Monica was friends with Bishop but more importantly didn’t consider himself second fiddle and was comfortable with the way things were, so there was no jealousy nor any bitterness.

The “As We See It” editorial this week is another bizarre one. It discusses the Television Information Office, said to be “broadcasters’ propaganda agency” that is charged with convincing viewers that TV is better than it really is. It usually brags about Sunday afternoon shows, special events, and the occasional documentary. It would make more sense, in the opinion of TV Guide, for the Television Information Office to declare all television worthy of watching. But that, perhaps, wouldn’t be very honest.

Cleveland Amory’s review of Candid Camera is filled with high praise. “It is fine art,” he writes, “for it not only holds the mirror up to nature in general but up to our natures in particular and in the end literally gives us Robert Burns’ gift to see ourselves as others see us.” According to Amory Candid Camera is “the television medium used to its fullest advantage” and all involved are deserving of credit. He is particularly pleased that the celebrities on the show are never the focus. Still, he raises a few notes of concern: that Allen Funt is showing too many of his “camera vignettes;” that other new innovations on the show like repeating jokes aren’t very interesting; and that Funt enjoys children’s dialog too much.

There are two picture features in this issue. One showcased the various miniatures used in the production of Voyage to the Bottom of the Sea, including three different versions of the Seaview (one four feet long, another eight feet long, and the largest 18 feet long). The other examined women’s golf hats worn at various matches around the world during filming of Shell’s Wonderful World of Golf. One of the hats pictured was worn by Princess Grace of Monaco. There is also the regular TV crossword puzzle.

There were four news reports in the “For the Record” column in the listings section this week:

The letters page was all over the place this week. There were two letters about The Man from U.N.C.L.E. (one positive, one negative), one praising Bob Hope’s Christmas special, and one suggesting Julie Newmar learn a thing or two from Bob Cummings. There were also three responding to Isaac Asimov’s tongue-in-cheek article about the robot on My Living Doll from the January 16th issue:

Re Robot AF-709 [“Why I Wouldn’t Have Done It This Way,” Jan. 16] Isaac Asimov, you can call my psychotic, but I’m glad they did it the way you wouldn’t have done it.
John Schiess
Los Angeles

I do agree with Isaac on one point. Dr. McDonald should have permitted her to take off her sheet so we could see if she has a toggle switch on her tummy.
Edward Duda Jr.
Dover, N.J.

If Mr. Asimov really likes the robot on page 27 better than the one on page 26, he should go see Dr. McDonald.
Tommy Munger
Lake Charles, La.

The first and third letters suggest some people didn’t understand Asimov was joking. The second letter is just a bit creepy.

Finally, there were four letters about Hullabaloo:

Hullabaloo is a misnomer. It should have been called Hullavabooboo! I’d rather watch commercials!
Janet Walls
North Sacramento, Cal.

I nominate it for Bomb of the Year.
K. E. Elliot
Richmond, VA.

The program is aimed at young people but the gyrations of Joey Heatherton would be better suited to a burlesque stage.
Mrs. William P. Hanson
Sacramento, Cal.

It think Hullabaloo was wonderful!. It’s our [teen-agers] kind of music. if you old fogies and critics don’t like it, turn the dial please.
Sybil Henston
Lexington, KY.

According to an editorial note, letters about Hullabaloo have been running about 20 to 1 against.

Premiering this week on CBS on Sunday, January 30th was legal drama For the People, from Herbert Brodkin. The series is perhaps best known for starring William Shatner and for being cancelled, thereby ensuring that Shatner was free to star in Star Trek. Shatner played an assistant district attorney. A total of 13 episodes, including a crossover with The Doctors and the Nurses (mentioned in this issue’s “For the Record” column), were produced with the last airing on May 9th. The premiere received a TV Guide close-up and a half-page advertisement:

Advertisement for the Series Premiere of For the People on CBS – Copyright 1965 Triangle Publications, Inc.

Also premiering this week was Big Three Golf on NBC, an eight-part golf tournament airing Saturdays from 5-6PM. The big three were Jack Nicklaus, Arnold Palmer and Gary Player and the winner at the end of the eight matches would get $50,000. Also in sports, ABC aired the first of four “American Sportsman” specials on Sunday at 5PM. Curt Gowdy hosted the specials. This first one featured AFL commissioner Joe Foss, fishing expert Joe Brooks, fisherman Bill Carpenter, actor Robert Stack, and hunter Tony Archer. There were plenty of other sporting programs over the weekend, including bowling, basketball, surfing, bobsledding, track and field, roller derby, auto racing, horse racing, hydroplane racing, and even snake hunting (on NBC Sports in Action).

CBS aired an hour-long documentary called “The Mystery of Stonehenge” from 10-11PM on Monday, February 1st. Jane Powell hosted another installment of NBC’s The Bell Telephone Hour from 10-11PM on Tuesday, February 2nd. The first of four Alcoa Preview specials aired on ABC from 10-11PM on Thursday, February 4th with Douglas Fairbanks taking viewers behind the scenes of music (Tony Bennett recording an album), movies (the making of The Amorous Adventures of Moll Flanders), and the stage (Broadway’s The Roar of the Greasepaint–the Smell of the Crowd).

The big news locally was probably the Monday, February 1st boxing match between Floyd Patterson and George Chuvalo, available for those willing to shell out $2.50 to Phonevision/WHCT-TV. Unlike the November 16th, 1964 Clay-Liston fight that Phonevision planned to carry but couldn’t after it was cancelled, this bout actually took place. Patterson won. Here’s an advertisement: 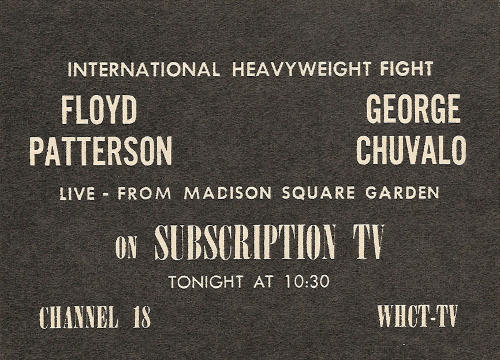