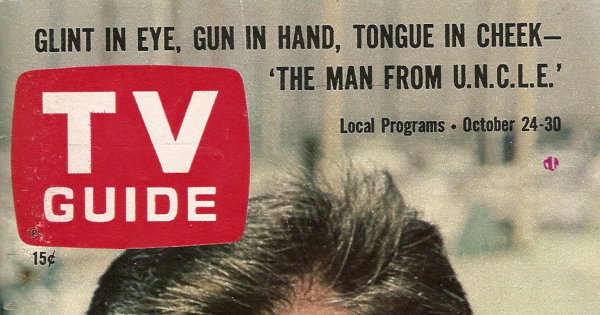 On the Cover: Robert Vaughn of NBC’s The Man from U.N.C.L.E. (photograph by Sheedy-Long).

Note: This was the first of several issues not in my collection. The copy I was able to acquire is the Philadelphia Edition, which includes listings for a total of just nine stations in and around Philadelphia (compared to the 16 stations included in the Western New England Edition). You’ll notice that the issue itself is in very good condition. The cover is slightly detached from the staples and unfortunately has a mailing label but otherwise is nearly pristine condition with sharp edges and very few creases or tears.

The cover article this week is a far-too-short look behind the scenes of NBC’s new spy series for the 1964-1965 season: The Man from U.N.C.L.E.. Personally, I’m a bigger fan of The Girl from U.N.C.L.E. but I still enjoyed the article and it had a lot of behind-the-scenes information, including some insight into just how much of a role Ian Fleming — the creator of James Bond — had in developing the series. According to Norman Felton, despite reports to the contrary, Fleming had next to nothing to do with the series.

Felton talked to him about and Fleming was excited about the concept but was forced to withdraw from any actual involvement after a heart attack. His only real contribution was the name Solo, which was initially going to be the name of the series until producers for the James Bond movie series got involved, so the name was changed to The Man from U.N.C.L.E.. Felton gave all the credit for developing the series to Sam Rolfe. 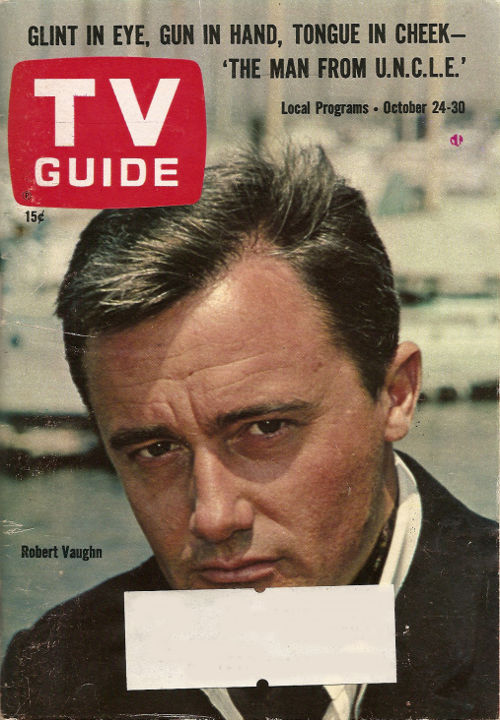 The article also includes a few other interesting bits of information. For example, a legal charter for the United Network Command for Law and Enforcement was drawn up and the cast and crew became members. Felton and Rolfe once handed out U.N.C.L.E. membership cards at an NBC affiliates meeting. The cards were accidentally printed in three different colors (gold, silver, and blue) and the two were immediately besieged by calls from people asking why they received a silver or blue card and not a gold one. People who would not believe that the colors were meaningless. Oh, and that iconic U.N.C.L.E. gun? Four were built for the series. Each cost $3500. They could fire real bullets or 38-caliber blanks.

The other articles aren’t quite as a good. “Lincoln Learned a Lesson” is an overview of the impact of photographs and later moving images on Presidential elections. Senator Goldwater, for example, asked the networks for three things in their coverage of the 1964 Republican National Conventions: that they stay away from low angles to avoid any Big Brother imagery; that they not cut to reaction shots from the crowd during his speech; and that no “creepie-peepie” cameras (small, handheld video cameras) be used. The networks, according to the article, ignored his requests.

Here’s what NBC’s James Kitchell had to say about covering politicians:

“Good taste is the only restriction we recognize in deciding how to photograph a politician. If a speaker has a big scar on one side of his famous, we stay off it. Mrs. Johnson doesn’t happen to photograph well in full profile, and you’ll rarely see her pictured that way on television. It’s all mostly a matter of good taste.”

(I doubt TV Guide writes much of anything about politics these days.)

I admit to not reading all of Melvin Durslag’s “If Televised Football Arrives…” because it wasn’t about television, not really. It was about football coach Sid Gillman and how the American Football League had signed a huge five-year contract with NBC and would soon be flush with money. “Never Toss a Tomato at A Lady” is a fluff piece on actress Cathleen Nesbitt, then co-starring on ABC’s The Farmer’s Daughter. Finally, TV Guide published another excerpt from Only You, Dick Daring! Or How to Write One Television Script and Make $50,000,000, written by scriptwriter Merle Miller (with Evan Rhodes) about his experience writing a pilot script for a proposed CBS series called Calhoun to star Jackie Cooper.

Disappointingly, the “As We See It” editorial this issue was little more than an advertisement for Only You, Dick Daring! which makes me wonder whether the publisher paid TV Guide to feature the excerpts. The editorial claims that the chapters excerpted in TV Guide “are funny, and instructive, for they reveal something of how an idea becomes a script, something of what goes on at a meeting of network brass and something of why much of television is bland, safe, unexciting.” That may well be true but such effusive praise on top of two excerpts seems like a bit much.

Rounding out the national section this week are a picture feature on the opening credits to Gunsmoke being updated for the first time in eight years; another Designer’s Choice feature showcasing outfits by Bud Kilpatrick modeled by actress Gena Rowlands, and a crossword puzzle.

Cleveland Amory’s review in the listing section this week focused on ABC’s Bewitched. He’s a fan, praising Sol Saks, Danny Arnold and William Asher “for their switch on this old-wives’ witch story–particularly the basic idea of making their girl a young, suburban housewitch. He calls Elizabeth Montgomery “enchanting” and Dick York both “sometimes trying” as well as “winning” in some scenes. But he’s critical as well, particularly of Agnes Moorehead for “overplaying her part and witching about everything.” He doesn’t like the commercials featuring Montgomery and Moorehead, either. In the final paragraph of the review, he somehow he finds a way to use every possible variation of the word witch (i.e. “witching hour,” “witch hunt,” “witch doctor”). It unfortunately obscures his point. I think he’s suggesting that that the series is in danger of relying too much on witchcraft special effects but he might be seriously concerned about the depiction of witchcraft on prime time television.

Notes from the Hollywood and New York TV Teletype columns:

The letters page is once again filled with great responses to the new season, most about new shows:

Slattery’s People gets my vote–whatever his party affiliation may be. It may be a bit premature, but here’s hoping that he comes up for reelection.
John A. Mutka
Hobart, Ind.

Cheers for the new “chuckles” season. With death and taxes always present, it seems good to spend an evening with such goodies as The Tycoon, No Time for Sergeants, etc. It’s too bad, with so many poor programs, the networks have to try to eliminate good shows by spotting them opposite each other, i.e., Bewitched against Dr. Kildare.
E. Edgerley
Westerly, R.I.

Whoever said that Dennis Weaver would always be a “Chester” can go limp around the bock. Kentucky Jones is one of the few new programs which I have thoroughly enjoyed.
(Name withheld)
Sumter, S.C.

Last night ended The Danny Kaye Show for me. I can’t bear to watch that talented man do the trashy stuff he is doing this season.
K. DeWitt
New York, N.Y.

An eagle feather to Daniel Boone. It is refreshing to watch a show in which the American Indian is portrayed as a human being rather than a howling savage.
Beth Oxford
Phoeniz, Ariz.

There’s also a letter critical of Cleveland Amory’s review of Peyton Place in the October 10th issue and a very lengthy tirade from a reader angry at how the networks are drowning out the closing themes of shows with promotional voiceover announcements for other shows.

The 1964 Summer Olympics ended on Saturday, October 24th. NBC aired a two-hour special from 5-7PM that included finals in basketball, boxing, and equestrian jumping, plus the closing ceremonies and highlights from the games. A final hour-long special aired on Sunday, October 25th from 6:30-7:30PM consisting of interviews with athletes and coaches, reviews of outstanding performances, and the final medal count, plus a preview of the 1968 Summer Olympics in Mexico City. There was a lot of football on Saturday and Sunday and a lot of advertisements for football.

There was also a lot of political and election programs throughout the week. Both President Johnson and Senator Goldwater were on television on Thursday, October 29th. Johnson spoke live from Philadelphia’s Convention Hall on WFIL-TV (Channel 6), the city’s ABC affiliate, so My Three Sons was pre-empted locally. A taped Goldwater speech aired nationally on CBS from 9:30-10PM, so The Baileys of Balboa was pre-empted across the country.

The issue is filled with advertisements for election coverage, including a full-page ad for NBC’s national coverage and WRCV-TV’s (Channel 3) local coverage with Vince Leonard. There are also some small ads for WCAU-TV (Channel 10) sprinkled throughout the issue in the form of black arrows running across the bottom of several pages, enticing viewers to follow TV10 on election night.

A new game show called What’s This Song? premiered Monday, October 26th at 10:30AM on NBC, hosted by Win (later Wink) Martindale. Beverly Garland and Lorne Greene were the guests. Each week the celebrities teamed with audience members to identify songs.

There are an incredible nine TV Guide close-ups this week:

One of these is for a local program so now I’m curious about whether the close-ups were typically the same in every regional issue or if different regions had very different close-ups each week.

I had hoped to perhaps find some short-lived shows being aired in syndication in the Philadelphia area but other than The Rebel, they were all well-known shows like I Love Lucy, The Real McCoys, The Andy Griffith Show, Father Knows Best, and Surfside Six.

Philadelphia had a lot of local programming, much more than Western New England. I can’t hope to identify everything local. There is of course the Mock Election Returns broadcast on WFIL-TV on Wednesday, October 28th, which received its very own close-up. The elaborate four-week mock election involved high schools throughout the tri-state area (in this case the tri-state area means Delaware, New Jersey, and Pennsylvania). Rallies for either Goldwater or Johnson were held each Saturday for four weeks, the last of which aired on Saturday, October 24th.

The election results program aired live on WFIL-TV, a mixture of films of actual Presidential campaigning and taped highlights of the mock rallies. The schools voted using paper ballots or voting machines and reporters at each school were to call WFIL-TV with the results. Joel Alberts and John Roberts reported on the election results and interviewed student campaign managers. What are the chances someone reading this participated in those mock elections fifty years ago?

WFIL-TV also pre-empted Bewitched locally on Thursday, October 29th in favor of an installment of its Studio Workshop series, which this week presented The Paul Roberts Choir. 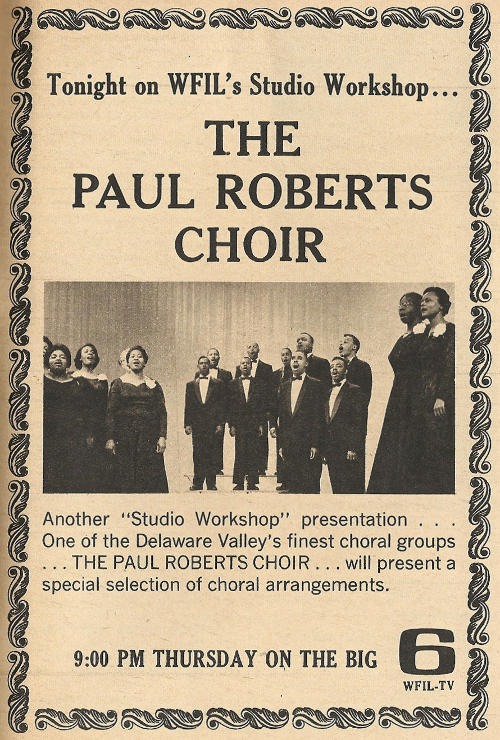 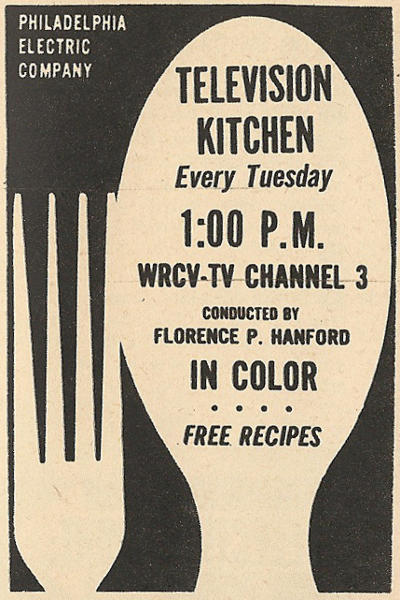 WHYY-TV (Channel 10) was the only educational station serving the Philadelphia region in 1964. It appears to have offered a lot more locally produced programming than WEDH-TV out of Hartford. It had its own news shows and also aired local school reports and political debates.

And of course there was local news, sports and weather on several different channels throughout the week.