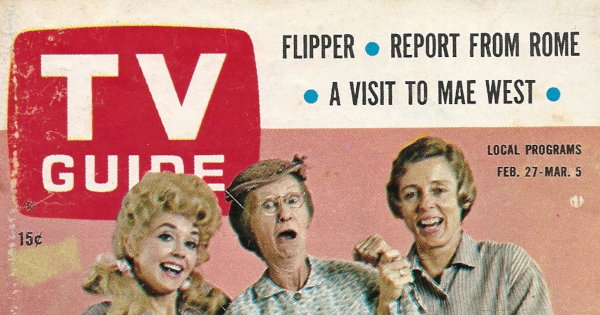 On the Cover: Donna Douglas, Irene Ryan, and Nancy Kulp of The Beverly Hillbillies (photograph by Gene Trindl).

“How a Correspondent Spends His Days and Nights” could have been an interesting article. It was written by Irving R. Levine, NBC News Bureau Chief in Rome, but spends far too much time discussing differences between the United States and Italy and not enough exploring how he files reports and actually does his job. Levine reveals that he sometimes receives calls from New York at 2AM local time, pours through Rome’s 12 daily newspapers every day, and spends a lot of time covering the Vatican.

Near the end of the article he gives two examples of how attempts to film were interrupted. Once, while trying to film a narration for an installment of NBC White Paper, Levine found a tranquil spot outside Rome that he hoped would be quiet. Unfortunately, a movie company had the same thought. Another time, while filming for The Huntley-Brinkley Report atop a building in Ivrea, Levine was surprised when an explosion rocked the building due to excavation work. 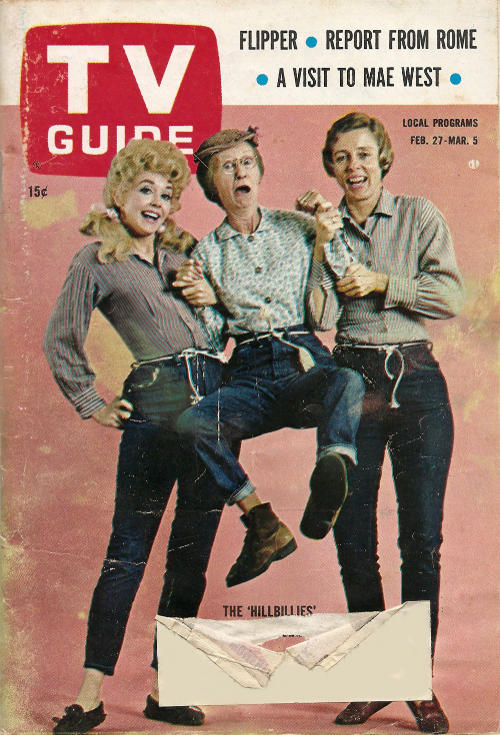 I was disappointed but not surprised that Marian Dern’s “Man in Pursuit of Himself” didn’t mention Bob Crane’s involvement with UHF station WICC-TV (Channel 43) in Connecticut when it launched in 1953. At the time, Crane was a disc jockey for WICC radio. The station was a failure and went off the air in 1960, several years after Crane had moved to the West Coast. In 1963, he got a recurring role on The Donna Reed Show but by the time this article was published he had been let go after asking for more money. But he has another project in the works, a pilot for CBS called “The Heroes.” [Hogan’s Heroes would run for six seasons and 168 episodes on CBS from 1965 to 1971.]

Dwight Whitney’s three-page “They’re Still Accepting That Invitation” is another brief TV Guide biography, this one about Mae West. It has little to do with television. Whitney mentions West’s March 1964 guest appearance on Mister Ed and her hope that she’ll make another appearance in the fall. [She didn’t.] She says she doesn’t know who Donna Reed is and has has turned down plenty of movie and TV roles in the past decade because “they are not right for me. They are not Mae West.” But she does apparently hope to start appearing in two yearly TV spectaculars. “I’m waiting for pay-TV,” she explains. “I bet I’ll rate No. 1 on it.”

“They’re Still Single” is an unusual article about the women of The Beverly Hillbillies: Nancy Kulp (Jane Hathaway), Irene Ryan (Granny), and Donna Douglas (Elly May). It’s unusual because it is a transcript of interviews with the three actresses that were conducted separately. Although that’s explained, intertwining the interviews still makes it seem like the three actresses were interviewed together. The three discuss fame and success.

The final article is a one-page piece on actress Ellen Madison written by Ellen Madison. Would you believe she’s another actress I’ve never heard of? Her Internet Movie Database profile reveals she made guest appearances on a variety of TV shows during the 1960s, including The Asphalt Jungle, Route 66, The Defenders, and The Eleventh Hour. She states she was “mentioned” for Emmy Awards for her work on The DuPont Show of the Week (“Body and Soul,” 1959) and Armstrong Circle Theatre (“Prescription-Hypnosis,” 1959).

The “As We See It” editorial is all about comedies this week. 36 of the 62 TV shows in consideration by the networks for the 1965-1966 season are comedies. Add in sponsor-backed shows and there are at least 42 comedies in development. Why? Because 10 of the top 15 shows in January 1965 were comedies and the only new shows in the Top 15 were comedies (Gomer Pyle U.S.M.C., Gilligan’s Island, and Bewitched). Comedies, it seems, appeal to young married housewives who have a huge influence on the country’s buying. Also, comedies don’t ask too much of viewers the way dramas do, allowing commercials to “make a deep, lasting impression.”

There is once again no review this week. Cleveland Amory is still judging the International Television Festival in Monaco. According to the January 30th issue, Amory’s reviews will return in March.

Rounding out the national section this week is a picture feature explaining how Flipper (real name Suzy) is trained. Once again it has a lot of text for a picture feature. There is also a page of “TV Jibe” comic strips poking fun at television and, of course, the regular TV crossword puzzle.

The letters page includes just five letters this week. Two are responses to the February 13th article about a pirate TV station in the Netherlands. One takes issue with the article implying that Dutch TV is “dictatorial” while the other applauds the Dutch government’s response, arguing that no democratic government can “tolerate unlawful operations, be they of moonshine stills or of TV stations.”

The other three letters are all quite interesting so rather than paraphrase here they are in their entirety:

This is a plea for help. A sort of teen-age tyranny is taking over radio and television–the amateur musician with his clumsy rhythm, unkempt voice and twanging guitar. We beg you for a return to quality. We request that good show music, big bands, jazz artists, bossa nova, and the classics be given equal time with this teen-age garbage.
Ed Mulford, Secretary
Connecticut Jazz Appreciation Society
Monroe, Conn.

Since the Nielsen 1200-or-so samplers determine what TV shows we will see, I suggest the networks take them all to New York each year and show them the propose new shows with the old ones in various arrangements and then take a vote. Then we could see their choices right from the start. We viewers would be saved the disappointment and pain of giving up favorite shows just after we have got used to enjoying them.
Frances A. Graves
Kirkland, Wash.

Will you please settle a wild rumor that is running rampant over the city of Shreveport and environs. It says The Fugitive‘s last chapter has been written and actually shown in some cities and that policeman Gerard is the real killer of Kimble’s wife. Kimble, in the last episode, finally finds the one-armed man who tells a horrendous tale of a love affair between Lt. Gerard and Mrs. Kimble, and reveals that Gerard killed her.
Janice F. Angevine
Shreveport, La.

An editorial note in response to the last letter pointed readers to the “For the Record” column which addressed the false rumor relating to The Fugitive.

It was a very normal week for network television, with few specials, likely due to the end of February sweeps the previous week. There was a CBS Special Report called “T Minus 4 Years, 9 Months and 30 Days” on Monday, March 1st examining whether the nation would meet the goal of putting a man on the Moon by 1970. Walter Cronkite anchored the report which was produced by Don Hewitt. According to the TV Guide listing it was taped that very afternoon at space centers across the country. Featured were Dr. Wernher von Braun and John Glenn. On Tuesday, March 2nd NBC aired another installment of The Bell Telephone Hour from 10-11PM with Robert Goulet as host. And on Thursday, March 4th NBC aired another installment of Perry Como’s Kraft Music Hall from 10-11PM.

On Sunday, February 28th WNHC-TV (Channel 8) aired a morning seminar from Albertus Magnus College in New Haven, CT. WTIC-TV aired another installment of From the College Campus from 11:30AM-12PM. The topic this week was “The Changing Perspective of High School Science Teachers.” Edward Close from Saint Joseph’s College moderated. From 12-12:25PM WNHC-TV aired eComments and People with highlights from the University of Connecticut’s Winter Weekend as well as a preview of the nutmeg Ballet Guild benefit performance. This was followed by a five-minute capitol report.

There were a lot of advertisements in this issue, both for commercial products and for various television shows and movies. Here’s one for repeats of East Side/West Side on WHYN-TV: 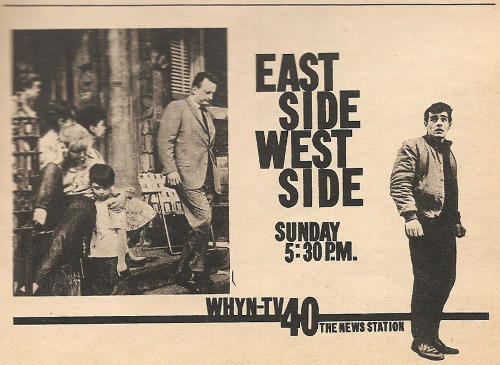 And here’s an advertisement for WNHC-TV (Channel 8) and its weekday late afternoon kids line-up: 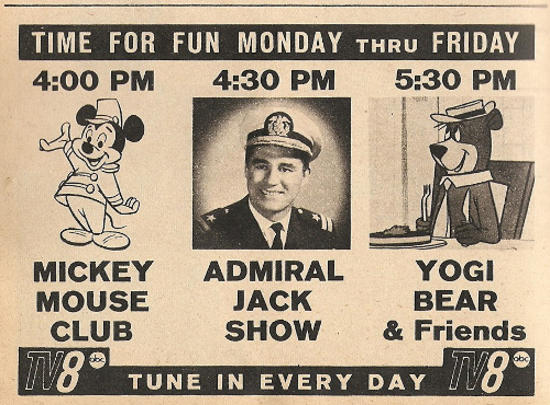 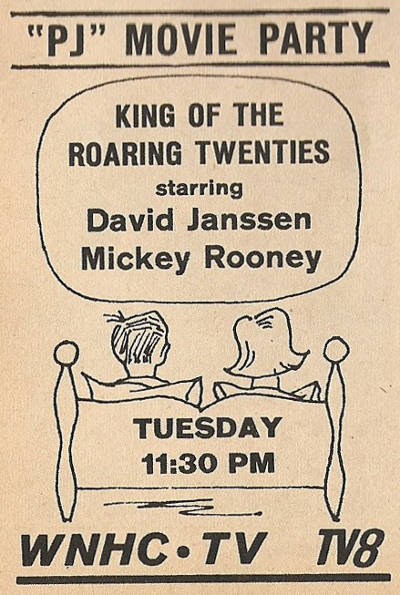 Wednesday, March 3rd, 1965
Roland Nadeau and Ken Wilson give an organ and piano recital of classical and contemporary music.