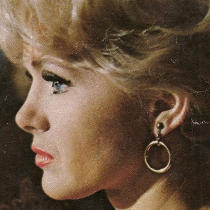 On the Cover: Connie Stevens (photograph by Gene Trindl).

There are only three articles in this issue which, I believe, makes it the issue with the fewest articles to date. None of them are really all that great. “‘An Apple Blossom with the Wham of a Bulldozer,'” the cover article by Richard Warren Lewis, is about actress Connie Stevens whose new ABC sitcom Wendy and Me will not be returning for the 1965-1966 season.

The article opens with a story about how one day Stevens overslept and was 50 minutes late for a rehearsal. George Burns along with the rest of the cast and crew decided to get revenge by staying silent after she read her first line. Everyone stared at her until her face turned bright red and then they all burst into laughter. 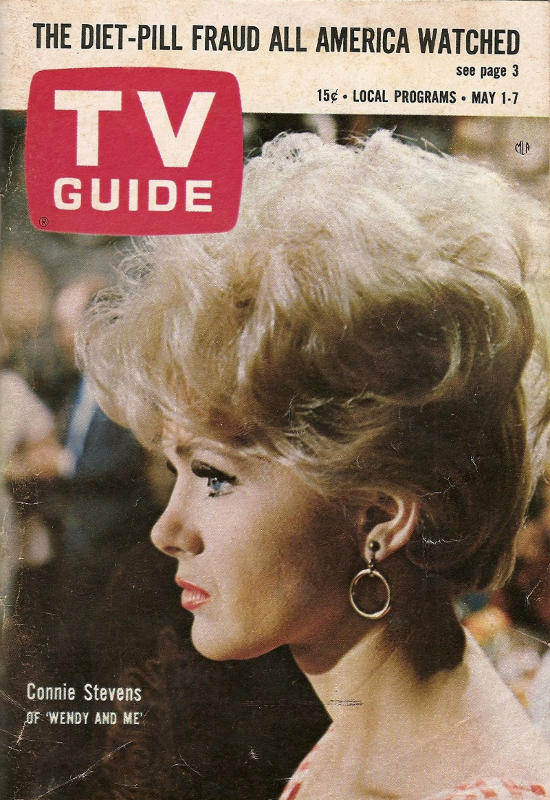 Stevens apparently doesn’t mind that her series has been cancelled:

A while back a lady told me: ‘You’re so wonderful in that show, you’re gonna be on the air for 15 years.’ My reaction to that was–my eyes widened and I panicked. I just don’t have the emotional capacity to stick with something for that long. I have to be movin’ all the time. I hate to disillusion people and say I love this part and I could do it for the rest of my dying days.

When she was still on Hawaiian Eye she got into a dispute with Warner Brothers, was suspended, and then was charged with breach of contract for performing in a nightclub in Australia. Everything was settled out of court and she was allowed more freedom. Her current contract allows her time off for night club appearances and lets her appear on other network TV shows. Warner Brothers also gave her a very nice dressing room for Wendy and Me. But her dream isn’t to be a TV star — Connie wants to be a big movie star.

Peter Wyden’s lengthy article “Step right up, folks” is adapted, but not excerpted, from his new book The Overweight Society. It examines the television campaign promoting Regimen diet pills that started in 1958. It included live weigh-ins on NBC’s Today (and shows on other networks) by women supposedly losing weight successfully thanks to Regimen Tablets, including Mrs. Dorothy Bryce, who actually went to extreme measures to lose weight fast. By 1959, the network’s concerns about the product and its promoter eventually became too great to be ignored. Regimen Tablets were eventually pulled from the market and there were federal investigations and lawsuits during the early 1960s.

It’s tough to summarize the article, which focuses in part on how NBC advertising standards were stretched to the limit:

NBC, for example, would not permit Mrs. Bryce to assert that she lost her weight “without diet.” She was merely allowed to say that she lost it “without starvation diet.” Since she did eat 800 calories a day and did not, in fact, starve to death, this was a truthful, if well-weaseled, statement.

[Details of the Regimen Tablet scandal can be found in this September 1966 U.S. Court of Appeals ruling.]

The third and final article isn’t actually an article but a transcription of remarks made by Max Shulman, creator of The Many Loves of Dobie Gillis, at a writing seminar held by the Art Directors Club of New York. He discussed what’s wrong with television, laying the blame on the fact that there are too few good writers and too many TV scripts to be written:

Therefore you’ve got a situation, a business, in which writers who are bad more than half the time, even when they’ve got all the time in the world, and no pressure, are under a gun that simply makes them shake and quiver and tremble all over. That is why television is bad.

[I imagine this would have sounded better delivered as a speech. It reads tongue-in-cheek to a degree but it’s tough to say whether Shulman was being serious or facetious or both.]

Cleveland Amory reviews Voyage to the Bottom of the Sea in this issue. Here’s his first paragraph:

We promise you we are going to resist the temptation to say this show is the bottom; because it isn’t. Neither, however, is it, shall we say, high adventure. It’s just middling. Your children will love it and, as often as not, Voyage to the Bottom of the Sea‘s suspense will offer you escape. And these days, that’s not too bad, television fare being what it is.

The rest of the review covers the cast and characters and plots of several episodes with relatively little critical commentary from Amory.

Rounding out the national section is a picture feature spotlighting eight dogs trained by Frank Inn, all of whom have a special talent; a recipe for Spanish Paella; and the regular TV crossword puzzle.

The letters page this week includes eight letters, half responding to the April 17th cover article about David McCallum:

All the fuss over David McCallum would be much less astonishing to “show biz” authorities if they would think back a few years to women who walked out of “Gone with the Wind” in love with Leslie Howard. There’s something intriguing about a man with brains, breeding and talent.
Mrs. Leonard Grossman
Silver Spring, Md.

Don’t use the hackneyed designation “sex symbol.” What he has is as old as the hills–plain, old-fashioned, high-powered charm.
Maxine Montgomery Coan
Galesbury, Ill.

After I see the show I can’t tell what the episode was about. I watch it to see Napoleon in action.
Mrs. Carlton W. Chick
Kennebunkport, Maine

Illya may appeal to the coeds, but once you graduate it’s got to be Napoleon.
Anne Woodford
Cumberland, Ky.

There was also a letter praising For the People while lamenting its cancellation; a letter agreeing with Cary Middlecoff’s warnings about golf; a letter saluting the end of The Rogues; and a letter in response to Marian Dern’s comment in her April 10th article that Walter Brennan owns half of Oregon with his 18,000 acres, which is a rather small farm to those in Oregon.

There was plenty of baseball and other sports during the weekend and a variety of specials throughout the week. Viewers in Eastern New England saw the Pittsburgh Pirates face off against the St. Louis Cardinals at 2PM on ABC on Saturday, May 1st. At 5PM, CBS broadcast the 91st Kentucky Derby live from Churchill Downs with Jack Drees calling the race. Opposite the Kentucky Derby, ABC’s Wide World of Sports covered the third round of the PGA Tournament of Champions (stock car racing was also scheduled, time permitting).

All three networks broadcast the live hour-long “This Is Early Bird” inauguration special at 1PM on Sunday, May 2nd. Featured were segments covering medicine, sports, crime prevention, music, and men at work. Pool producers for the special were Av Westin of CBS and Derek Burell-Davis of the BBC. ABC carried the final round of the PGA Tournament of Champions at 4PM that afternoon. [Locally, WNAC-TV (Channel 7) and WNHC-TV (Channel 8) joined the two-hour telecast in progress at 5PM.] At 5PM, NBC aired “LBJ Report No. 4” studying the Johnson Administration.

On Monday, May 3rd NBC’s Today was carried live from Europe from 7-9AM thanks to the Early Bird satellite. At 1PM, CBS pre-empted As the World Turns to carry “Town Meeting of the World” live from Europe also via Early Bird. The hour-long special featured a discussion of the situation in Vietnam by statesmen of the Atlantic Alliance. NBC pre-empted a repeat of Karen at 7:30PM for a special live telecast of the BBC’s Panorama documentary series co-hosted by Chet Huntley in London and the BBC’s Richard Dimbleby in New York City, made possible once again by Early Bird. At 9PM, Lorne Greene hosted “American West” on NBC, a special telling the story of the country’s beautiful land west of the Mississippi. Competing on ABC was “Melina Mercouri’s Greece,” an hour-long special in which the actress toured her native country. At 10PM, CBS repeated “Town Meeting of the World” for prime time viewers to enjoy, pre-empting CBS Reports.

NBC’s That Was the Week That Was aired its final episode on Tuesday, May 4th at 9:30PM. On Wednesday, May 5th at 9:30PM CBS premiered a new twice-weekly series called Our Private World, a spin-off of its daytime soap opera As the World Turns. Eileen Fulton starred as Lisa Hughes, who left her small town to work at Chicago’s University Hospital. The second weekly episode debuted on Friday, May 7th at 9PM.

Locally, baseball fans had even more opportunities to enjoy America’s Pastime. WNHC-TV (Channel 8) carried a game between the Baltimore Orioles and the New York Yankees at 1:55PM on Saturday, May 1st. WHDH-TV (Channel 5) aired a game between the Boston Red Sox and the Detroit Tigers at 2:15PM that same day. At 8PM, WGBH-TV (Channel 2) aired “Toward a New Era,” a live 10th anniversary special that included the formal dedication of its new Western Avenue studios.

On Sunday, May 2nd at 10:30AM, WNAC-TV (Channel 7) aired highlights of the 37th anniversary dinner of the National Conference of Christians and Jews held on April 27th. It featured prominent Greater Boston residents receiving citations for outstanding contributions in the field of human relations. At 11:30AM, WTIC-TV (Channel 3) aired Comments and People, with members of The Amity Players presenting musical selections from Pajama Game. WNHC-TV carried another baseball game (Baltimore Orioles vs. New York Yankees) at 12:55PM, meaning it didn’t air the Early Bird inaugural telecast from 1-2PM.

At 2:30PM, WHDH-TV and WPRO-TV aired a baseball game between the Boston Red Sox and the Detroit Tigers at 2:30PM. At 4PM, WNAC-TV pre-empted the first hour of the PGA Tournament of Champions on ABC to air another installment of Esso Repertory Theatre featuring Luigi Pirandello’s Chee-Chee and The Man with the Flower in His Mouth.

WPRO-TV (Channel 12) pre-empted Petticoat Junction on Tuesday, May 4th at 9:30PM for “Lung Cancer–Beating ‘the Big C’,” an installment of its local documentary series March of Medicine. Mort Blender took viewers into the operating room to report on the fight against killer cancer. Here’s an advertisement: 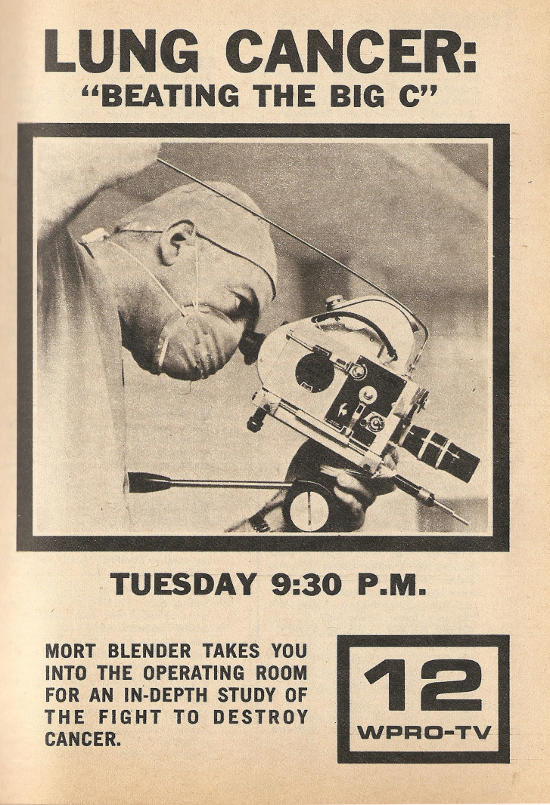 Also, WGBH-TV carried another college lacrosse game on Thursday, May 6th at 7:30PM, this one between Tufts and Holy Cross.

Here’s an advertisement for Romper Room on WHDH-TV with Miss Jean: 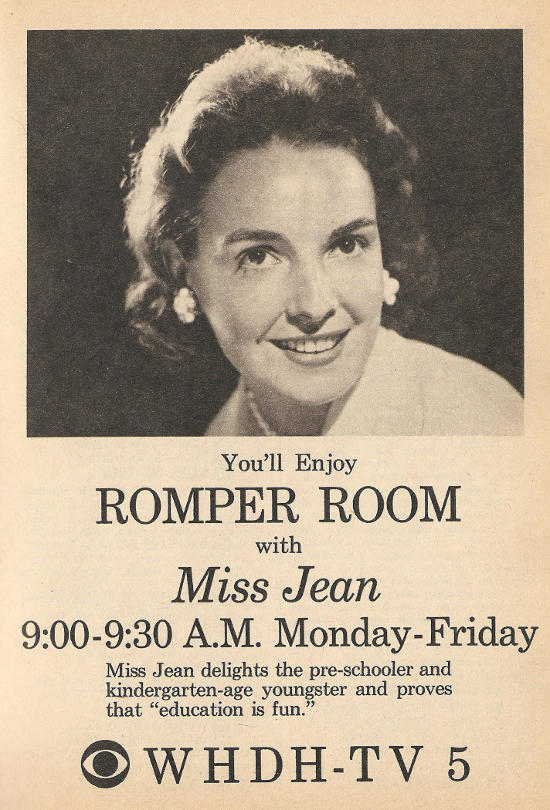 And here’s an unusual advertisement for upcoming The Merv Griffin Show on WBZ-TV: 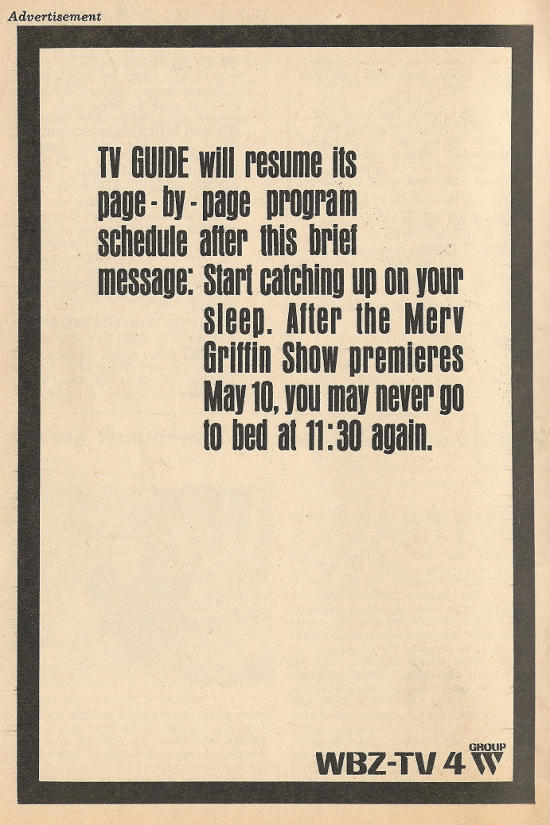 Tuesday, May 4th, 1965
Seasonal opportunities for out-of-doors enjoyment is presented by Jack Woolner.

Wednesday, May 5th, 1965
Saint-Saens’ “Carnival of the Animals” is interpreted.

Thursday, May 6th, 1965
“National Music Week” with a spring quartet from the Boston Youth Symphony.