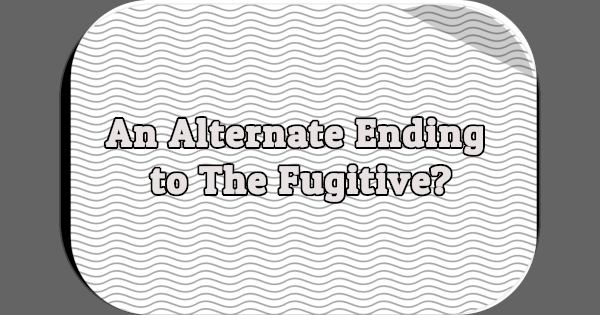 I was very intrigued when I came upon this curious bit of television history. But first, for those of you not familiar with The Fugitive, some background:

The Fugitive premiered on ABC on Tuesday, September 17th, 1963 at 10PM. David Janssen starred as Dr. Richard Kimble, a man convicted of murdering his wife who escaped while being transported to his execution. Relentlessly pursued by Lt. Philip Gerard (played Barry Morse), Kimble just as relentlessly chased after the “one-armed man” (played by Bill Raisch) who he saw fleeing from his home the night his wife was killed. The series ran for four seasons before coming to an end. The Fugitive was created by Roy Huggins and executive produced by Quinn Martin.

On Tuesday, April 11th, 1967, the fourth season of The Fugitive came to an end with Kimble still on the run. Repeats began airing the following week. Viewers who had watched 118 episodes of the series were frustrated by the lack of closure. The Chicago Tribune tried to get to the bottom of things, contacted ABC, and printed this quote on April 19th:

“There WILL be an ending. The whole thing probably will be settled sometime between now and September, when the show goes off the air. One or two more episodes will be shot to resolve the unanswered: Was Kimble the criminal or the one-armed man?” [1]

On July 10th, 1967, an article by Hal Humphrey of The Los Angeles Times revealed that a two-part series finale to The Fugitive would air on August 22nd and August 29th. Star David Janssen refused to discuss how the series would end:

“A great many people worked hard to do these two final episodes, so I’d be a real louse to ad-lib it for you now in five minutes.” [2]

Executive producer Quinn Martin also kept silent on the ending in an article for The Chicago Tribune on July 30th:

“To discuss the conclusion now would only spoil it for the audience. Suffice it to say the concluding two episodes are the culmination of the entire series–and I feel sure no one will be disappointed.” [3]

But all those viewers couldn’t quite agree on how The Fugitive ended. The October 16th, 1967 edition of The Chicago Tribune‘s entertainment Mailbag feature included the following question and answer:

WAUKESHA, Wis.–My sister just told me that out west there was a different ending for The Fugitive. She says it turned out that Gerard killed Helen Kimble. Was there such an ending?–A.W.

O no, not again. For weeks, we’ve been getting reports from people that claim their “Aunt Tessie in Winnipeg” or “Cousin Cecil [i]n Apache Pass, Ariz.” saw The Fugitive with a different ending. The answer, once again, is NO there was only one ending to The Fugitive–the ending you saw. And incidentally, you might be interested to know that out in California there were rumors that when the last episode of The Fugitive was shown “back around Illinois and Indiana,” there was a different ending, with Gerard as the guilty one. What a life.” [7]

Do you remember hearing about an alternate ending to The Fugitive back in 1967? Hit the comments with any rumors you might have heard.

32 Replies to “An Alternate Ending to The Fugitive?”