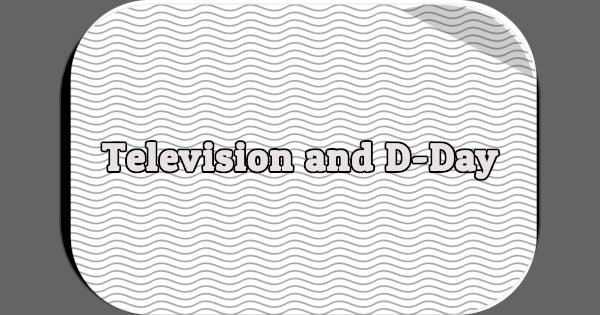 Today marks the 70th anniversary of D-Day, the massive invasion of Normandy by Allied forces during World War II. More than 150,000 troopers landed on the beaches of Normandy that day. I’ve written about the use of television to report news of the attack on Pearl Harbor on December 7th, 1941. As the anniversary approached earlier this week, I wondered if television played a role in relaying news of the invasion.

For the next 24 hours, radio aired nothing but news and analysis of the invasion, cancelling most commercials and regular programming.

During the 1940s, television in the United States centered around stations in New York City. But World War II was a radio and newspaper war. Television was, at best, an afterthought. Recall that limited commercial television began just six months before the attack on Pearl Harbor. Many stations soon went dark or curtailed their programming due to wartime restrictions.

According to TV listings published in The New York Times, the only station scheduled to be on the air on D-Day was DuMont’s WABD:

WABD scrapped the planned WOR program scheduled for 9PM ET. In its place, the station broadcast “a special invasion program that included a roundtable discussion led by Bob Emery, producer of the program, and a summary of the news, presented against a background of newspaper headlines” [2].

New York City’s NBC station, WNBT, also broadcast 15 minutes of D-Day coverage at some point that night. It featured analyst H.K. Kaltenborn, who spent most of the day reporting on radio. He “presented a recapitulation of the day’s news, illustrated by maps of the invasion area” [3]. WCBW, the CBS station, remained off the air all day.

There were a handful of other television stations operating outside New York City. They may have also broadcast news of the invasion.

The Day After D-Day

The following day, WABD was again the only station scheduled to be broadcasting, from 8:15-9:45PM. The lineup that night included a news report by Sam Cuff (who previously hosted The Face of the War on WNBT) discussing the invasion. A review of WABD’s June 7th programming in The Billboard had this to say:

Sam Cuff’s news show was good, altho fewer views of the map (camera was trained on it for 10 long minutes), and a completely white pointer against the dark background would help. There is, of course, much to be said for the all-map technique. It does improve the commentary by allowing the speaker to look at his notes all the time. [4]

Additional reports on D-Day were likely made on television later in the week.

2 Replies to “Television and D-Day”