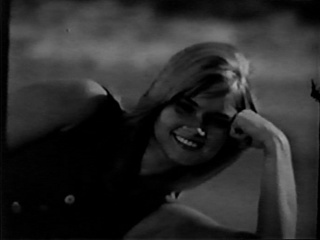 Here’s a commercial for Clairol’s Summer Blonde hair lightener featuring model Andrea Dromm, who had a brief acting career in the 1960s, including a very small role in Star Trek‘s second pilot episode (“Where No Man Has Gone Before,” originally broadcast September 22nd, 1966). This commercial likely dates from 1966/1967. Unfortunately, this is a black-and-white print.