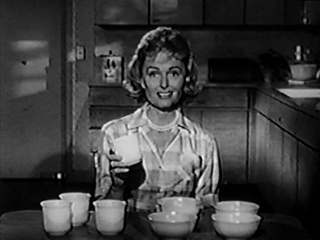 Although I initially referred to this as a commercial, it isn’t really what most people would call a commercial. Instead, it is an announcement for a Campbell Soup giveaway in which viewers could send in ten labels and get Campbell Soup bowls or mugs. It would have been attached to an episode (or episodes) of The Donna Reed Show, which was sponsored by Campbell Soup Company. The very beginning is cut off, so you can’t tell exactly what Donna Reed is saying but it is probably something along the lines of “stay tuned after the show” or “coming up after the show.” Note the fade to black after the first seven seconds. Either the entire show or a portion of it would have aired following Reed’s brief introduction to the contest. Then, Reed explains the contest. At roughly the :45 mark Reed stresses the fact that viewers had to send in ten different labels.

After the announcement is another fade to black and then a sponsor spot for various Campbell Soup products and a notice that the upcoming episode would be sponsored by Johnson & Johnson (the show’s original alternate sponsor). Based on the expiration date of November 30th, 1961, this was from the 1961-1962 season, The Donna Reed Show‘s fourth.