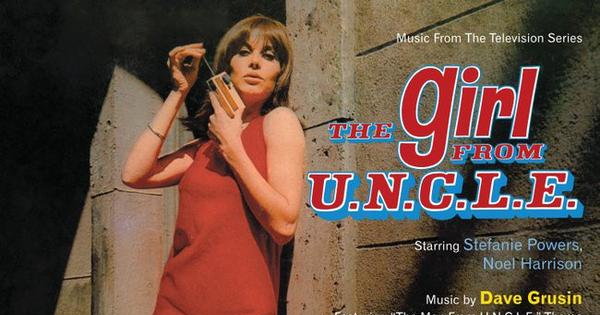 In the interest of full disclosure I should mention that I was sent a promotional copy of The Girl From U.N.C.L.E. soundtrack by Varase Sarabande as a “thank you” for helping them. To be honest, I’m not sure I was all that much help. I was contacted by the company to see if I could help provide memorabilia for use in the booklet.

Although I’m a big fan of The Girl From U.N.C.L.E. (you can read the article I wrote about the series here) I personally don’t own any memorabilia aside from two copies of one of the tie-in novels written for the series. I did put a notice up at Television Obscurities but I don’t know if anyone contacted Varese Sarabande. Nevertheless, I was sent a copy of the soundtrack.

And I’m really glad I was because now I do have a bit of memorabilia from The Girl From U.N.C.L.E. The soundtrack was originally released in 1967 on vinyl and as far as I know this is the first time it has been reissued and certainly the first time it has appeared on CD. The original liner notes are included in the booklet that comes with the CD. The soundtrack has twelve tracks, the bulk composed by Dave Grusin with two tracks each composed by Richard Shores and Teddy Randazzo. The theme from The Man From U.N.C.L.E., composed by Jerry Goldsmith, was also used for The Girl From U.N.C.L.E., and is included as well.

The version of the theme on the CD runs 1:34 as opposed to the roughly thirty second version heard during the opening credits to The Girl From U.N.C.L.E. It might be slightly more orchestral than the television version but I’m not an expert. I’m also not much of an audiophile. I don’t own an iPod. I’m still using my old portable CD player. So I can’t speak to the fidelity or timbre of the music. I can say that it sounded fantastic to me.

All of the tracks are vintage Sixties. If you don’t recall what music sounded like in the 1960s–or like me weren’t around then–think about the swinging, hip music used in the Austin Powers movies. That will give you a decent understanding. It’s wonderful period music, with plenty of horns and soaring vocalization that is really quite pleasant, especially on Track #4 (“April”) and Track #10 (“The Countess”).

While listening to Track #8 – “Sneaky Search” I couldn’t help but picture poor April Dancer being chased by a gorilla. That never happened in The Girl From U.N.C.L.E. as far as I know, although there was a gorilla in an episode of The Man From U.N.C.L.E.

One Reply to “Review: The Girl From U.N.C.L.E. Soundtrack”