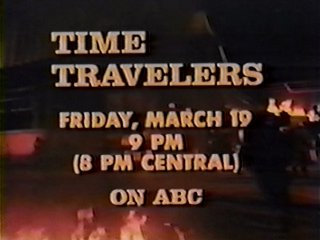 This 90-minute made-for-TV movie was the brainchild of Irwin Allen, the man responsible for Lost in Space, Land of the Giants, and other sci-fi shows from the 1960s. It aired on ABC on Friday, March 19th, 1976. Sam Groom and Tom Hallick starred as scientists sent back in time to find the cure for a deadly disease.

Time Travelers was included as an extra on the Season 1, Volume 2 DVD release of another Irwin Allen series, The Time Tunnel.