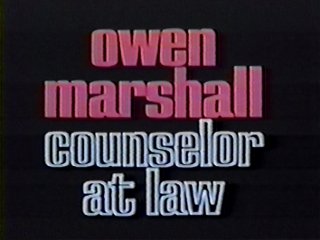 Before he was Colt Seavers on The Fall Guy, before he was Steven Austin in The Six Million Dollar Man, and after spending four seasons as Heath Barkley on The Big Valley, Lee Majors had a supporting role on ABC’s Owen Marshall: Counselor at Law. He played Jess Brandon, a young lawyer working with the title character, Owen Marshall (Arthur Hill). The pilot telefilm aired on Sunday, September 12th, 1971 (as part of the ABC Sunday Night Movie) and on Thursday, September 16th, 1971 the series proper premiered.

In 1973, while still appearing on Owen Marshall: Counselor at Law, Lee Majors took on the role of Steve Austin for ABC’s series of “The Six Million Dollar Man” telefilms, the first of which was broadcast on Wednesday, March 7th, 1973. When The Six Million Dollar Man was picked up as a mid-season replacement in November of 1973, Majors left Owen Marshall: Counselor at Law. He was replaced by David Soul. The series was canceled at the end of the 1973-1974 season, its third.