An early draft of my Programs Cancelled Before They Aired article included a discussion of shows that were announced as part of a network’s schedule but then dropped before making it past the pilot stage. Eventually I decided to cut this section because it made the article even longer without adding all that much to the topic. But I didn’t want to totally toss out such interesting information. So, from time to time, I’ll be writing about pilots that Almost But Not Quite made it to full-fledged status as television shows.

In early May of 1977 when NBC unveiled its 1977-1978 schedule, a sitcom titled Off the Wall, about a coed college dormitory at Ohio Western was given the Sunday 8-8:30PM time slot but wouldn’t start until six weeks into the season due to two-hour installments of The Wonderful World of Disney [1]. Todd Susman would star as the dorm’s resident adviser. Frank O’Brien, Sandy Helberg and Harry Gold would play students and Hal Williams would appear the dorm’s male cook, nicknamed Mother.

The pilot was broadcast on Saturday, May 7th from 8-8:30PM (followed by the pilot for Quark) and dealt with an attempt by Mother to alter the dorm’s regular menus. Cecil Smith of The Los Angeles Times called it “mildly funny with the usual jokes in the usual places” [2]. He noted that Off the Wall was produced by Franklin Barton for Universal Television, written by Neil Rosen and George Tricker and directed by Bob La Hendro. 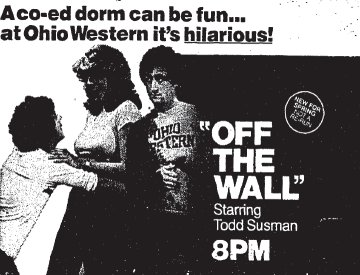 The pilot ranked dead last in the Nielsen ratings for the week (63rd out of 63 programs) [3]. Soon thereafter the network announced it was dropping the series from its schedule. Said NBC programming vice president John J. McMahon: “I’m not making any excuses but when we looked at it and examined it, we did not think it had that great a chance and we thought we could do better. It’s better to come to that decision now than later” [4].

Off the Wall wasn’t replaced by a new sitcom. Instead, NBC filled the 8-9PM time slot either with expanded episodes of The Wonderful World of Disney or special programming (CPO Sharkey, which was supposed to fill the 8:30-9PM time slot, was shifted to Fridays). For McMahon, dropping Off the Wall wasn’t the sign of a weak schedule. “We’re admitting to a mistake but at the same time I think we were bright enough and courageous enough to take our lumps and get out early” [5].

Off the Wall never made it past the pilot stage. Additional episodes were never filmed, although they may have been scripted or at least in the planning stages when the plug was pulled. Thus, it isn’t really an example of a program that was cancelled before it premiered. It never made it that far. In August of 1977, looking back, NBC’s programming vice president Paul Klein (apparently the network had several) gave the following explanation for pulling the series: “Television programming is like a supermarket. You get your wagon and you walk down the aisles and you take what you like. Somebody put ‘Off the Wall’ into my basket by mistake. It wasn’t until I got to the checkout counter that I noticed what I had” [6].

Now that’s what I’d call off the wall.

One Reply to “Almost But Not Quite: Off the Wall”