On Monday, November 29th, 1948 the ABC network broadcast the opening performance of the Metropolitan Opera Association’s 1948-1949 season. Verdi’s Otello, with Ramon Vinay as Otello, Leonard Warren as Iago and Licia Albanese as Desdemona, ran from 8-11PM. Fritz Busch conducted the performance [1]. The Texas Company sponsored the broadcast and Milton Cross served as commentator. Announcing the broadcast on November 25th, ABC’s president, Mark Woods, noted that “we must regard the task as an experiment, attempted with the full realization of the hazards involve” [2]. 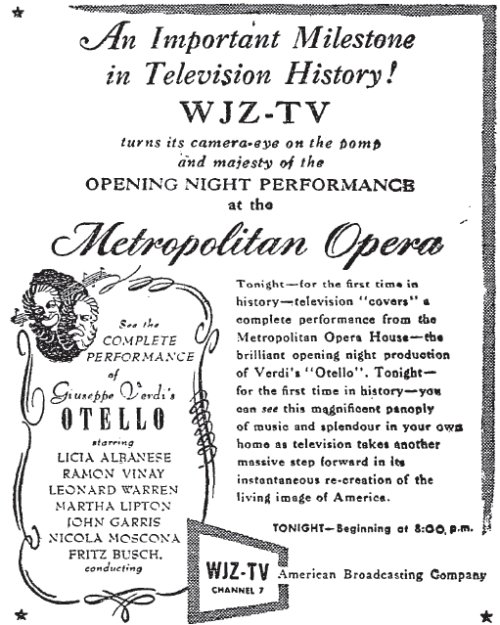 The broadcast, which used “specially devised infra-red lighting,” was carried by at least five stations in New York City (on WJZ-TV), Washington, D.C., Philadelphia, Boston and Baltimore [3]. Jack Gould, reviewing the broadcast, called it “an exciting and rewarding achievement” that demonstrated “a new and arresting quality of intimacy” [4]. But he also pointed out the problems involved in the effort:

Since the video production could not benefit from many special preparations without interfering with the performance for the audience at the Metropolitan, compromises had to be made. The lighting was often erratic and given to extremes of brightness or darkness. The distant “shots” from the back of the house also reduced the principals on stage to microscopic proportions.

In the last act, the camera work reached perhaps its greatest proficiency, chiefly because the action on the stage was not diffused over the large stage but centered on Desdemona’s bed. Her solo rendition of the “Ave Maria” at her prayer bench was an exceptionally moving visual cameo.

The weakness in the excessive use of distant “shots” was most vividly exemplified in the third act, when Iago takes Desdemona’s handkerchief from Cassio and waves it so that Otello may see it. The scene demanded a close view but, through lack of alertness on the part of the video director, the handkerchief could hardly be seen at all in the view shown. [5]

Howard Taubman called the broadcast “remarkably successful for a first try” and reported that viewers were able to see “much of the quality of the show” on their television sets [6]. “More than the performance itself,” he wrote, “the telecast brought into people’s homes views of the stagehands at work mounting new scenes in the intermissions, interviews with celebrities and, on the whole, a more intimate contact with aspects of an evening at the opera than a good many people got in the theatre” [7].

In attendance at the opera was President Truman’s daughter, Margaret, who was called “the star of the audience” despite arriving after the first act had begun [8]. In New York City, WJZ-TV’s broadcast of the opera drew a 42.3 Hooper rating from 8-10:45PM which was higher than the combined rating for all the other stations in the city [9]. No known copy of the broadcast exists although photographs taken from television screens do. The performance may been simulcast on radio.