When the National Broadcasting Company began regularly scheduled broadcasts using its experimental (non-commercial) station W2XBS in New York City on April 30th, 1939, the bulk of its broadcasts consisted of live telecasts from the New York World’s Fair. Within a few months, however, W2XBS was broadcasting one or two live dramas each week, along with sporting events, interviews, sketches and news, song and documentary programs, plus lots of films.

The dramas, typically an hour in length, were either original productions or adaptations of famous novels and plays. The New York Times reported on April 30th that radio scriptwriter Jack Hasty had been hired by NBC to pen shooting scripts for television [1]. How many of his scripts were later used by W2XBS is unknown.

What follows is a list of some of the dramas broadcast by WX2BS in 1939. It is not a complete list and is drawn from television listings in The New York Times. Note that the dramas were usually shown on Tuesdays and Thursday until late October when they began airing on Fridays. I have no idea if there was a title for this series of dramatic plays. 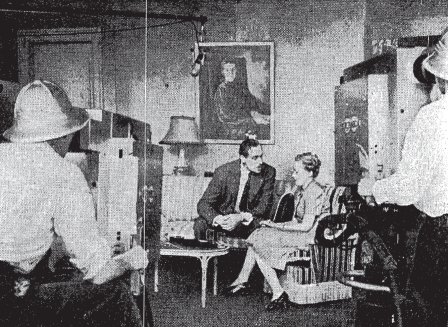 On July 23rd, 1939 The New York Times declared that “those who look in seem to be in general agreement that television’s three hit shows on the New York air to date have been one-hour dramas: “The Donovan Affair,” by Owen Davis; “Confessional,” by Percival Wilde, and E.B. Ginty’s “Missouri Legend,” featuring Jesse James” [2]. A review of “Dulcy” (originally broadcast Tuesday, August 29th, 1939) called the play “an amusing telecast” that “proved beyond all doubt that drama is one of television’s aces” [3].

But memory and good acting are not all of the qualifications; television gives more intimate views of the players. There are no footlights between the actors and the audience. The camera takes the audience right up on the stage. So the players must look their part; they must be telegenic, and that was another fature which made “Dulcy” by television a most successful show.

Never did the actors seem to be conscious of the devices that were suspended over them and peering at them to pick up every sound and move. If they made a mistake or had a slip of the tongue, they knew how to pass it by or quickly gloss it over in true theatrical style. [4]

Perhaps the most interesting aspect of the review was the following sentence: “Any idea that blondes do not televise was dispelled completely by Miss [Helen] Claire and Katharine Stevens, who as “Angela” added to the attractiveness of the telescenes” [5].

Less well received was “The Butter and Egg Man” (originally broadcast Tuesday, October 3rd, 1939). The New York Times noted the play “did not show up television to good advantage” and complained that “in the picture pick-ups one camera had a weak ‘eye.’ Half of the performers appeared light-struck, while the pictures flashed by the good ‘eye’ were sharp and clear” [6].

Bold enough to attempt a telecast of Robert Louis Stevenson’s “Treasure Island,” the showmen at Radio City hit a low in production. It was too much for them; the action too scattered for the limited settings of the pill-box studio. The romance sailed off into space as one of the most amateurish telecasts so far. The “Hispaniola” struck a shoal of errors. [7]

Near the end of the year The New York Times called “Three Men on a Horse” (originally broadcast Friday, November 24th, 1939) “the most entertaining play to date” [8]. From the review:

Already television can follow one rule and play safe: if the show has been a hit on the stage and screen and is properly adapted for telecasting it will be a hit on the air. That is why the farce “Three Men on a Horse” scored. Here was an exhilarating story dramatized by a cast of three to five actors on the screen at a time, which is ideal for television.

The telecameras are like a microscope on acting: they so easily and intimately detect the professional or amateurish touch. “Three Men on a Horse” was a professional job well handled by a telegenic troupe. And another factor in the production’s favor was that it was on the air a little short of an hour, broken up by two or three brief intermissions to give the eyes respite. [9]

W2XBS continued airing dramatic plays through July of 1940 when the station temporarily went off the air. I’ll discuss the 1940 plays at a later date.