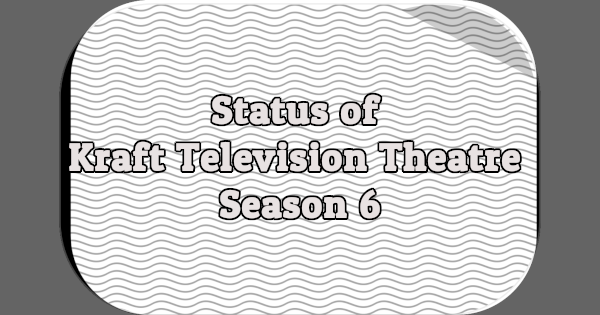 Season 6 of Kraft Television Theatre premiered on October 1952 and ended in August 1953. This was a change from earlier seasons, which all ran from September to September (except for the first season, which ran from May 1947 to September 1948). The series was pre-empted on Wednesday, June 3rd, 1953 for a speech by President Eisenhower which ran from 9:30-10PM. To fill out the 9-10PM hour, NBC broadcast an episode of My Son Jeep from 9-9:30PM. NBC broadcast 47 episodes during the 1952-1953 season, of which at least 16 exist.

A special “Sixth Anniversary Show” aired on May 6th, 1953. It featured segments from four earlier episodes recreated with their original stars:

Why was one of the segments from an episode broadcast only months before the anniversary show itself? Perhaps because “My Brother’s Keeper” was the 300th episode of the series. At least that’s according to the announcement at the start of the episode:

“Good evening. This is Ed Herlihy speaking for the Kraft Foods Company, makers of the world’s favorite cheese, who bring you each week all year long a fine play with a fine cast, on the Kraft Television Theatre. Tonight we present the 300th play in this Wednesday evening series: ‘My Brother’s Keeper,’ by George Roy Hill.”

Based on TV listings drawn from The New York Times and other newspapers, however, “My Brother’s Keeper” was actually the 302nd episode of Kraft Television Theatre. According to The Classic TV Archive it was the 303rd episode.

The Library of Congress (LOC) has 14 episodes from this season in its collection. The Paley Center for Media (Paley) has three complete episodes and portions of two others. The UCLA Film & Television Archive (UCLA) has two episodes. Both the Museum of Broadcast Communications (MBC) and the Peabody Awards Collection (Peabody) each have one episode. Together, these five institutions have copies of 16 different episodes.

Keep in mind that just because the big TV archives/museums only have certain episodes doesn’t mean there aren’t additional episodes of Kraft Television Theatre from the 1952-1953 season out there somewhere.