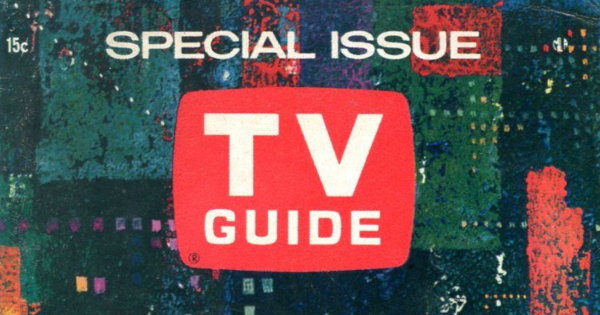 The 1964 Fall Preview issue of TV Guide is of course the appropriate place for me to kick off my A Year in TV Guide project but it is definitely an atypical issue. There were no articles this week. Instead, the issue focused almost entirely on previewing the new fall fare on the networks. 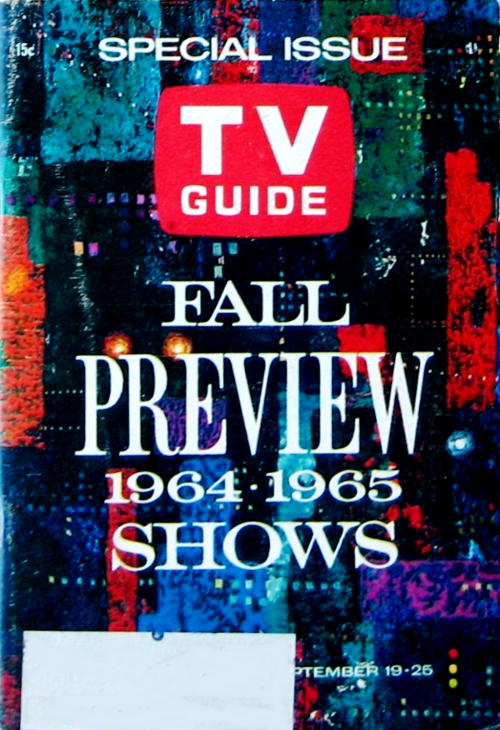 From its inception in 1953 until its October 2005 reformatting, TV Guide published dozens of regional editions, as many as 140 at one point. Each issue featured both a color, glossy national section consisting of articles as well as a black-and-white, paper section containing TV listings for each region. This issue, and most of my 1964-1965 collection, is the Western New England Edition covering Connecticut, Rhode Island and parts of Massachusetts.

Those not familiar with TV Guide may not know that its listings ran from Saturday to Friday and therefore didn’t directly correspond with the Nielsen rating period which ran Monday to Sunday. The 1964-1965 season officially began on Monday, September 14th. The listings in this issue therefore covered most of the second week of the season, which would be included in the first two-week Nielsen NTI report out in October.

Sadly, my copy of this issue is missing its front and back covers, so the special chart published on the inside back cover is long gone. I wonder if it was torn off so the chart could be used. Thankfully, I found a pretty good picture of the front cover on eBay at some point.

An editorial at the start of the issue noted that the networks were focusing on comedies in the new season. There were 35 new shows being introduced and 22 of them were comedies. In all, of the 96 network shows, just under half would be comedies. The networks and advertisers liked comedies because they were safe. They regularly drew big audiences and had done so for years. “Unfortunately,” said TV Guide, “no great achievements have ever come from playing it safe, and no great achievements are being chalked up by the networks in programming innovations this season.”

Among the new comedies being added to the network schedules were Gilligan’s Island (CBS), Broadside (ABC), Many Happy Returns (CBS), Bewitched (ABC), The Tycoon (ABC), Mickey (ABC), The Munsters (CBS), The Addams Family (ABC), Gomer Pyle, U.S.M.C. (CBS), and the three segments of 90 Bristol Court: Karen, Harris Against the World, and Tom, Dick and Mary (all NBC). Some turned out to be huge hits. Others were moderately successful. Still others were flops. 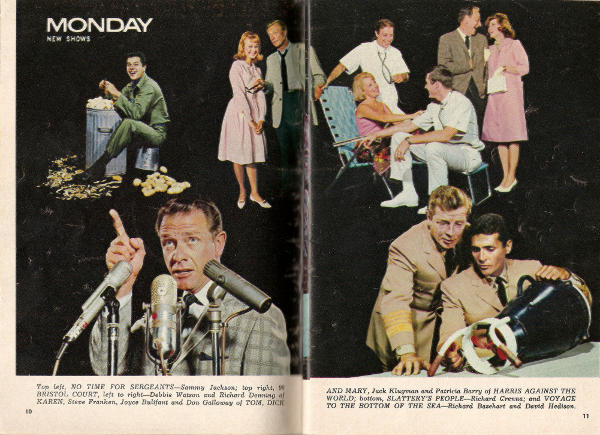 I really don’t like the way the cast photos are presented in this particular Fall Preview issue. All of the photos for each night of the week are squished together in collages spread across one, two, or three pages with the descriptions on separate pages. The photo pages are visually interesting but they are also crowded and some cases the photos for different shows overlap. You have to keep flipping back to the photos while reading the show descriptions if you’re not familiar with the cast. It’s not ideal.

The new shows are described briefly and for the most part without any commentary, critical or otherwise. The situations are laid out, the cast and characters listed, and little else. Flipper has “a warm, simple premise.” My Living Doll “could not have been better named.” As an example, here’s the summary for Gilligan’s Island:

Gilligan’s Island deals with the misadventures of a vacationing fishing party that becomes marooned when its charter boat, the “Minnow,” is wrecked on an uninhabited island. Gilligan (Bob Denver), lovable but incompetent “mate and crew,” and the captain (Alan Hale), lead an improbable expedition or two, like putting together a raft and finding some surprising head-hunters who aren’t head-hunters. Curvy movie-star Ginger (Tina Louise) is romantically interested in “the professor,” an unworldly (his specialty is dull metals) high school science teacher, who had been at work on a book called “Rust: the Real Red Menace.” Jim Backus and Natalie Schafer insist on maintaining their high-society way of life From a seemingly bottomless suitcase they can produce anything from polo clothes to a dress suite. Debut: CBS, Sept. 26.

Described in brief are syndicated offerings, including those from National Educational TV, network specials like seven new Perry Como programs on NBC and Inger Stevens touring Sweden on ABC to Miss Teen-Age America on CBS and six United Nations dramas on ABC and NBC, from the likes of Alfred Hitchcock and Rod Serling.

Given how little special programming the networks air these days other than the occasional awards ceremony, it’s astounding to think of what viewers had to chose from during the 1964-1965 season. CBS Reports on alternating Wednesdays as well as NBC White Papers and David Brinkley’s Journal sprinkled through the year. ABC had a four-part documentary series called The Daring Americans about helicopter pilots and Peace Corps members, among other topics, plus three historical documentaries under the umbrella title Saga of Courage, focusing on Leonardo Da Vinci, General Custer and Robert Falcon Scott.

Sports gets its own page, too: the 1964 Olympics in Tokyo as well as 95 NFL games on CBS and 3 AFL games on ABC, plus baseball, basketball, golf, bowling, horse racing, and more. New daytime TV was primarily Saturday morning cartoons, including Hoppity Hooper, Mister Mayor, Shenanigans, and Underdog. The only new daytime soap was The Young Marrieds on ABC.

The Letters page, also in the listings section, included notes from three readers upset that “The Nuthouse” on CBS would not be a continuing series as well as one letter from a viewer who called it a new low for television. Also, a letter in support of Newton Minow’s September 5th editorial on the future of television, another agreeing with TV Guide‘s review of the political conventions, and one taking issue with an August 29th reference to NAFBRAT (the National Association For Better Radio and Television) as little old ladies.

Because this is the 1964 Fall Preview issue, the listings section is chock full of advertisements for new and returning programs on all the networks. They range from quarter-page ads (mostly for ABC) promoting individual programs to half and full-page ads for nightly line-ups. I really like NBC’s full-page ads, with sketched artwork that really draws the eye. ABC’s full-page ads, by comparison, are a bit messy with pictures of various sizes. Its ad for Wednesday asks viewers to sit back and relax with ABC: to Laugh with Ozzie and Harriet, Giggle with The Patty Duke Show, Cool It with Shindig, Break Up with Mickey, and Ogle with Burke’s Law. 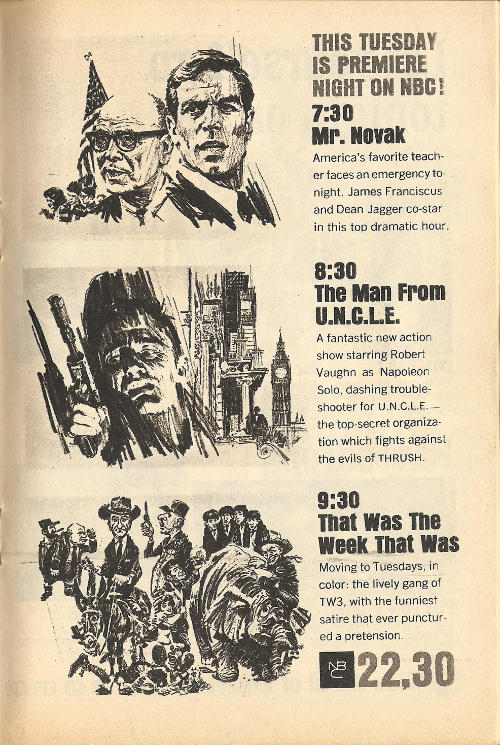 New shows premiering during the week included Flipper, Broadside, Slattery’s People, The Munsters, The Baileys of Balboa, and The Reporter. Shows going off the air included Captain Kangaroo, Sing Along with Mitch, and CBS Sports Spectacular.

There are of course plenty of shows being aired in syndication, ranging from The Rebel and The Honeymooners to Private Secretary (under the syndicated title Susie) and I’m Dickens, He’s Fenster.

The number of sporting events on the air on Saturday is astounding: candlepin bowling; an NBC Sports Special covering the America’s Cup race; championship wrestling; the 35th annual National U.S. Open Volleyball Championships on CBS Sports Spectacular; a college football game between Navy and Penn State (in color) two baseball games (Kansas City Athletics vs. the Yankees and the Minnesota Twins vs. the Red Sox); Canadian pro football; an NFL Countdown; Olympic trial; championship bowling; World of Sports on ABC with auto and yacht racing; a horse race; highlights of Patriots football; and a football preview. Just keeping track of it all was practically a sporting event of its own.

Connecticut’s WHCT-TV (Channel 18) was an independent station participating in the Zenith Radio Company’s Phonevision pay television experiment. Here are some of the movies available for purchase during the week:

Local programming is difficult to identify because I’m not familiar enough with the local stations or what may have been on the networks during the daytime or available nationally or regionally in syndication. For example, at 12:30PM on Sunday, September 20th WTIC-TV (Channel 3) in Connecticut, the state’s CBS affiliate, aired a half-hour program called We Believe, identified in the listings as a religious program. The episode title was “Salvation Army in Hartford” which certainly sounds local but the same series aired on WHDH-TV (Channel 5) out of Boston later in the week, another CBS affiliate.

Ranger Andy, a half-hour kid’s show aired on WTIC-TV at 4PM Monday through Friday was definitely a local show, as was Today in Connecticut, a half-hour weekday morning show airing on WHNB-TV (Channels 30 and 79), Connecticut’s NBC affiliate. Due to the numerous network ads for new and returning shows, there were absolutely no local ads in this issue. Hopefully later issues will make it easier to pick out local programming.

That wraps up this first installment of A Year in TV Guide. Hit the comments with your thoughts or suggestions about what you’d like to see in the future each week.