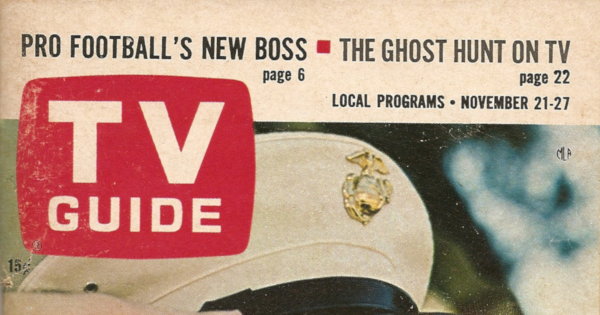 On the Cover: Jim Nabors of Gomer Pyle, U.S.M.C. on CBS (photograph by Gene Trindl).

The national section this week is relatively underwhelming. There’s no mention of the anniversary of President Kennedy’s assassination whatsoever, which surprised me. Instead, the As We See It editorial discussed complaints from the broadcasting industry about Howard H. Bell, the man in charge of enforcing the Radio and Television Code of the National Association of Broadcasters. He announced that he would start publishing a monthly list of stations that broke ran afoul of the code (by airing too many commercials, for example).

Previously, stations that broke the code were kicked out and not allowed to display the Seal of Good Practice. Apparently, some in the broadcasting world were of the opinion that publicly shaming stations was too much. Not TV Guide, which ended its editorial by writing “Give ’em hell, Bell.” 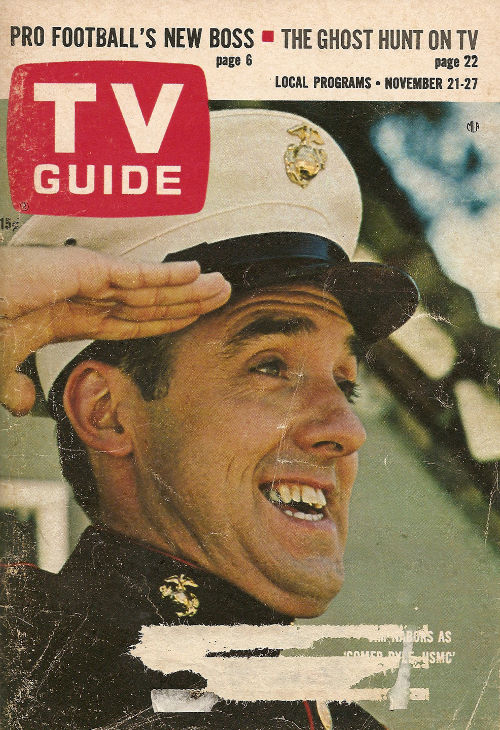 There are four articles this week. “CBS Calls the Signals” by Arnold Hano is another article about sports on television but one that I actually found interesting. In it, Hano explores how CBS has forced the National Football League, players, coaches, and broadcasters to make changes so games will be more exciting on television. The network paid $28.2 million dollars in January 1964 to air NFL games for two years. In September, CBS gathered NFL broadcasters and production crews from the 14 NFL cities and laid down the law. Announcers were told not to talk when quarterbacks gave instruction on the scrimmage line. Announcers were also told that CBS preferred they switch off every half hour rather than every quarter hour.

When the season kicked off, CBS had two play-by-play announcers in the broadcast booth and two color commentators on the sidelines, rather than one of each in the booth. The network hoped the sideline announcers would gather interesting tidbits from players and coaches and relay that information to viewers. It didn’t work. There were often technical difficulties that led to dead air. CBS then wanted game officials to explain their rulings during time outs, which the NFL didn’t like. CBS insisted. CBS also wanted the scoreboard clock to be considered official so viewers could always know how much time was left in the game. The NFL said it wasn’t accurate enough but according to Hano, CBS would probably get its way. These days the networks will do anything and pay anything for the opportunity to air football games.

(Does anyone remember watching some of these CBS games? How did they come across to viewers at home? And did CBS get its way about the scoreboard clock?)

“Dear Frayands” by Les Raddatz is a bizarre article about Jim Nabors, described as an open letter to his friends back home in Sylacauga, Alabama. Raddatz attempted to write with a Southern drawl, which makes for rather painful reading. Here’s an excerpt:

Jim hat on the Marine’s unyform he warrs on the TV, but septin fer thayut, he’s jayust the same ole boy he useter be down home–frenly an smilin an full o’ fun. Why, to show how frenly he is, they was this lil ole lady–Hedder Hopper?–at the porty, an Jim treated her jayust as nahse as any o’ the purty gals theyer, dogged if he ditten!

The most interesting thing to come out of this was the revelation that Nabors had a sandwich named after him at the studio commissary, as did Danny Thomas, Andy Griffith, and Dick Van Dyke. But the Jim Nabors sandwich — which included corn beef, pastrami, coleslaw, and Thousand Island dressing — used to be a sandwich named for someone from I’m Dickens, He’s Fenster (so either John Astin or Marty Ingels).

“TV’s Button-Down Actor” is a profile of actor Edward Andrews, co-star of ABC’s Broadside, whose career in television started in the late 1940s when television was live. He felt television had changed since those days and some of the fun had gone out of it. He also revealed he was a big fan of books and boats and the sea.

Finally, there’s “The Great Ghost Hunt of ’64” by Robert Musel, an article about Margaret Rutherford and the NBC special “The Stately Ghosts of England” which she hosted. In it, she explores three homes in England said to be haunted: Longleat, Beaulieu, and Salisbury Hall. There were all sorts of mysterious accidents and incidents, ranging from lights falling over or exploding to a cameraman suddenly losing his hearing while in a particular room only to get it back when he walked out of it. [The color special aired on Monday, January 25th, 1965 from 10-11PM.]

Unlike last week’s review of Slattery’s People, Cleveland Amory’s review of 90 Bristol Court this week was anything but effusively positive:

…the plain fact is that running three none-too-original and all-too-similar half-hour shows into one hour-and-a-half total not only doesn’t make a good three-act comedy, it doesn’t even let you fully appreciate the occasional half hour that is good. None of the three shows is, by itself, terrible; but, with the exception of the middle one–Harris Against the World, which can be very funny–neither are they, on the average, strong enough to do anything more than grin and bore you.

However, Amory praised Jack Klugman’s performance in Harris Against the World, which was the only one of the three sitcoms he could recommend.

Rounding out the national section was a crossword puzzle, another fashion spread, this one featuring actress Viveca Lindfors wearing clothes designed by Eric Lund, and a picture feature showcasing the newspaper “city room” set from The Reporters, featuring $50,000-$70,000 worth of furniture from the actual offices of the defunct New York Mirror.

Again there were only two news reports in the “For the Record” column this week, one very lengthy and the second just two paragraphs:

Lots of great tidbits in the Hollywood and New York TV Teletype columns this issue:

The letters page was a mixed bag, with three writers criticizing A.C. Nielsen’s November 7th article defending his company’s Nielsen ratings. One of them noted the irony of the issue also featuring an article about actor Michael Burns, whose series It’s a Man’s World was cancelled due to low ratings. There were also four letters reacting to network election coverage:

A pat on the back for all three networks for the superb election coverage. We switched from one to another and they were all excellent.
Mrs. C. Sebley
Iowa City, Iowa

I was completely disgusted with the NBC coverage of election returns. With only 2 percent of the popular vote in, and half the country still voting, the projected votes of the RCA computers had the election over and definitely decided.
(Name withheld)
St. Clairsville, Ohio

I was pleased to see good old Walter Cronkite back at the helm.
Jane Allen
Oakland, Cal.

The final letter was from another reader who, after admitting to being a 1942 Sinatra fan, wondered why “poor talentless eye-rolling Beatle-type groups” need to appear on television in prime time.

Although TV Guide didn’t mark the 1st anniversary of President Kennedy’s assassination, the networks did. CBS, which on November 18th had broadcast an hour-long news special about the late president, aired another hour-long special on Sunday, November 22nd from 11:30AM-12:30PM. “Four Dark Days” was a review of the four days following the assassination, including films of public reactions, Kennedy’s funeral, and his burial. ABC and NBC both scheduled their hour-long specials from 6:30-7:30PM. ABC’s “John F. Kennedy: His Two Worlds” featured a mix of Kennedy family films and films of the President at work. NBC’s “John F. Kennedy Remembered” was a review of Kennedy’s time in the White House, with NBC correspondents recalling the high points of his Presidential career. The Ed Sullivan Show on CBS also included a tribute to Kennedy: Irish singers from County Wexford singing “The Boys of Wexford” and “kelly, the Boy from Killane.”

There were many other Kennedy tributes and specials airing on the networks and local stations. On Saturday, November 21st WNHC-TV (Channel 8) aired an hour-long special hosted by Stelio Salmona called “Four Days in November,” featuring film of Kennedy in Connecticut. That same day WHDH-TV (Channel 5) aired a half-hour film called “A Thousand Days” that was produced for the 1964 Democratic National Convention, with Richard Basehart narrating. On Sunday there were specials all over the place: a memorial mass live from the Cathedral of the Holy Cross in Boston on WNAC-TV (Channel 7) at 10AM; an installment of Comments and People on WNHC-TV (Channel 8) with guest Peter Phillippse, who painted Kennedy’s portrait, at 12PM; a local tribute on WHDH-TV (Channel 5) at 1PM; an episode of ABC’s Directions ’65 featuring recorded words of Kennedy at 1PM; “The Last Full Measure of Devotion,” an hour-long tribute to Abraham Lincoln, Franklin D. Roosevelt, and John F. Kennedy, on WNHC-TV (Channel 8) at 2:30PM; a special featuring interview excerpts on WHYN-TV (Channel 40) at 2:30PM; and NBC’s Sunday at 4PM, with host Frank Blair, was dedicated to Kennedy.

The week was filled with other specials. ABC aired another installment of The Jo Stafford Show on Saturday, November 21st at 9:30PM, with guest Peter Lawford. NBC had a Thanksgiving show on The Bell Telephone Hour live in color on Tuesday, November 24th, with Andre Previn, Earl Wrightson, Lois Hunt, and others. Both CBS and NBC had parade coverage on Thanksgiving. NBC also had “Your All-Time Favorite Songs” at 7:30PM on Thanksgiving, with Dean martin, Eydie Gorme, and Al Hirt, and “NBC Follies of 1965” on Friday, November 27th at 10PM, with host Steve Lawrence. 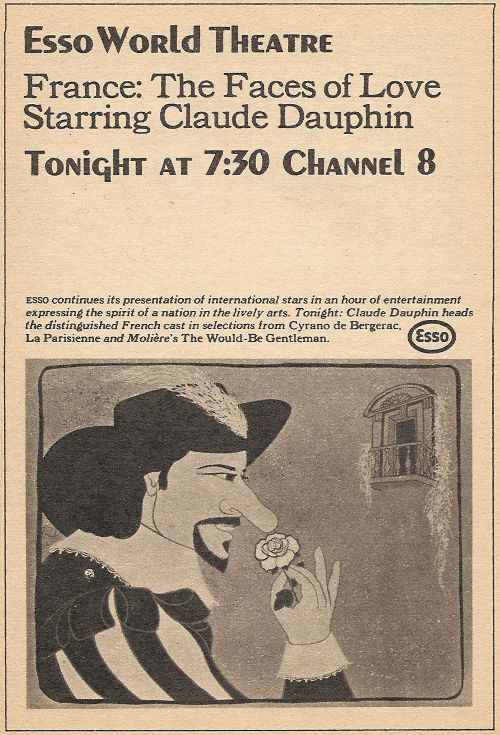 With this issue, TV Guide started publishing descriptions for Dateline Boston, the local series Boston’s WHDH-TV (Channel 5) aired live and in color from 6-6:25PM Monday through Friday. Here are the summaries for this week:

Tuesday, November 24th, 1964
“Readers Choice” takes a look at the latest developments in the publishing field. 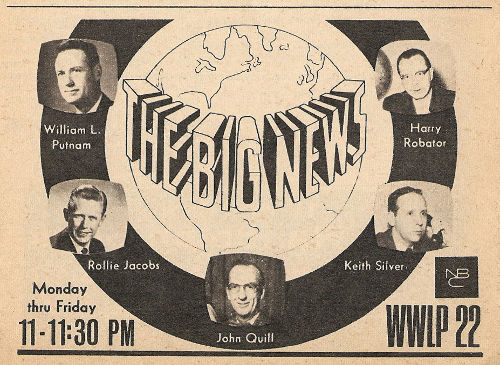