On the Cover: Sammy Jackson and Laurie Sibbald of ABC’s No Time for Sergeant (photo by Richard R. Hewett).

Another week, another issue of TV Guide, and another article about football. That’s right, TV Guide‘s obsession with pigskin continues with an article that, like last week’s look at the 1964 All-America football team, has little to do with television. Written by Leo V. Lyons, it’s a brief history of the National Football League, which dates back to around 1920. 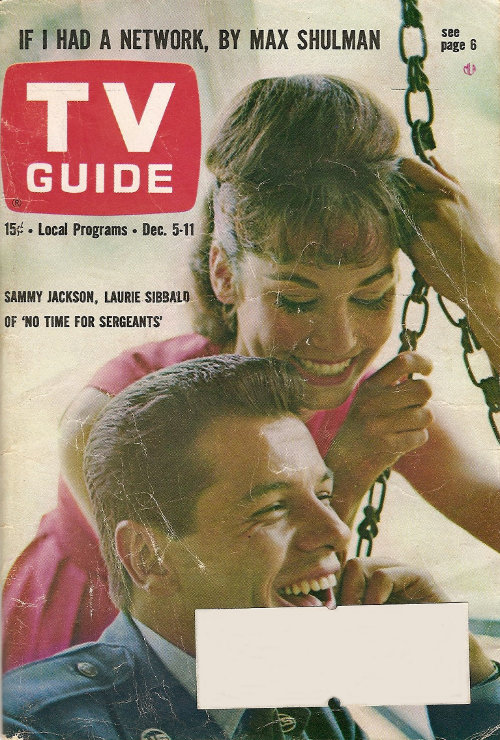 This issue also includes the first in a series of essays asking “prominent and articulate Americans” what they’d do if they were in charge of a TV network. The only requirements were that the network had to be competitive, make money, and work in the best interest of the public. This first essay is by Max Schulman, creator The Many Lives of Dobie Gillis, as well as author of numerous books. Schulman said he’d change nothing and do everything differently.

He wouldn’t change the percentage of the various kinds of programs on the air (Westerns, comedies, etc.) because that seems to be working. He would try to improve the caliber of programming by offering 100% ownership in shows to the most talented people he could find, something he insisted would result in better programs.

How can I make a profit by giving away the store? I’m glad you asked that question. I am not giving away the store. My store is a network. What I sell is time. When I get a good price for my time, I make a good profit for my network. If I corral TV’s best talent, it stands to reason I’ll end up with TV’s best shows. Which means I’ll capture TV’s biggest audience. Which means advertisers will be happy to pay me premium rates.

To solve the problem of low-rated public affairs programs, Shulman explained that he would convince the other networks to all run documentaries at the same time, basically forcing viewers to pick one and learn something. It might face some scrutiny from the Department of Justice, the networks would never agree to it, and independent stations would probably counter-program with movies, but he was certain it would work.

Also in this issue is an article about Sammy Jackson, star of ABC’s new sitcom No Time for Sergeants. He had a bit part in the movie version and became convinced he was perfect for the role of Will Stockdale. So, he wrote to producer Jack L. Warner and offered to hitchhike his way to an audition. Instead, he was sent airfare, auditioned, and got the role.

The final article is about Tina Louise, co-star of Gilligan’s Island on CBS. There’s not much of interest to Gilligan fans other than a brief discussion about changes made to the character of Ginger when Louise got the role and this tidbit about how nervous the network was about the gowns she’d be wearing:

In Gilligan’s Island, Tina isn’t asked to shed her raiment, but she is attired in a flesh-colored, figure-fitting evening gown (the one she was wearing at the time the boat went aground) which caused considerable consternation to the Program Practices Department of CBS.

To make sure there were no transparencies, the Program Practices expert led Tina from the studio to the street so that he could examine her in natural light. “Never,” she says, “have I undergone such a casing. I guess I passed the test, because the gown has remained in the show.”

I can’t imagine anyone at a network doing that these days.

Clevand Amory’s review of Gomer Pyle, U.S.M.C. in this issue is very positive. He calls Jim Nabors “as fine a comedian as your screen has mustered up this season” and also compliments Frank Sutton, whose Sergeant Carter served as the perfect foil to Gomer.

The “As We See It” editorial is pretty weak this issue, with no real focus. It starts off by noting the complaints about how TV and newspapers covered President Kennedy’s assassination and ends with vague support for a group working to increase pool coverage and keep reporters from influencing the stories they’re covering.

Rounding out the national section are two picture features. One is about NBC’s “Rudolph the Red-Nosed Reindeer” color special and its expensive Animagic. The other focuses on the National Surfing Championship, which is featured this week on ABC’s Wide World of Sports. There’s a hilarious picture of sportscaster Bill Flemming interviewing a bikini-clad surfer in the water while wearing a suit jacket, tie, and shorts. There’s also the usual crossword puzzle and a recipe for Flaming Christmas Pudding.

The “For the Record” column this week included four news reports:

From the Hollywood and New York TV Teletype columns:

The were some long letters this week, including one criticizing Cleveland Amory’s November 28th review of The Munsters and The Addams Family and an even longer response to a November 21st article about CBS and the NFL from a reader worried that football will join wrestling and boxing as sports on television that are less about competition and more about making money. There were two letters about NBC’s “The Louvre” special, one pointing out an error in TV Guide‘s picture feature about the special, the other from an appreciate reader who enjoyed watching the special.

Then there was this amazing letter:

Finally, there was another letter about Count Marco and a very short one from a reader who definitely didn’t like Les Crane: “We want LESS Crane.”

Airing this week for the very first time was “Rudolph the Red-Nosed Reindeer,” an installment of The General Electric Fantasy Hour on NBC. I had no idea the special originally aired outside of prime time from 5:30-6:30PM on Sunday, December 6th. In addition to a TV Guide close-up, the special received a picture feature elsewhere in the issue, and a full-page color advertisement taken out by GE: 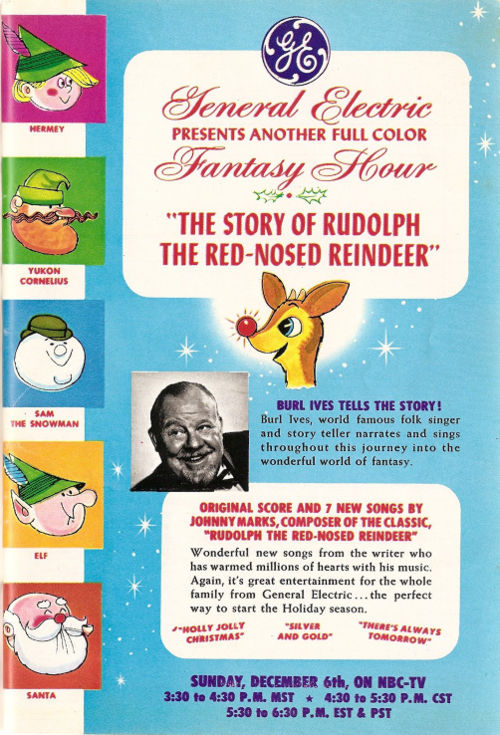 WTIC-TV (Channel 3) aired a half-hour panel discussion called From the College Campus on Sunday, December 6th from 11:30-12PM. It was held at Saint Joseph College in West Hartford, CT. WNHC-TV (Channel 8) aired a live basketball game in prime time on Saturday, December 5th from 8:30-10PM, pre-empting The Lawrence Welk Show and part of The Hollywood Palace, which was scheduled to be joined in progress at the conclusion of the game. The station also took out a half-page ad for the game, which pitted the University of Connecticut against Yale: 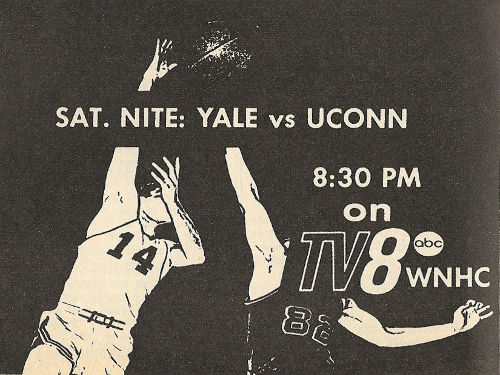