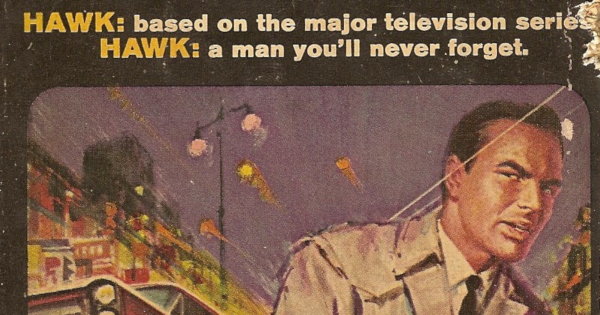 It’s been a few months since I’ve reviewed a tie-in novel. One of the main reasons I stopped my weekly Bookshelf feature back in 2010 was the fact that I was running out of tie-in novels to review. I have a large collection of such books but many are episode novelizations, which I don’t like reviewing if I’ve never seen the episode(s) being novelized. When I relaunched Bookshelf as a monthly feature last year I also decided I only wanted to review tie-in novels of relatively short-lived TV shows.

Hawk definitely fits the bill. It ran for just 17 episodes on ABC during the first few months of the 1966-1967 television season. The detective series starred Burt Reynolds as Lieutenant John Hawk, a full-blooded Indian (the Native American variety) working as an investigator for the New York City District Attorney. I’ve never seen the show so I can’t say how much it played up Hawk’s Native American roots but apparently he faced discrimination both on the job and off. 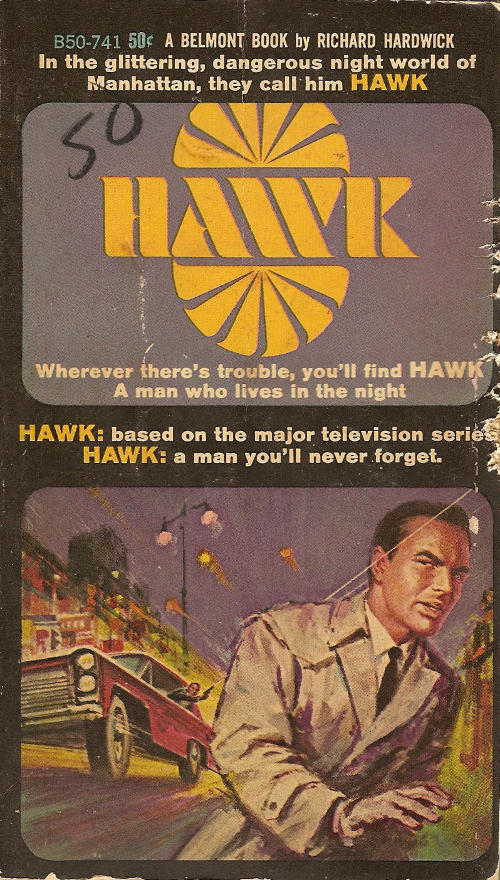 The novel Hawk doesn’t do much with the Native American angle. Hawk occasionally throws out an Iroquois saying and a few characters upon meeting him are shocked to learn he’s an Indian. There are also a handful of references to him moving silently like an Indian. Otherwise, the character is mostly defined by his direct, almost abrupt, manner and his love of the night. He works the night beat by choice, it seems, and doesn’t appear to be all that comfortable during the daytime.

The plot of the novel concerns a group trying to raise money to arm guerrillas and overthrow the government of the fictional Caribbean island of San Sebastian. They consider the current government illegitimate. It took control of the country via a coup several years earlier and the group wants a return to the good old days. Hawk gets involved after a car bomb explodes in a parking garage, killing a member of the group.

From the start it’s obvious that this isn’t going to be an easy case to solve. It’s not immediately clear who was killed in the bombing. Was the bomb set by someone working for the San Sebastian government, worried the group is raising too much money? Or was there a traitor within the group itself, someone perhaps more interested in money than revolution? Even as Hawk and his partner Detective Carter (played by Wayne Grice in the series) attempt to piece together the clues, other members of the group try to investigate on their own.

As the novel unfolds, Hawk learns that nearly $1 million in cash raised by the group was withdrawn from a bank using forged signatures. He tracks down the wealthy sister of the man supposedly killed in the bombing as well as his former (or current?) lover. There’s another murder as well, further complicating things. Hawk occasionally turns to his friend Sam Crown (played by John Marley in the TV series) for help. Sam was a bookie in Greenwich Village who also ran a newsstand and always had his ear to the ground and knew things nobody else did. 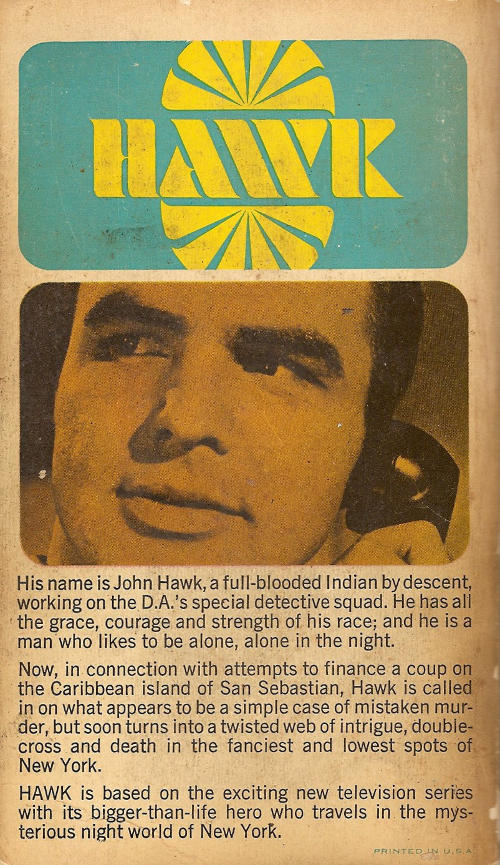 I really enjoyed Hawk. It was a short but intriguing read. I don’t want to give away too much of the story so I’ll only say that while the ending wasn’t a huge surprise, the twists and turns were more than enough to keep me turning the pages.

If this novel was an accurate representation of the TV series I can perhaps understand why it didn’t catch on. Hawk is a pretty bland character. He’s straightforward and direct but other than one or two random Iroquois references there’s really nothing special about him. He’s just another detective who happens to like the night life.

That said, this was probably written before the series premiered and author Richard Hardwick may not have actually seen any episodes. One of the characters in the TV series was Assistant District Attorney Murray Slaken (played by Bruce Glover). In the novel, however, his name is Murray Seigel, suggesting that Hardwick may have been working with early production material.

My copy of Hawk was purchased more than a decade ago as part of a much larger collection of TV tie-in novels. It unfortunately was one of a handful that were chewed on by mice or rats. You can see the damage on the right-hand side of the front cover. It’s not too bad. A few other books were much worse off.