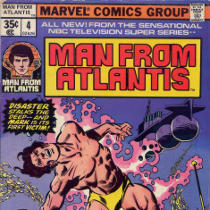 Although the cover screams “All New!,” this issue is actually adapted from the third made-for-TV movie (Killer Spores, broadcast by NBC on May 17th, 1977) that led to the short-lived weekly series. This is mentioned on the first page in a small bubble in the bottom left-hand corner: “Freely Adapted In Our Might Marvel Manner From The NBC-TV Series!” As the issue opens, Mark Harris is deep below the surface, followed by the submarine Cetacean, heading towards the Gamma Sig Space Probe that is embedded in the ocean floor. He hears a terrible sound, one that no one else can hear.

We then flash back to the launch of the probe and the news that the probe was falling back to earth only hours after entering Earth orbit. Six ounces of something has attached itself to the probe! The Cetacean and its crew are quickly dispatched to recover the probe. Back in the present, Mark is shocked when dozens of shimmering, glowing discs suddenly emerge from the probe and penetrate his body and mind. He is flooded with memories of events and people and a time he doesn’t recognize. As he boards the Cetacean, he also sees into the minds of Dr. Elizabeth Merrill and Dr. Miller Simon; Dr. Merrill is giving him a kiss on the cheek while Dr. Simon is upset after deciding to leave the Foundation for Oceanic Research 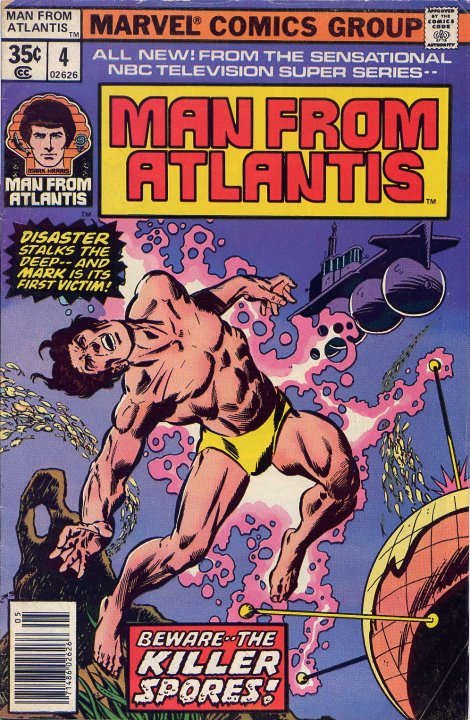 Mark soon makes his way to a laboratory, where he is able to show one of the spores to Dr. Merrill and Dr. Simon. He then uses something called the Alpha-Brainwave Projector to share his thoughts — and the thoughts of the spores — with the others. The spores have been separated from their apparently space-faring colony and want to return home. Sensing the hesitancy of the other doctors, the spores freak out and take complete control of Mark’s body, forcing him to rush from the Cetacean (which has returned to port) to a parking lot and steal a car. The only problem is that Mark can’t drive.

Before long, being away from water and in the hot desert sun has taken its toll on Mark. He can’t see very well, his skin is turning blue and he’s having trouble breathing. He soon crashes the car but, thankfully, Dr. Merrill and Dr. Simon show up in a helicopter and soon have him above the ocean. Revived, Mark convinces Dr. Merrill that the spores must be returned to their colony. Somehow, she convinces NASA to relaunch the Gamma Sig Space Probe. The spores leave Mark’s body and attach themselves to the probe, which is soon sent off into space. A happy Dr. Merrill gives Mark a kiss on the cheek, just like his vision. And then, Dr. Simon tells everyone he’s been reassigned and will be leaving the Foundation.

Once again, much of the issue is made up of advertisements. Of the 32 pages, 14 are advertisements or promotions for Marvel. One full-page ad is for the official Star Wars Fan Club; another is for a Secret Agent Spy Scope (only $3). The issue also features the first letters column for the comic (“Out of the Depths”) with four letters from fans of the television series and the comic. One mentions that the first issue of the comic had Dr. Merrill watching Mark through a window in the Cetacean while the television series involves an external monitor and view screen. Whoever answers the letters explains that the window was a better visual grab than an impersonal monitor screen.

Another letter addresses the artwork, complaining that the television Mark’s muscles are sleeker, his hair is brown (not black) and he swims like a dolphin without bubbles. The reply stated that the comments would be passed on to artist Frank Robbins but asks for patience because issue #6 is already being worked on. Of course, the series only ran for seven issues, so it seems unlikely that the artwork was ever influenced by letters from fans.