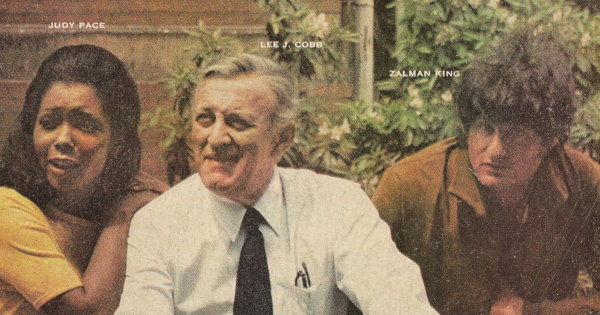 Dell published two comic books based on ABC’s legal drama The Young Lawyers, which premiered in September 1970. The first issue is dated January 1971, which means it was likely on newsstands in November 1970. I don’t own that issue but I did pick up a copy of the second issue last year at a local comic book store. It’s dated April 1971, so it was probably on sale in March of that year.

The Young Lawyers starred Lee J. Cobb as David Barrett, an experienced lawyer who oversaw the Neighborhood Law Office (NLO), a legal aid outfit in Boston. Zalman King and Judy Pace co-starred as law students Aaron Silverman and Pat Walters. I’ve only seen part of an episode of The Young Lawyers so I can’t say how well the characters in the comic match their TV counterparts. 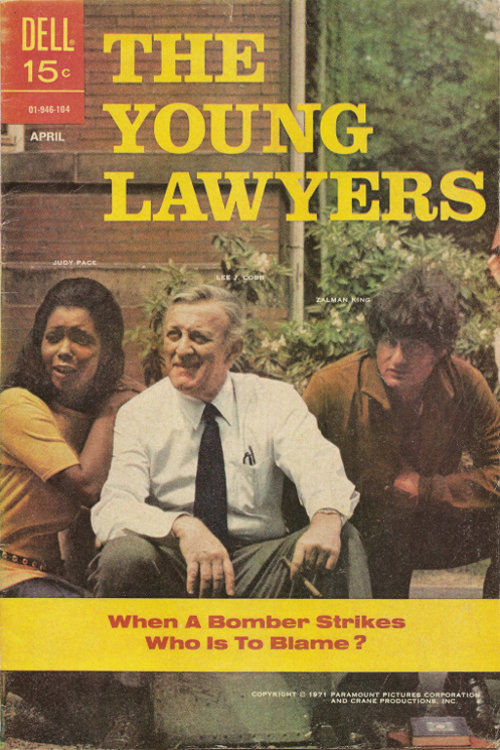 The artwork isn’t great. Most of the characters are fairly nondescript. The comic book version of David Barrett looks nothing like Lee J. Cobb and the hair color is noticeably wrong. However, Zalman King’s unique features and wild hair are captured quite well.

There are two separate stories in this issue. The first is called “Under the Skin…” and is quite frankly awful. It’s the tale of a mustached, long-haired, motorcycle-riding hippie who isn’t welcome anywhere or by anyone. He’s run out of a restaurant and then literally run off the road by a big rig. That’s when Captain Freedom decides to sue the people of the United States of America using the Ninth Amendment.

Barrett tasks Aaron with building a case, so he hopes on the back of Captain Freedom’s motorcycle and sees first hand how people react to his client. It’s an eye-opening experience. Aaron even gets into a fight defending Captain Freedom. Ultimately, Captain Freedom decides to drop the lawsuit and disappears, thankful to have met one person who cares. That’s when Aaron and the others learn that Captain Freedom has a Masters Degree in philosophy and served two tours in Vietnam.

The second story (“Explosive Justice!”) is slightly better. The NLO building is bombed and suspicious immediately falls on a client who wasn’t satisfied with the defense he was given. While going through case files late at night, Aaron is attacked by a shadowy figure. 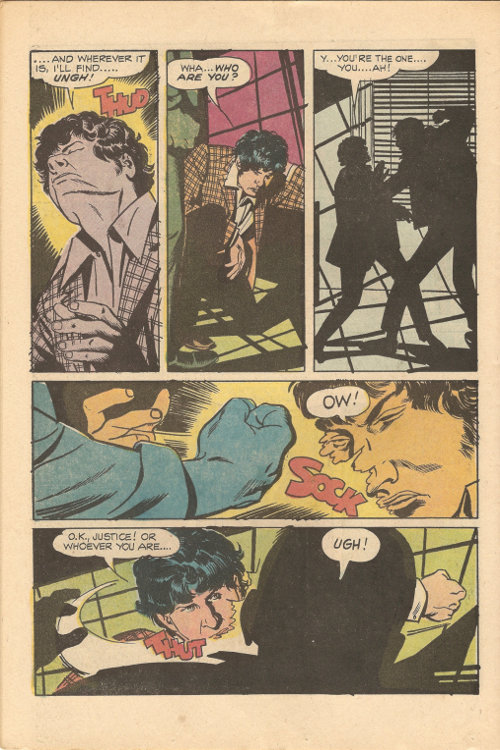 The next day, another law student named Bart notices a missing file which points to a man charged with bombing a Selective Service office. The NLO successfully defended him. Aaron can’t understand why that man would want to bomb their building. Then he remembers how he punched the shadowy figure who attacked him in the chin. Bart has a bandage on his chin.

It was Bart who planted the bomb. He wasn’t angry or bitter. His plan was to lay the blame on the former client, bask in the glory of solving the case, and then get a job at a top law firm eager to hire him. I didn’t exactly see the twist ending coming at first, although once I realized he had a bandage on his chin I started getting suspicious.

The first story is 17 pages long while the second runs for 15 pages. That adds up to 32 pages of legal action uninterrupted by advertisements or promotions. There are black and white advertisements on both the inner front and inner back covers as well as a color advertisement for Daisy B-B Guns on the back cover.

The Young Lawyers only lasted one season. A third young lawyer was added to the cast in January 1971 but doesn’t appear in either of the stories in this issue.

One Reply to “Bookshelf: The Young Lawyers #2 (Comic Book)”