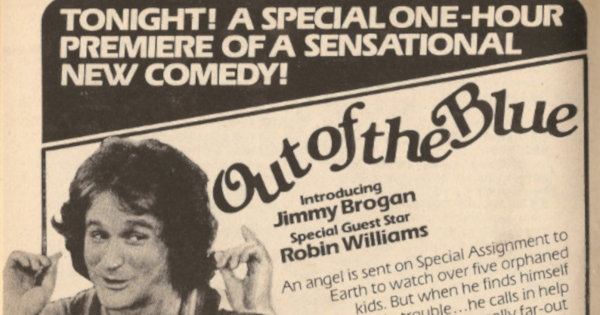 Here’s an ABC TV Guide ad from September 1979 promoting the series premiere of the network’s new sitcom Out of the Blue:

TV Guide Ad for Out of the Blue – Copyright 1979 Triangle Publications, Inc.

Out of the Blue debuted on Sunday, September 9th, 1979 with a special-hour episode airing from 7-8PM. It was followed by the season premiere of Mork and Mindy, which is also promoted in the ad. The show was a big flop for ABC. It went off the air in December 1979 leaving four completed episodes unaired.

This particular ad is from the Eastern New England Edition of TV Guide. Channel 5 was WCVB-TV in Boston, MA; Channel 8 was WTNH-TV in New Haven, CT; Channel 9 was WMUR-TV in Manchester, NH; and Channel 12 was WPRI-TV in Providence, RI.