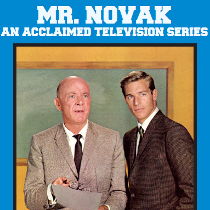 Bookshelf columns examine printed matter relating to television. I love watching TV and I love reading about it: from tie-in novels to TV Guides, from vintage television magazines to old newspaper articles.

Full disclosure: The author sent me a digital copy of this book. He also sent six episodes of Mr. Novak because I hadn’t seen any. The decision to review the book and the opinions in this review are my own.

Believe it or not, author Chuck Harter watched his first episodes of Mr. Novak in 2015. Intrigued by what he saw, he wanted to learn everything he could about the series. When he discovered no one had written a book about it, he decided to do it himself. And he did. Mr. Novak: An Acclaimed Television Series is the result.

Despite low ratings, the series received critical acclaim and support from teachers, and NBC renewed it for a second season.

As Harter explains in the book, Mr. Novak underwent a variety of changes after its first season. Jeanne Bal left the series and E. Jack Neuman stepped back as producer, replaced by Leonard Freeman. The actress hired to replace Bal–Phyllis Avery–soon opted to leave the series as well. Partway through the second season, Dean Jagger left due to medical issues. Burgess Meredith replaced him as principal.

Continued low ratings, the cast changes, and production problems led NBC to cancel the series at the end of the 1964-1965 season.

This book came far too late to include interviews with the creator or stars of Mr. Novak. James Franciscus and Dean Jagger died in 1991, Burgess Meredith in 1997, and E. Jack Neuman in 1998. Harter quotes from archival interviews drawn from newspaper articles and sources to give their thoughts and opinions about the series.

Harter also relies on the recollections of Marian Collier and Kitty Wellman. Collier played teacher Marilyn Scott and, several years after Mr. Novak ended, married creator E. Jack Neuman. She shares her memories of Neuman, Franciscus, Jagger, and Meredith. Kitty Wellman was married to James Franciscus from 1960 to 1977 and offers her insight into his feelings and opinions about Mr. Novak.

The meat of Mr. Novak: An Acclaimed Television Series is an exhaustive look at the production of the series. Harter covers it all: from the pilot all the way through cancellation. He mixes archival interviews with memories drawn from the many interviews he conducted. At times, these chapters can feel a little repetitive. One episode starts production, another airs and is well received by critics. A guest star recalls interacting with James Franciscus or Dean Jagger. Then the cycle repeats itself. The text includes few dates, making it difficult at times to keep track of when one episode began filming or another aired. But these are minor quibbles.

There is also a comprehensive episode guide and seven appendices that together make up almost half the book. The episode guide includes brief summaries, cast and crew credits, and contemporary reviews. The appendices range from a list of awards won by the series to an eight page novelization of a rejected Mr. Novak/Dr. Kildare crossover.

Mr. Novak ran for 60 episode on NBC from 1963 to 1965, then disappeared for more than 20 years. Repeats aired on TNT in the late 1980s before the series disappeared again. Chuck Harter didn’t let the fact that Mr. Novak slipped into relative obscurity decades ago stop him from writing a book examining the series in detail. If you have fond memories of watching Mr. Novak in the 1960s, you’ll enjoy reading Mr. Novak: An Acclaimed Television Series.

The official website for the book can be found here. You’ll find an announcement that the first season is coming to DVD in 2018 here.

Support Television Obscurities and purchase your copy of Mr. Novak: An Acclaimed Television Series through Amazon.

One Reply to “Bookshelf – Mr. Novak: An Acclaimed Television Series”