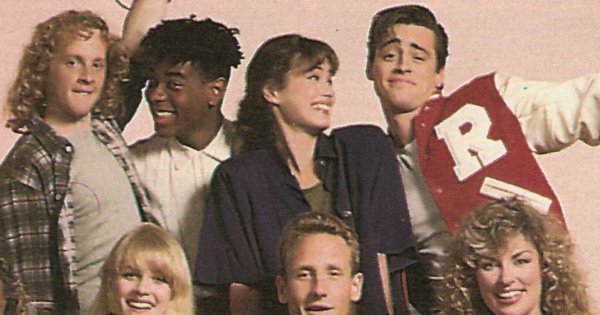 There was a show sometime in the early 1990s about this high school AV Club that got its hands on some surplus cameras and monitors and were able to run a TV station. I think the show ran a season, possibly as a midseason replacement, and it was on ABC.
Jake

TV 101 aired on CBS from 1988 to 1989. Although 17 episodes were produced, only 13 were broadcast. Low ratings were what doomed the show, which aired in thee different time slots, but controversy surrounding a three-part story involving abortion probably didn’t help.

Sam Robards starred as Kevin Keegan, a recently divorced news photographer who takes a job at his old high school. He’s supposed to be advising the newspaper club but instead suggests they produce a television report instead. The principal (played by Leon Russom) remembered Keegan as a troublemaker and the two butted heads. Thankfully the students were far more enthusiastic. Brynn Thayer played Emilie Walker, Keegan’s former journalism teacher who supported him. The students were played by Stacey Dash, Alex Desert, Matt LeBlanc, Teri Polo, and several others. 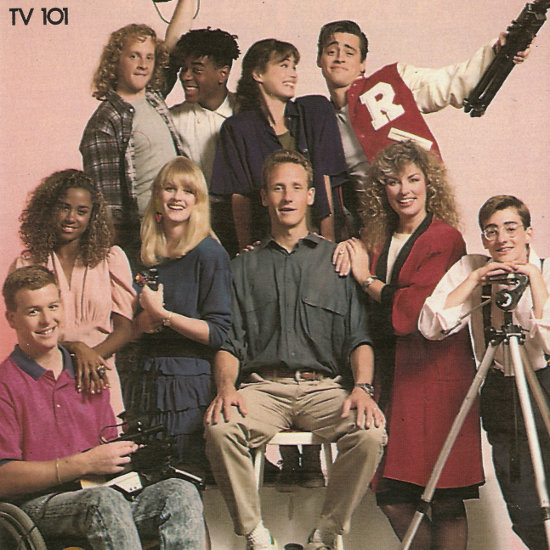 Produced by Grant Tinker’s GTG Entertainment, TV 101 was one of the last premieres of the 1988-1989 season, which started late across the board due to a writer’s strike. The new series didn’t debut until Tuesday, November 29th, 1988 in a tough 8-9PM time slot opposite Who’s the Boss? and Roseanne on ABC and Matlock on NBC. In January 1989, after just four episodes it was moved to the Wednesday at 8PM time slot. CBS moved it again in March, this time to Saturdays at 9PM where it faced Golden Girls. Ratings remained low and eventually the network gave up on the series. The final episode aired on March 25th, leaving four episodes completed but unaired.

The series tackled serious subjects including homelessness, drunk driving, teen pregnancy, and steroid abuse. Each episode included footage shot by the students for their fictional weekly news show. Critics were generally positive in their reviews.

I have been trying to think of the name of a TV show that had 4 young men, each with some sort of super hero trait. The sorta slight built one had great strength, etc. If I’m remembering correctly it was similar to the Monkees in their silly antics and they sang also.
Kim

The Kids from C.A.P.E.R. was a live-action Saturday morning children’s show that ran on NBC for 13 episodes during the 1976-1977 season. C.A.P.E.R. stood for Civilian Authority for the Protection of Everybody, Regardless. There were four Kids and each had some sort of special ability or power.

Steve Bonino played P.T., who had a powerful sense of smell; Cosie Costa played Bugs, who had both super strength and super speed; Biff Warren played Doomsday, who could talk to animals; and John Lansing played Doc, who had a brilliant mind. There were also two adult characters: Sergeant Vinton (played by Robert Emhardt), a police officer who mentored the kids, and Kurt Klingsinger (played by Robert Lussier), a TV reporter desperate to get a big story who usually ended up getting in the way instead. There was a shark named Mr. Featherstone.

The Kids drove around in the Big Bologna, yellow van that served as their mobile lab and also contained a tank for Mr. Featherstone, who was a crack navigator. The Kids sang the theme song as well as an original song in each episode.

NBC introduced its Fall 1976 Saturday morning lineup during a half-hour prime time special called “The Great NBC Smilin’ Saturday Mornin’ Parade.” Hosted by Freddie Prinze, the special aired on Friday, September 10th, 1976. The Kids from C.A.P.E.R. was heavily featured. The series premiered the following day. After 11 weeks, NBC pulled the show from its schedule in November 1976. It returned in April 1977 with repeats. Two additional episodes aired in May and August of 1977.

The C.A.P.E.R. Project website has a wealth of information about the series, which still has its fans today.