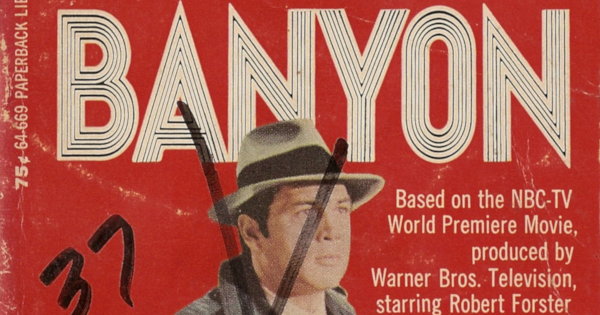 I try not to review TV tie-in novelizations of episodes or telefilms I haven’t seen. It’s bad enough reviewing a regular tie-in novel when I’ve never the show it’s based on. Reviewing a novelization without having seen the source material is so much worse. But ever since I relaunched my Bookshelf feature back in July 2013, I’ve done my best to only discuss tie-in novels based on short-lived TV shows, which means I’m very limited in what I can review.

That’s why today I’m reviewing Banyon, the novelization of the telefilm of the same name by prolific TV tie-in author William Johnston even though I haven’t seen the telefilm. I have read a few hard-boiled detective novels like The Big Sleep and The Dain Curse, so I’m familiar with the genre to some degree.

Banyon aired on Monday, March 15th, 1971 as an NBC World Premiere Movie. Robert Forster starred as the title character, a former police officer turned private eye named Miles Banyon. Set in 1937, the telefilm co-starred Anjanette Comer, Herb Edelman, Hermione Gingold, and Jose Ferrer. The script for the telefilm was written by Ed Adamson. NBC was pleased with how the pilot movie performed and order a weekly series. Forster was the only member of the cast to return. The series debuted in September 1972 and was off the air by January 1973 after 15 episodes.

After finishing the novel, I dug up a lengthy summary of the pilot telefilm published in newspaper television listings. It matches exactly the plot of the novel. I also scanned through the pilot’s IMDb page and recognized virtually every character listed. So I’m relatively confident that the novelization did not stray to far from what was seen on screen. 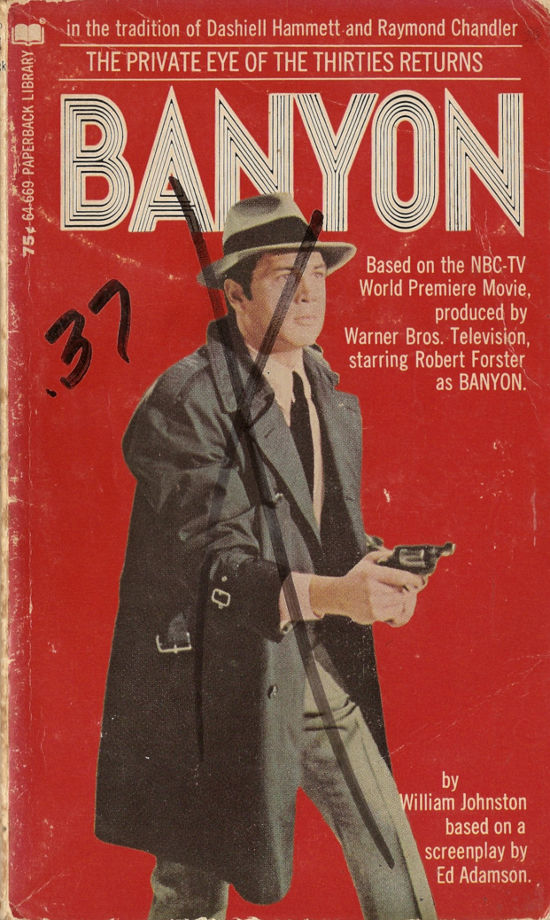 There isn’t much to the character of Miles Banyon. He’s bitter, having been betrayed by his former partner on the force, and he likes to crack jokes regardless of the situation. The plot starts off simple enough: a woman is murdered in Banyon’s office and he wants to track down her killer. The police know Banyon didn’t do it but Lt. Pete Cordova (played by Darren McGavin in the telefilm) doesn’t want Banyon investigating. He does anyway with the help of his friend and occasional legman Harry Sprague (played by Herb Edelman). Harry’s a drunk, whose wife Ruth (played by Leslie Parrish) is sick of waiting for him to come home. Ruth and Banyon used to date before she married Harry.

Initially, Banyon thinks the killer is a man named Victor Pappas (played by Ray Danton) who just got out of jail. Victor has motive but Banyon isn’t quite convinced. If Victor is responsible, it’s likely he also wants to kill Banyon and a radio newsman named Lee Jennings (played by Jose Ferrer) because the two of them helped put him behind bars. Lee’s wife is a beautiful woman named Diane (played by Anjanette Comer) who takes an interest in Banyon.

Very quickly, the story starts to get a little confusing. It’s nowhere near as incomprehensible as The Big Sleep and I was able to half guess the ending. Whether that’s due to excellent foreshadowing or weak writing is questionable. The climax unfolds a little quickly and frankly isn’t very satisfactory. There just isn’t much logic to the convoluted scheme that resulted in several murders. It doesn’t hold up .< /p>

Running throughout the novel is a bizarre subplot involving a mechanical contraption Banyon has built. He refers to it as The Thing and it doesn’t work very well. Maybe I’m dense and there’s some sort of meaning or symbolism to The Thing I’m missing. I’m not sure whether The Thing returned in the TV series.

There’s another subplot, this one having to do with Banyon’s secretary. He has an agreement with Peggy Revere (played by Hermione Gingold) who runs the Revere Secretarial School in the same building where Banyon has an office. Mrs. Revere provides secretarial students for Banyon free of charge. They get experience and he gets a new secretary every few days. 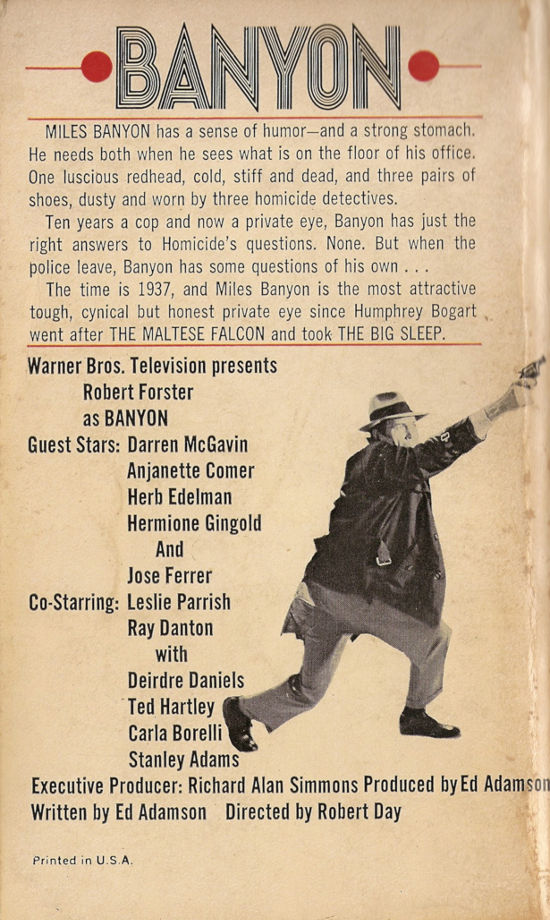 Overall, I enjoyed the novel. It’s a quick read. I’m guessing the telefilm was even more enjoyable because of the period clothing, hats, cars, and all that. There are a handful of references to the late 1930s in the text, including a group of models dressed like Ginger Rogers, but for the most part it’s easy to forget it takes place in 1937. Aside from the lengthy scene at a German American Bund camp, that is.

From what little I’ve read, the pilot telefilm was generally well-received. Some significant changes were made for the TV series, however. Banyon had a girlfriend, for one thing, played by Julie Gregg. Peggy Revere was still around (Joan Blondell took over the role) and still provided Banyon with a new secretary each episode. There was a new police detective, played by Richard Jaeckel, replacing Darren McGavin.

Critics weren’t very impressed with the series premiere and viewers weren’t either. Still, I’d like to see the pilot telefilm at some point just to compare it to the novelization.

One Reply to “Bookshelf: Banyon (Novelization)”