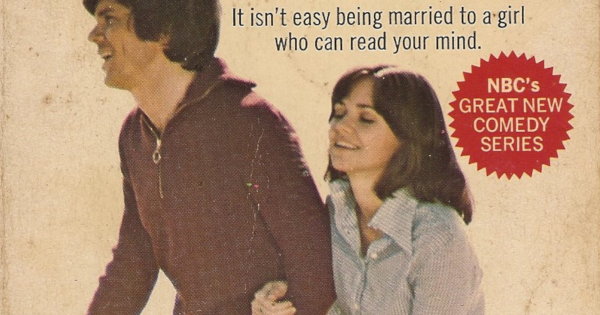 The Girl With Something Extra
By Paul W. Fairman
First Published 1973
Published by Lancer Books
192 Pages

Another month, another review of a TV tie-in novel to a short-lived series I’ve never seen: NBC’s The Girl with Something Extra starring Sally Field and John Davidson. This one happens to be a one season wonder that ran for 22 episodes during the 1973-1974 season. Field and Davidson played newlyweds Sally and John Burton. The something extra was Sally’s power of extrasensory perception, which allowed her to read minds, and which John (a lawyer) only found out about on their wedding night. 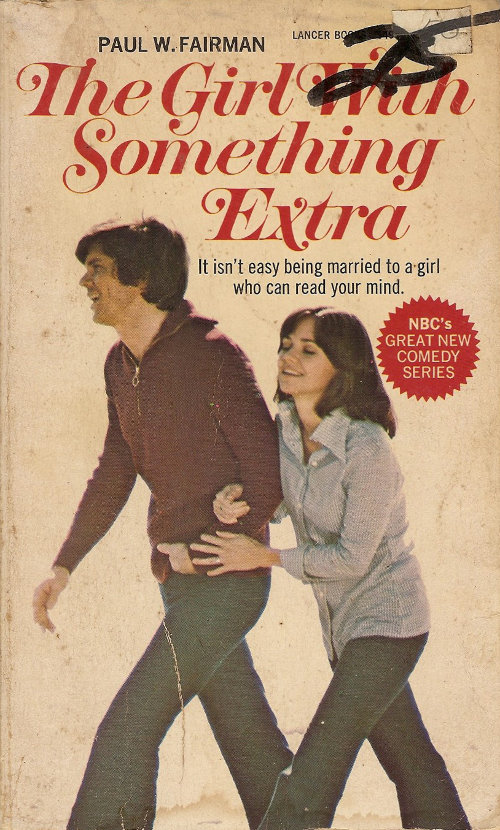 The series featured a number of supporting characters, including John’s brother Jerry (played by (Jack Sheldon), who was the only other person who knew about Sally’s ESP. There was also John’s boss Owen Metcalf (played by Henry Jones), his secretary Angela (played by Stephanie Edwards), as well as Sally’s friend Anne (played by Zohra Zampert) who owned the store where Sally worked. Anne is referenced in the novel and Jerry makes a very brief appearance. Otherwise, it is all about Sally and John.

The only publication date anywhere in the novel is 1973. There’s no month but I’m assuming this was available for purchase in August or September 1973 to coincide with the premiere of the series. Maybe October or November. There’s no mention of this being an original story on the front cover. There is a small not along the spine on the back cover that notes “A Lancer Original — Never Before Published,” so it is indeed an original story.

Not having seen any episodes of the series I can’t speak to how well the characters are represented in the novel. But it was a good read. It was also a quick read, as so many of these tie-ins are, although at nearly 200 pages it’s actually quite long.

The plot concerns Sally and John trying to stop a bank robbery only to discover Sally made a mistake, hearing a jumble of thoughts and confusing the real robber with a wealthy depositor. This sets off a wild chain of events that involve a bank teller caught up in the robbery, a scientist attempting to get Sally to read the mind of a dolphin, the robber threatening Sally, someone trying to kill Sally, a trip to John’s childhood vacation home, a reclusive artist supposedly attempting to kill Sally, and multiple police officers.

Things got a little bogged down during the last third of the novel, with a red herring thrown in to try to prolong the mystery of who may or may not be trying to kill Sally. 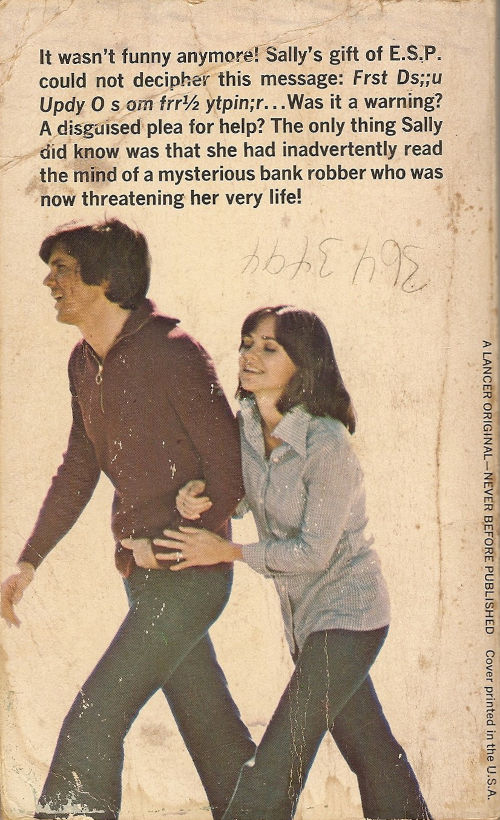 There’s an awful lot of writing on and in my copy of The Girl with Something Extra. Someone wrote 25 on the front cover, presumably a price, and what may be a phone number is scrawled upside down on the back cover. On the inner front cover someone wrote their name and address, indicating that it was once owned by a girl or woman in Michigan. The same name is written on the first page along with the number 74 in quotation marks, suggesting it was purchased in 1974.

It’s interesting that the same photo of John Davidson and Sally Field was used on both the front and back cover. Nobody in the publicity department over at NBC could provide Lancer with a second photo?

2 Replies to “Bookshelf: The Girl With Something Extra”