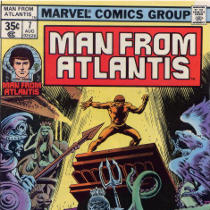 I’m reviewing the final three issues of Marvel’s Man from Atlantis comic book at the same time for two reasons. First, they make up a three-part adventure, so reviewing them together makes sense. Second, I don’t think anyone wants to read three more individual reviews. When I reviewed the very first issue back in July 2009 I wasn’t planning on reviewing the other six issues. But one thing led to another and over the next year I reviewed the second, third and fourth issues as well. In the future, if I ever review an entire comic series again, I’ll try to do it in one review.

As I mentioned, the three issues are chapters in a three-part story. Issue #5, “A Modern Master of the World,” begins with a sudden attack on Sea Base (operated by the Foundation for Oceanic Research). After ensuring that Dr. Elizabeth Merrill is safe Mark heads out into the open water to investigate. He makes his way to the surface and is stunned to find a massive aircraft dropping bombs on Sea Base. Navy planes are making a futile attempt to drive off the attacker, which eventually leaves after dropping a canister. 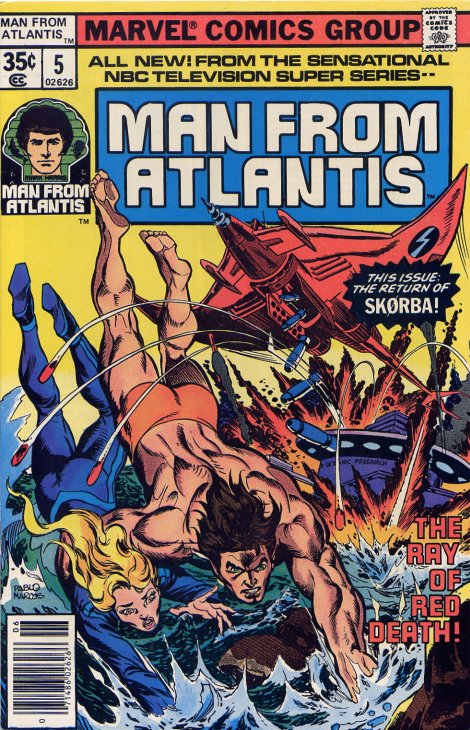 The canister holds a video tape which reveals that Lars Skorba is behind the attack (Mark has fought him before in the comic). He threatens to wreak havoc up and down the California coastline if Mark doesn’t agree to help him with a mysterious task. The Navy wants to wait to see if Skorba will attack again. He soon does, heading directly for Sea Base. Mark is forced to surrender to Skorba rather than see Dr. Merrill killed. Later, aboard Skorba’s aircraft, he attempts to escape, only to discover that the aircraft is surrounded by dinosaurs!

In issue #6, “Latitude: Ninety!,” the dinosaurs are said to exist in a “smoldering volcano” in “the midst of the frozen polar wastes.” Mark is sent out to explore a series of tunnels below the volcano’s lake. He discovers a deserted city, filled with statues covered in strange hieroglyphics. For some reason he wonders if he could have come from this city. Before he can explore further, he is attacked by a woman and two dogs. As Mark tries to keep from hurting anyone, he uncovers a chamber filled with treasure, which is obviously what Skorba is after, and learns that the woman’s dogs can talk!

Meanwhile, aboard the Ceteacean, someone activates the outer airlock. Who can it be but Mark? But it’s not. It’s a mysterious, laughing figure. Unlike issue #5, this issue included a letters column (Out of the Depths) in which the cancellation of Man from Atlantis is discussed. No mention is made of the comic book ending, however. On the contrary, it seems that Marvel plans to continue publishing the series.

Issue #7, “Mad Dogs and Dinosaurs,” begins with Mark and Plaxy (the woman who attacked him in the previous issue) making their way to the top of the volcano. Plaxy’s talking dogs are named Cassiopeia and Sirius. They were given the gift of speech by Plaxy’s father, who developed special speech collars. Plaxy’s parents work at a research station at the North Pole (her older sister stayed behind in England). Shortly before they were to leave, a Tyrannosaurus Rex suddenly appears.

As research center personnel try to fight off the dinosaur, it falls over and lands on the center itself, killing everyone but Plaxy and the dogs. They’ve been living inside the volcano ever since. Skorba, somehow, learned of the volcano and its treasure. Plaxy plans on driving off Skorba and his men, however, and unleashes a barrage of spears followed by a dinosaur charge. As Skorba makes his getaway, he tosses one of his hench-woman into the path of the dinosaurs. Mark leaps off the back of a dinosaur to try to save her and is nearly killed by Skorba.

Plaxy and her dogs are able to subdue Skorba, however, and the hench-woman is revealed to be Plaxy’s sister, who has been searching for the volcano for years. She eventually partnered with Skorba because only his aircraft could get to the volcano. Mark, after seeing the sisters reunited, leaves to investigate the deserted city, wondering again if it was his city. But he has no way of knowing and eventually heads back to the Ceteacean. Once on board, he hears laughter coming from the bridge. 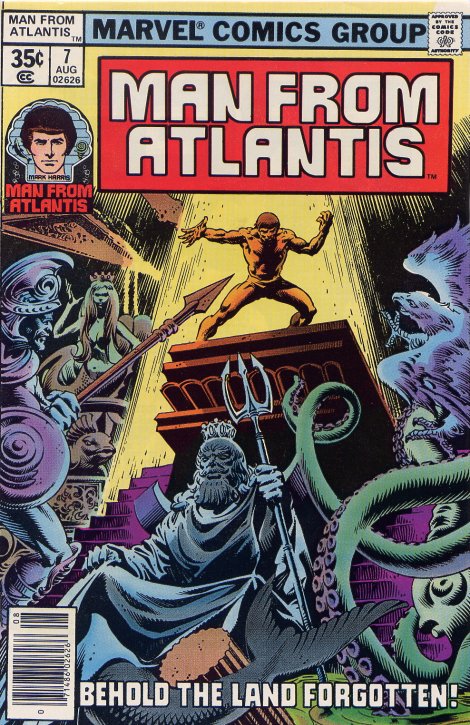 When he makes his way to the bridge, Mark finds the Dr. Merrill and the others playing with blocks and other toys as a mysterious man with pointed ears and a long nose, wearing a court jester’s outfit, sits and laughs. If there had been another issue, the identity of this man — who called himself Merry — certainly would have been revealed. But there were no more issues of Man from Atlantis from Marvel Comics. Here’s what Bill Mantlo, who wrote the comics, had to say:

By now you know, if you read MAN FROM ATLANTIS #3, that this issue is Marvel’s last to deal with the adventures of Mark Harris. We here at the Bullpen regret the decision to cancel as much as we’re sure you do. It was a decision that was forced on us by circumstances, not sales, and we’re still hoping that the success of the comic itself will be proven by an upsurge of letters from all of you concerned Atlantis-fans out there.

It’s a funny thing, the demise of a book. Many of us put in quite a lot of time, energy and love to its creation. We borrowed the original stimulus from the TV show, to be sure, but we also invested much of our own concern in the mag…and we think it showed.

MFA may be gone–then again it may not. Your mail can still change that, and so can sales figures which we’ve yet to receive on even MFA #1! Mark Harris may be gone from Marveldom, but undersea adventures are in the works on another great mag even as we write this…what do we call it?…eulogy. Be that as it may, there’s still one thing that remains to be done, and that’s to thank all the people who helped bring you MAN FROM ATLANTIS for the few short months of its existence. There are too many names to list them all, but we can certainly spare space to express our appreciation to Fearless Frank Robbins and Fun-loving Frank Springer. Then there’s Janice Cohen, ARchie Goodwin, Jim Shooter, Ralph Macchio. Last but not least we have to say a word of thanks to Mary Jo Duffy, who cared so much that it hurt.

And we have to express our heartfelt gratitude to you, True Believers, who stuck with us, who wrote in, who plunked down your 35c to show us that we were doing good! Thanks, people! Thanks a million!

Notice the mention of issue #3 in the first sentence. I couldn’t find any mention of Man from Atlantis ending or being canceled in that issue so I’m not sure what Bill Mantlo was referring to. I don’t know why the decision was made to end the series, although I assume it had something to do with the demise of the television show. Given that the final page of issue #7 introduced a new character, some work must have been done on issue #8. Was the story completed? Were pages drawn, inked and colored? As far as I know, Marvel never published another story featuring Mark Harris.