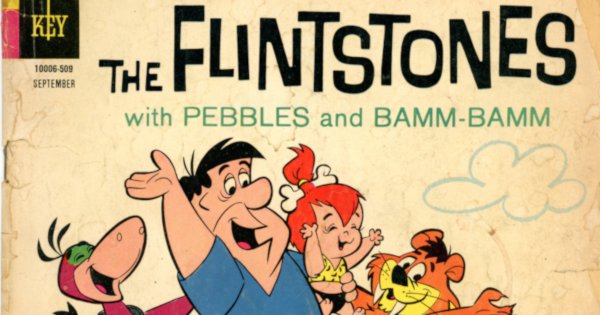 The history of comic books based on The Flintstones dates back to 1961 when Dell Comics published Dell Giant #25 (with a September 1961 cover date), an 84-page comic with multiple stories and activities. Dell considered this the first issue of The Flintstones comic book and proceeded to publish five more issues between 1961 and 1962, numbered #2 through #6. In 1962, Dell split with Western Publishing, a separate company that produced many of the comics Dell published. Western retained the rights to licensed titles like The Flintstones and launched Gold Key Comics.

Gold Key Comics published 54 issues of its comic book based on The Flintstones between 1962 and 1970, for a grand total of 60 issues. The issue I’m reviewing is #29, which carries a cover date of September 1965. That means it was likely on newsstands in July.

As you can see, my copy of the issue is in rough shape. The front and back covers are entirely detached but otherwise mostly intact. Several chunks of the front cover are missing. There’s also severe water staining on the front cover, including what looks like a partial coffee cup ring. The interior pages are in decent shape aside from minor water staining on the top and bottom of the first two pages.

I don’t mind the condition because I only had to pay $2 for the comic. I don’t remember when I bought it or, to be honest, why I bought it. The Flintstones was not a short-lived TV show. On the other hand, in the past I’ve reviewed issues of comic books based on I Love Lucy, Bonanza, Star Trek, and The Twilight Zone. None of them were short-lived either.

“‘D’ is for Desert…and Danger” sees Fred, Wilma, Barney, Betty, Pebbles, and Bamm-Bamm fly to Parisrock for a vacation. Fred and Barney soon get into trouble while looking for the local chapter of their lodge. “The Unschooled Scholar” features no characters from the TV series. It’s about a little cave boy who seems to know more than his teacher. Fred gets a second job delivering milk in “Doing Double Duty” but has trouble juggling the extra work.

Unlike many TV tie-in comic books, the characters in this issue look nearly identical to their TV counterparts. It’s far easier to accurately transfer a cartoon to the pages of a comic book than a live-action TV series. “Doing Double Duty” is the best of the three stories, followed by “‘D’ is for Desert…and Danger.”

Do you remember reading comic books based on The Flintstones in the 1960s? Hit the comments with your thoughts.