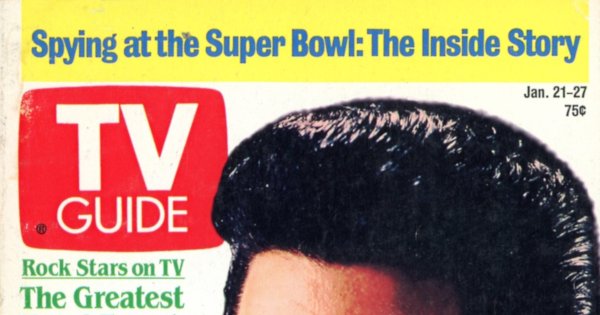 On the Cover: Montage of Rock Stars

I skimmed the article about rock stars on TV, which names the December 1968 NBC special “Elvis” the greatest televised rock performance of all time. A sidebar examines rock ‘n’ roll sitcoms, including The Adventures of Ozzie and Harriet, The Monkees, The Partridge Family, and the short-lived sitcom Dreams, which ran for just five episodes on CBS in October 1984.

As someone who doesn’t follow sports, the idea that someone would try to spy on an NFL team during practice seems ridiculous. And yet Vic Carucci’s article about spying and the Super Bowl treats the idea very seriously. For all I know, it was a serious issue back in 1989 (and may continue to be a problem today). TV Guide contacted coaches and players like Mike Ditka, John Elway, and Joe Montana and asked what information would be useful, if someone wanted to spy on another team. “With all the film you have on your opponent,” John Elway explains, “the only thing you could possibly get would be new formations the team is using or an h special or trick plays they’ve installed. You could also get an idea of how they are using their personnel–who’s in or out in certain situations.”

John Hersey’s two-page article about nuclear false alerts probably had more of an impact thirty years ago. Reading about false alarms due to a malfunctioning computer chip at an Air Force Base in June 1980 or a false alert in November 1979 due to human error isn’t particularly scary in 2019. Perhaps it wasn’t in 1989, either. The two-page article is little more than promotion for an upcoming PBS documentary series, “War and Peace in the Nuclear Age”. [It debuted January 23rd.]

The two-page profile of West 57th correspondent Karen Burnes is of interest to me because the CBS newsmagazine is largely forgotten today. It aired sporadically from August 1985 to September 1989. Karen Burnes replaced correspondent Jane Wallace on West 57th in January. Before that, she spent nine years as an investigative reporter and producer at ABC. Here’s perhaps the most intriguing part of the profile:

The opportunity to do a wider variety of stories as one of the things that attracted Burnes to West 57th in the first place. Once she got there, however, she became concerned that the show’s prodigious appetite for material in general and its penchant for celebrity profiles in particular threatened to leave no time for the painstaking investigative reporting she’s known for. One of her first assignments called for her to interview Michael J. Fox; she wasn’t sure, but she thought he might be a stockbroker. Told he was a big TV and movie star, she said to herself, What am I going to talk to him about?”

Burnes also had to get used to having less control over her stories. She refuses to go into detail about her unhappy childhood. While working on a story about the child-welfare system in Oklahoma for ABC, Burnes realized her calling. “That’s when I was really changed profoundly in terms of feeling I had to do this work. I had never before seen the deliberate abuse of human beings. It totally changed my sense of the world, my sense of justice. I was so angry.” That anger may explain why she works more than she should, leading friends to worry about her. Due to constant pain from back problems, she’s unable to exercise, so she throws herself into her job instead.

There’s also a profile of actress Jasmine Guy, who plays Whitley Gilbert on NBC’s A Different World, which I skipped.

Lawrence Eisenberg’s Grapevine includes tidbits about Lee Remick performing at the Polo Lounge, Bill Kirchenbauer getting heckled during his stand-up routine, the stories James Earl Jones tells his son, how Ray Milland teased Peter Graves about his Millsion: Impossible fame, and more. Alan Carter shares stories about Brian Starcher, Elizabeth Dennehy, and Brad Sanders in Soaps. Mel Durslag’s Sports View tackles the projected audience for the upcoming Super Bowl, the cost of Super Bowl Rings, and what Al Davis has to say about the importance of good kickoff coverage.

Prices from the Video Cassette Report for movies on VHS: Bellman and True ($79.95), Hot to Trot ($89.95), Iron Warrior ($19.95). Cheers ‘n’ Jeers praises syndicated Super Bowl specials “The Road to the Super Bowl” and “John Madden’s Super Bowl Special,” criticizes the TV networks for airing inappropriate commercials during certain programs, and boos Moonlighting and Hooperman for spending last season focusing on pregnancies only to write the babies out of the plot line at the start of this season.

Merrill Panitt begins his review of ABC sitcom Roseanne by stating simple fact: viewers either love Roseanne and her show or they hate her and the show. Based on the ratings, viewers love both her and the show. He praises John Goodman’s acting. As for Roseanne, “while she’s no actor, she doesn’t have to be.”

The show may have gained its instant success because viewers were ready for something other than sitcoms with perfect parents, adorable children, grammatical English and white-collar characters. They may have been ready for a family–a close and loving family, under all that surface fussing–that seems just a bit closer to reality.

[I wonder what Panitt, who died in 1994, would’ve thought of the recent Roseanne revival or its continuation/spin-off The Connors.]

There are only two In the News reports this week. The first is about the behind-the-scenes shakeup at Roseanne, with creator and executive producer Matt Williams being pushed out. The second is about local TV stations upset at a new ESPN contract to televise major league baseball games four nights a week.

On the Grapevine contains three reports this week. The most interesting is about how actor Sam Sells had to be rushed to the emergency room after being accidentally punched in the face while filming an eipsode of Dynasty. The doctors started treating the gunshot wound on his leg, not realizing it was fake.

According to The Ratings Race, Knots Landing has overtaken Dallas as TV’s top-rated soap opera. Through the first 17 weeks of the 1988-1989 season, Knots Landing has averaged a 15.6/26 Nielsen rating/share while Dallas has a 15.5/26.

Three of the eight letters in this issue are about the movie It’s A Wonderful Life:

How come all of a sudden “It’s a Wonderful Life” is being hailed as practically the greatest movie ever made [“Don’t Miss Jimmy Stewart Talking the Shrubbery–or Donna Reed Losing Her Bathroom,” Dec. 24]? It’s been playing every Christmas for as long as I can remember and, frankly, I am sick and tired of it. Granted, it’s an entertaining little movie, but it’s hardly a Christmas “Gone with the Wind.”
Mary I.
Asheville, N.C.

It’s good to see the richness of Frank Capra’s greatest work is finally being recognized. Its magnificent performances will continue to enthrall audiences for decades. How many actors in their prime today could make such a “corny” script come alive with compassion?
Mel H.
Beebe, Ark.

Roger Ebert called colorization “the worst thing” ever to happen to “It’s a Wonderful Life.” Worse than being butchered by every local V station and cut-rate video duplicator at will? If you can’t stand the color, turn down the color knob.
Peter M.
Los Angeles

[I wonder if anyone writes or e-mails TV Guide these days complaining about TV shows cropped to the wrong aspect ratio?]

NBC (13) (35) (4) (4D) (22) (33) NIGHTINGALES–Drama; 90 min;
Debut: An edited repeat of the 1988 TV-movie pilot launches this series about some student nurses who try collective living and a taste of the fast life in Los Angeles.
[Another episode airs Wednesday a half hour later in the series’ regular time slot.]

Thursday, January 26th, 1989
8:00PM ABC (24) (2) (7D) (21) FINE ROMANCE (CC)–Comedy-Drama; 60 min.
In Dublin, Michael (Christopher Cazenove) is at a loss when Louisa (Margaret Whitton) uses his paycheck to buy a horse with a partner, who suddenly disappears and then reappears the next day, only to be killed in front of her–apparently. Meanwhile, Louisa’s Aunt Grace tries to reunite the former couple; newlywed Miles (Kevin Moore) thinks his wife has run of with the butcher. George: Ernie Sabella. Friday: Dinah Lenney.

Once again, the articles don’t provide much insight into network television in January 1989. Before reviewing this issue, I’d never heard of Dolphin Cove (CBS) or Studio 5B (ABC), two short-lived mid-season replacements. It’s always nice to stumble upon forgotten TV shows I’ve never heard of and the 1980s and 1990s have plenty of them. Those decades are a bit of a dead zone for me. I do most of my research and writing about the 1950s, 1960s, and 1970s.

That’s it for this issue. Check back next week for my review of the January 28th, 1989 issue of TV Guide. As always, hit the comments with any thoughts or reactions.