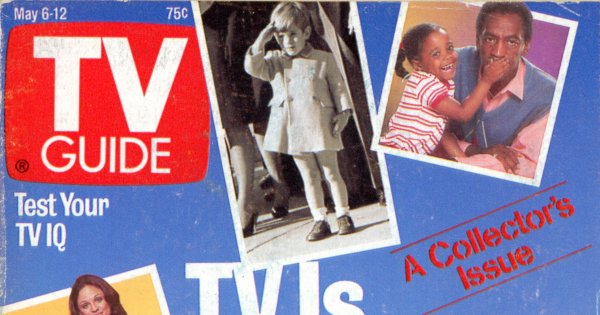 If only every issue of TV Guide was like this one. To celebrate the 50th anniversary of television, TV Guide dedicated an entire issue to looking back at five decades of television, with lists and trivia and articles and more.

“Television is by nature an ephemeral medium,” Jeff Canfield declares. “Yet once in a long while, a television event makes an enduring mark: either because of what we saw on our screens or because it marked a milestone in the history of this medium.” Here are “The Moments You Can Never Forget”:

David Halberstam suggests the first evidence that television would dramatically change our lives may have been the popularity of Milton Berle in the late 1940s and 1950s. “If that was the first sign, there have been countless others as television has transformed our society politically, culturally, demographically.” Here are six important examples of “TV That Changed Our Lives”:

Here are some of the questions in Teresa Hagean’s TV quiz:

David Lachenbruch’s look at the evolution of TV sets ends with a preview of what’s to come:

The digital television set is basically a computer that shows television. It can be the heart of a home media center. New digital TVs give you two pictures on the screen (picture-in-picture) if you wish, or they can double the number of lines in the TV picture (improved definition TV), and they’ll lead to the TV of the future, high-definition TV (HDTV), a wide-screen picture with all the detail of a movie.

Lawrence Eisenberg presents various stories from television’s first five decades, including tidbits about Mike Wallace’s first TV appearance on WBKB in 1946, the cast of Bonanza wearing lifts in their boots, Oprah Winfrey’s first TV job in Nashville in 1973, and more. Joanna Elm’s article about news anchors starts with Douglas Edwards having his tie replaced minutes before going on the air for the first coast-to-coast nightly newscast on CBS in 1951 and ends with a brief mention of Dan Rather wearing a sweater in 1982 and seeing his ratings go up.

Teresa Hogan explores TV statistics. Milton Berle averaged a 61.6 rating and an 81 share during the 1950-1951 season but because only 3.8 million households in the U.S. had television, that meant just 2.3 million households were tuned in. That’s fewer than the least-watched network TV show (2.4 rating and a 4 share) during a recent week.

Robert MacKenzie asks “What Would Matt Dillon Have Thought of Sonny Crockett?” and explores how TV’s good guys and bad guys have evolved over the past 50 years, before asking what the next generation of TV heroes will look like. “The time is undoubtedly ripe for Asian and Hispanic heroes,” he declares. “A gay hero may no longer be unthinkable (but don’t hold your breath), and there are even signs that good-looking guys in nice suits are coming back.”

The final article, by Ron Powers, looks ahead at the next 50 years of TV:

To take the worst-case scenario first: who’s to say that television will not continue its rapid plunge into the American Id? We are already half-anesthetized to the spectacle of protofascist passions being stirred up on our talk shows and to vicious minority-bashing and sexual loathing serve up to cheering audiences on our “respectable” cable comedy showcases. How many more years are we from the “right” to watch voluntary shark-wrestling or a live execution?

Powers has hopes for a different future, one in which decentralization, destabilization and colonization create “a democratic and creatively rich New Age” for television in which dissatisfied viewers, unable to change the industry, become the industry instead. “Technologically and economically, a video ‘Declaration of Independents’ is now possible,” he declares.

I skipped the special 50th anniversary articles about soap operas and sports.

There is no review in this issue.

TV Guide Insider does not appear in this issue.

There are four In the News reports this week. One is a lengthy look at the steps NBC took to avoid controversy with its Roe vs. Wade telefilm while another reports the death of Lucille Ball. Also, ABC has all but cancelled Moonlighting, cutting the season short by one episode while NBC’s new vice-president of program standards and community relations is causing headaches for Dream Street creator and supervising producer Mark Rosner.

On the Grapevine contains three reports this week, one of which reveals Michael DeLuise has his father Dom DeLuise in the audience when episodes of NBC’s One of the Boys are taped.

According to The Ratings Race, more women are watching NBC’s Nightingales than men despite the fact the network tried to lure male viewers with “glitzy and suggestive” promos. The show is regularly beating Wiseguy (CBS) and China Beach (ABC) in the Wednesday 10-11PM ET time slot.

Three of the seven letters respond to Robert MacKenzie’s “A Busy Person’s Guide to TV” published in the April 8th issue. Here are two:

I’m tired of the critics’ constant whining about what they call the “whining” in thirtysomething. Robert MacKenzie was the latest to overwork the word. The people in thirtysomething are concerned with such subjects as the breakup of a marriage, a failing business, a child in emotional trouble, a parent dying, growing older, being alone. They also savor the beauties of young children, good friends, the possibility of romance. These are not yuppie concerns. They are human concerns, written and acted with compassion and humor.
Francesca B.
Flushing, N.Y.

8:30PM CBS (11) (2D) (7) (10) (15) HEARTLAND (CC)–Comedy
Johnny comes down with a major case of puppy love for a farmer’s daughter, while Casey (Kathleen Layman) is doggedly determined not to care for another family pooch.

Wednesday, May 10th, 1989
8PM CBS (11) (2D) (7) (10) (15) HARD TIME ON PLANET EARTH (CC)–Adventure; 60 min.
Jesse (Martin Kove) is roped into a rodeo after meeting a former champ whose better days are behind him and would prefer saddling up with an old pal who sells cars.
[At press time, it was likely that CBS would air this episode and not the one described in CBS’s ad for the program.]

This was easily the most enjoyable issue so far, with its focus on the history of television. There’s even a mention of the very first TV commercial from 1941. Alas, this was a special episode dedicated to the 50th anniversary of TV, so next week’s issue will be back to the regular collection of dull articles and useless profiles of actors and actresses.

That’s it for this issue. Check back next week for my review of the May 13th, 1989 issue of TV Guide. As always, hit the comments with any thoughts or reactions.