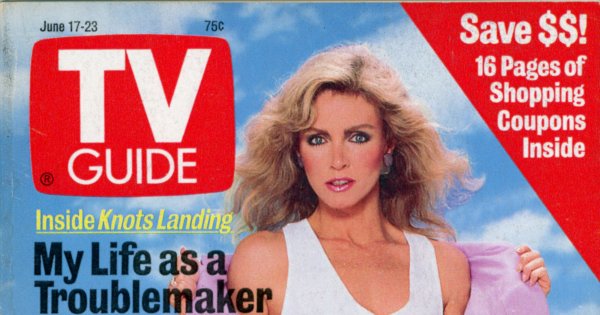 On the Cover: Donna Mills, by Charles William Bush

Once again, I skipped the cover article. I haven’t seen a single episode of Knots Landing and didn’t really need to learn why Donna Mills decided to leave the show after nine seasons. I did read the article about Father Knows Best, despite never having seen any episodes of that show, either. Timed to coincide with a “Father Still Knows Best: A Father’s Day Special” marathon on CBN Family Channel, the article examines how the child actors on Father Knows Best (Billy Gray, Lauren Chapin, and Elinor Donahue) were nothing like the characters they played.

I skipped the articles about presidential hopefuls and TV stars partying in Manhattan.

R.C. Smith reviews The Morton Downey Jr. Show but does very little reviewing. Downey’s attitude is discussed and Smith offers examples of the sort of guests the show books. There’s a negative tone to the review, even if it doesn’t come right out and say anything particularly negative about the show or Downey.

[TV Guide Plus includes the following categories: In The News, On the Grapevine, and Soap Opera Guide.]

There are three In the News reports this week. The first examines how the cable industry hopes to attract viewers during the summer while the networks are offering mostly reruns. The second ponders the fate of NBC Sports announcer Vin Scully. The third reveals the networks aren’t having much trouble moving correspondents and journalists into, and out of, China.

On the Grapevine contains three reports about Delta Burke and Gerald McRaney losing and gaining weight, Patch Johnson on Days of Our Lives losing his eye patch for a week, and what happened when Cops traveled to the Soviet Union.

Three of the seven letters respond to an article criticizing soap operas for redeeming rapists published in the May 27 issue. Here they are:

Waggett failed to mention the most controversial rape story currently going on: On Days of Our Lives, rapist Jack Deveraux’s crime was supposedly a “crime of passion,” and therefore went unpunished. The show wants viewers to believe that Jack only raped his victim because he “loved” her. Now the soap has this rapist romancing a young virgin. What’s tragic is that the many girls who watch this show may actually end up believing that rape is somehow romantic.
April E.
Worthington, Ohio

Making heroes out of rapists is like saying that women love to be humiliated and degraded. Genie Francis is keeping this idea alive all by herself. Not only did she fall in love with a rapist (Luke), but in her current role on Days of Our Lives, she was tied to a bed and left in a cabin all day by a man who supposedly loves her. When he got back, she was mildly upset, but ended up making love to him in the same bed!
Linda B.
Clovis, Cal.

10:30PM CBS (11) (2D) (7) (10) (15) DOCTOR, DOCTOR(CC)–Comedy
Mike (Matt Frewer) continues to have problems reconciling his personalized medical methods with those of his partners, putting his practice in critical condition.

Tuesday, June 20th, 1989
8PM CBS (11) (2D) (7) (10) (15) SUMMER PLAYHOUSE (CC)–Science Fiction; 60 min.
Return: A third season of comedy and dramatic pilots not on CBS’s announced fall schedule opens with the intergalactic adventures of two “Microcops” (William Bumiller, Shanti Owen), who land on Earth in hot pursuit of a cosmic crook named Cloyd (Page Moseley), only to discover that on this planet they are of cellular size.

The dull summer repeat season is definitely in full wing. There’s so little of interest this week, TV Guide only included four Close Ups in this issue, the fewest I’ve seen so far in 1989. There are also no advertisements for network or cable shows. Finally, whoever originally owned this issue tore out the 16-page coupon section. I hope they saved a bunch of money.

That’s it for this issue. Check back next week for my review of the June 24th, 1989 issue of TV Guide. As always, hit the comments with any thoughts or reactions.