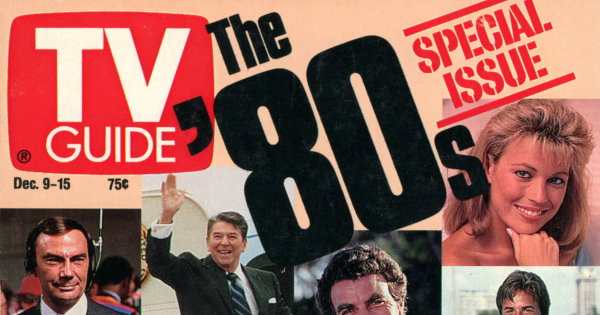 On the Cover: 16 stars of the 1980s, including Vanna White, ALF, Hulk Hogan, Oprah Winfrey, and Tom Selleck

This special issue is all about the 1980s. The lengthy three-part cover article lists the Top 10 TV personalities and the Top 20 TV shows of the 1980s plus 20 moments that shaped and/or shook the decade.

Here are the Twenty Top Television Personalities of the 1980s:

Here are the Twenty Top Shows of the Decade:

A two-page TV quiz has questions like “Can you name Higgins’ two Doberman pincers on Magnum, P.I.?” and “What was the first movie video-cassette to carry a commercial? For extra credit, name the product.”

There’s also a one-page list of actors, actresses, hosts, and personalities who died during the 1980s.

There are six news reports this week. The first examines the troubled CBS schedule and the departure of CBS Entertainment president Kim LeMasters.

Other reports: Falcon Crest‘s David Selby forced a script change over a seduction scene; MTV has a double standard when it comes to raunchiness; David Garrison is temporarily leaving Married with Children; lots of cast changes for daytime soap operas; ABC’s made-for-TV movie Blind Witness out-rated a repeat showing of the movie Top Gun on NBC.

Two of the seven letters respond to an article about Farrah Fawcett published in the November 11th issue. Here they are:

Just who does Farrah Fawcett think she is–judge and jury [“TV GUIDE Plus–Farrah: I Had to Think Twice About Playing a Killer,” Nov. 11]? Fawcett says of [convicted murderer] Diane Downs, the woman she played in Small Sacrifices”: “I did not want to talk to her. I knew she would try to convince me that he was innocent. I also made it a condition before taking on the role that she would not get any money for this, so that she could not use it to pay for an appeal.” What if this woman is innocent?
Pat T.
Milwaukee

Farrah Fawcett’s portrayal of Diane Downs was truly her best work to date. I saw her as Diane Downs, not Farrah Fawcett. She no longer has to use her beauty and body to get the point across. Keep up the good work!
Brenda F.
Warner Robins, Ga.

See my review of the September 9th, 1989 issue for the Channel Directory to the Hartford-New Haven Edition.

8PM NBC (4) (22) (30) ANN JILLIAN (CC)–Comedy
When Ann (Ann Jillian) goes out of town to have her wisdom teeth extracted, Lucy (Lisa Rieffel) takes part in a prank that brings the school football hero into the house to stay with her alone.

ABC (7) (40) FREE SPIRIT (CC)–Comedy
Thomas (Franc Luz) hires Winnie (Corinne Bohrer) as a secretary to help him with a contentious divorce, but Winnie moonlights as a marriage counselor for the dueling couple (Robert Reed, Florence Henderson) when she senses that they really still love each other.

ABC (7) (40) HOMEROOM (CC)–Comedy
When bus supervisor Phil (Bill Cobbs) tries to teach Darryl’s class about the streets in their neighborhood, he collides with Devon’s bad attitude.

Thursday, December 14th, 1989
9PM CBS (2) (3) ISLAND SON (CC)–Drama; 60 min.
Sam (William McNamara), who’s certified, goes diving with a salvage crew and comes up with a serious case of the bends. Meanwhile, Tony (Timothy Carhart) may have to say sayonara to his romance with a Japanese-American whose father bitterly remembers being interned at Manzanar.
[New day and time.]

Friday, December 15th, 1989
9PM NBC (4) (30) TRUE BLUE (CC)–Drama; 60 min.
An Elvis fanatic (Eddie Mekka) holding a young woman hostage in a music store threatens to shoot her unless the ESU cops can produce his idol; Bobby and Jessy respond to a report of a possible jumper on the Williamsburg Bridge; Casey (Grant Show) contends with a mugger; and a radio station’s traffic copter plunges into the East River.

10PM NBC (4) (5) (22) MANCUSO, FBI (CC)–Crime Drama; 60 min.
Mancuso (Robert Loggia) investigates an FBI veteran’s murder, but the case blows up in his face when the CIA is implicated along with an Asian drug kingpin. (Repeat)

For readers in December 1989, this special issue looking back at the decade was probably very interesting. It wasn’t interesting for me 30 years later. On television, viewers had new episodes of nearly every soon-to-be obscurity to enjoy.

That’s it for this issue. Check back next week for my review of the December 16th, 1989 issue of TV Guide. As always, hit the comments with any thoughts or reactions.