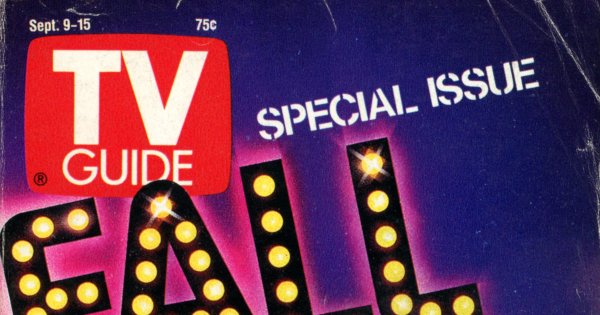 On the Cover: Art by Jeffrey Lynch

This is it. The 1989 Fall Preview issue of TV Guide. In place of the regular (and dull) articles and profiles, the issue is full of previews of the new TV shows debuting on the networks. The issue starts with an “Editors’ Choice” column, in which Chicken Soup (ABC) is declared the likely ratings winner of the new season due to scheduling (it follows Roseanne). But the TV Guide editors call The Famous Teddy Z (CBS) their favorite. Other new shows the editors like include Doogie Howser, M.D. (ABC), Mancuso FBI (NBC), Major Dad (CBS), Hardball (NBC), Open House (FOX), and Baywatch.

There’s also a look at specials (miniseries, made-for-TV movies, news and documentaries, variety, and spectacles); an overview of what to watch on cable this fall (feature films, original programming, golden oldies, comedy, music, documentaries, and sports); and new programming during the daytime.

Then come the night-by-night previews. Here’s a list of the new shows for Fall 1989:

Thursday
The Young Riders (ABC)
Top of the Hill (CBS)

Next is a preview of what public TV has to offer this fall, ranging from Masterpiece Theatre to Nova to Live from Lincoln Center to This Old House. There’s also a five-page preview of feature films on television, with Sunday night movies on all three networks, Monday movies on ABC and NBC, and monthly movies on FOX. Then comes sports, changes to returning shows, and syndicated programming.

[There is no TV Guide Insider in this issue.

[TV Guide Plus includes news reports and a list of series premieres by date.]

There are four news reports this week. Barbara Walters landed an interview with Fergie, the Duchess of York, beating out her ABC News competitors Diane Sawyer and Sam Donaldson of PrimeTime Live. Other reports: Thomas Ian Griffith will play Rock Hudson in ABC’s The Rock Hudson Story; Telly Savalas is returning as Kojak on The ABC Saturday Mystery; and CNN’s Crossfire is under fire for replacing Tom Braden with Michael Kinsley.

Two of the seven letters are about The Pat Sajak Show. Here they are:

I wish you and CBS would stop picking on Pat Sajak [“Cheers ‘n’ Jeers,” Aug. 19]. I find him to be a breath of fresh air. I happen to like the monologue in the middle of the show. Where is it written that the late-night audience has to watch a arbon copy of Carson? Next you’ll be complaining that his sidekick Dan Miller doesn’t react with phony laughs to all his jokes.
Carlotta C.
Cleveland, Tenn.

Regarding the slide in Sajak’s ratings, I hate to say I told you so. Arsenio Hall gets less hype but has a much more interesting show. CBS should never have canceled [the previous show in Sajak’s time slot] Night Heat.
Donna H.
Boston

Tuesday, September 12th, 1989
9:30PM ABC (8) (40) CHICKEN SOUP (CC)–Comedy
Debut: Comedian Jackie Mason plays Jackie Fisher, who quit his job selling pajamas to experience life and love with Maddie (Lynn Redgrave), a tall Irish Catholic mother of three. In the opener, Jackie’s mother Bea (Rita Karin) is not so happy to discover whom her nice Jewish boy’s been spending all his time with.

Wednesday, September 13th, 1989
9PM CBS (13) (35) (4) (22) (33) WOLF (CC)–Drama; 2 hrs.
Debut: Jack Scalia stars as Tony Wolf, a once respected San Francisco cop who was set up in a drug bust and kicked off the force. Now, two years later, he returns home to rebuild his life, the family fishing vessel and his relationship with his father Sal (Joseph Sirola).

Friday, September 15th, 1989
8PM NBC (4) (22) YESTERDAY, TODAY & TOMORROW (CC)–Newsmagazine; 60 min.
Scheduled: A report on emergency procedures aboard airliners includes the re-creation of a successful landing in 1971 of a DC-10 that experienced the same malfunctions that caused the July crash of United Airlines flight 232 in Iowa. Also: a piece on corporate espionage and a segment on plastic surgery as a means of enhancing a contestant’s chances in a beauty pageant.
[The drama “Baywatch” premieres next week at this time.]

The 1989 Fall Preview issue is a breath of fresh air after several months of boring profiles and limited original programming on the networks. I’m not very familiar with the 1989-1990 television season so I’m curious to learn more about the short-lived new shows that debuted during Fall 1989. This week sees the series premieres of Chicken Soup (ABC) and Wolf (CBS), neither of which survived the entire season.

That’s it for this issue. Check back next week for my review of the September 16th, 1989 issue of TV Guide. As always, hit the comments with any thoughts or reactions.